Was Napoleon good for the Jews? One historian says yes Editor’s note: This piece, originally published on August 13, 2015 to mark the bicentennial of the Battle of Waterloo, was re-published for Napoleon’s 253rd birthday on August 15, 2022.

The French historian Patrice Gueniffey, born in 1955, is director of the Raymond Aron Center for Political Research at Paris’s l’Ecole des hautes études en sciences sociales (school of advanced studies in the social sciences). His “Bonaparte: 1769-1802,” originally published by Gallimard in 2013, has recently been published in translation by Harvard University Press. The Forward’s Benjamin Ivry spoke with Gueniffey about the thorny subject of Napoleon and the Jews.

Benjamin Ivry: Napoleon was complex, to put it mildly, and his political and historical context even more so. Can it be said categorically whether he was good or bad for the Jews?

Patrice Gueniffey: He was, I think, ultimately rather good [for the Jews], because his policies for the Jewish community in France and the Empire promoted their assimilation into the French nation. The French revolution liberated the Jews but did not assimilate them. Napoleon took up the case again and decided to do for the Jews what he had done for other religions. The French Jewish community became Europe’s most assimilated during the 19th century.

In his “History of the 19th Century,” Jules Michelet writes of a “witty Englishman, Mr. Disraeli, who wished to make people believe that Napoleon was of Jewish origin.” What do you say?

There have been many myths and interpretations on the family origins of Napoleon. At Bonifacio at the extreme south of [his native] island of Corsica, there was a strongly established Jewish community, with many Italians but also Greeks. [François- René de Chateaubriand, who detested Napoleon, said he had African blood. Michelet, who detested him, said he had Jewish blood. We cannot know. [Napoleon’s] family came from Tuscany. Did he have Jewish blood? Who can tell? It’s possible, but his relationships with religions and peoples were always political in nature. When he dealt with Christians, Muslims and others, only political considerations mattered, not religious ones.

Many Jews of the time believed that Napoleon was their benefactor. Primo Levi has pointed out that in Italy, some Jews named their sons Napoleone in his honor, and in Germany, when Jews adopted family names, some chose Schöntheil, or Bonaparte in German. In France, Jews wrote Hebrew prayers to praise Napoleon during services and called him “Helek Tov” in Hebrew or “good portion” (bona-parte), as Ronald Schechter discussed in “Obstinate Hebrews: Representations of Jews in France, 1715-1815.” As he abolished ghettos and granted civil rights to Jews, convening a council, which he termed with biblical grandeur the Sanhedrin, Napoleon was admired by Rabbi Nahman of Bratslav and Rabbi Menahem Mendel of Rymanov. Were they all wrong?

Not at all. Readers of Martin Buber’s “For the Sake of Heaven” (1943) will recall how Buber describes Napoleonic legends in which some Hasidic rabbis saw in Napoleon an instrument of salvation, while others disagreed. At the time, there was still violent hostility against Jews in Italy and in Alsace. Bonaparte’s policy organizing all religions under the control and surveillance of the government was implemented against strong reticence among his own allies as well as the Catholic Church. In this context, Napoleon was at the forefront. He wasn’t far from [the French Roman Catholic priest] Abbé Grégoire, who also argued for the emancipation of the Jews.

In 1799, Napoleon’s supposed call for a Jewish homeland in the Middle East is discounted by most historians today. Why would such a fictional report have appeared in journals of his time?

In Paris, when it was discovered that Bonaparte had marched on Palestine, this rumor arose and articles appeared in newspapers. This was something like the ideas of the revolution, to emancipate sister nations. Bonaparte entered Palestine with a small army of 12,000 men with policies identical to those he had with Islamic nations, to watch over and protect them. In Paris there was a current of opinion seeking to emancipate Sephardic and Ashkenazi Jews, and this kind of rumor was meant to encourage Napoleon in his policies.

In a 1940 essay “The Great Beast: Some Reflections on the Origins of Hitlerism” Simone Weil compares Napoleon to Hitler as an authoritarian leader who terrorized the world. Was Napoleon Hitlerian?

Absolutely not. There was in Napoleon a side of monstrousness and madness. He never knew when to stop, which led to his downfall. There are analogies to be made, to be sure, between Napoleon and Hitler; they were both conquerors of Europe. Yet Napoleon still remains an heir to the age of light. And he believed in freedom as the basis for modern society. He is the son of a country based on centralization and governmental power, France, but in which the government, the monarchy, emancipated society from feudalism and church authority. So the [French] government was always a factor in freedom, against the nobility. Napoleon inherited all this tradition. Even though his story was unreasonable and a bit insane, it had reason behind it. 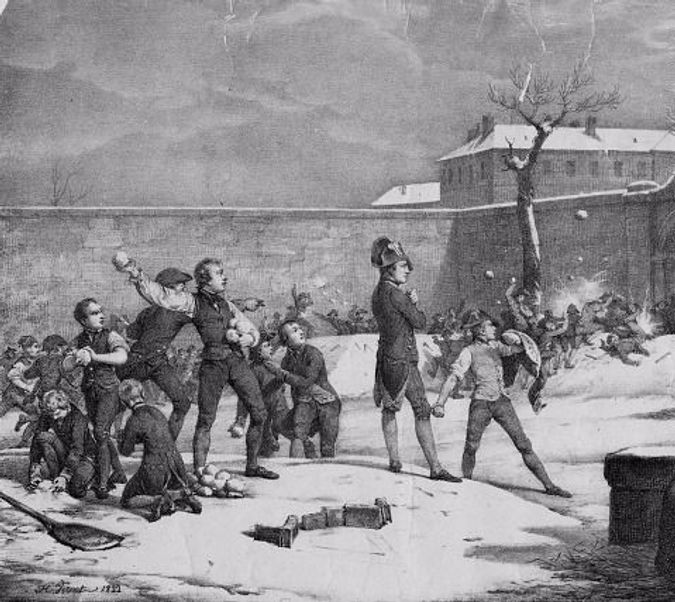 Since Napoleon was always seeking new recruits to fight for him, would he have heard about the Polish Jewish soldiers Berek Joselewicz and Joseph Aronowicz who fought for the military leader Tadeusz Kościuszko?

I think yes, and for him it was natural that as a result of their emancipation, the French Jewish community would then serve in his army. In his speeches he insisted a great deal on that. Service to the fatherland meant service in the army. Bonaparte had no prejudices; Egyptians, Sudanese, Jews from Alexandria were all integrated into the Imperial Guard. He also had no affection for anyone. He was neither anti-Semite nor pro-Semite; he felt neither hostility nor sympathy.

Yet the historian Richard Ayoun has stated that Napoleon “despised the Jews,” and merely used them for his own projects. Ayoun cites remarks made by Napoleon in 1817 during his exile in Saint Helena to General Gourgaud: “The Jews are a nasty people, cowardly and cruel.” Or when Napoleon wrote to his brother in 1808, calling Jews the “most contemptible of people.”

That must be put into context, especially any statement from Saint Helena. There Napoleon is also quoted as making the same type of comments about the Spanish. Like any person who speaks a lot and dictates a lot, many different kinds of things can be found in what he says. There is a difference between Napoleon’s private comments and public acts. To do good for a community, it is not necessary to love them. The vital thing for a national leader is to realize what is needed at the moment and pursue a policy. Whatever Napoleon’s feelings at the moment might have been, he did so. Take the example of the blacks. He used former slaves in his Imperial Guard. Yet when he heard that his sister had a love affair with the brother of [the author of African origin] Alexandre Dumas, he was furious that his sister had slept with a black man. But politics and national interest are another matter and Napoleon must be judged on this more than on his private comments. He was one of the European heads of state who based his policies on the idea of national interest, putting aside personal considerations.

The political language of the time was much more brutal. Today political speech is reduced to euphemisms that do not name things as they are. I have difficulty understanding these judgments of Napoleon which are so far from the political reality of things. The Grand Sanhedrin of 1807 convoked by Napoleon was about the will of the Ashkenazi Jews to integrate, to ask them to which point they were ready to assimilate into the national community in exchange for full rights of citizenship. To not be victims of discrimination, they were asked to renounce part of their customs. In 1789, Sephardic Jews, as French Jewish historian Robert Badinter has explained, had opposed emancipating France’s Ashkenazi Jews because they were too different and would not accept mixed marriages.

In 1808, Napoleon’s so-called Infamous Decree limiting the residency of Jews in France, taking away freedoms, and harming them economically, was done to appease Tsar Alexander I of Russia as a temporary measure.

This was a provisional decree for which there were diplomatic motives, because Russia was hostile to French policies toward Jews. Political success depends on momentary concessions to opponents of any policy and Napoleon did similar things elsewhere.

In 1827, Jean-Baptiste Pérès published a spoof claiming that Napoleon never existed. If indeed Napoleon had never existed, would the assimilation of Jews into Europe have occurred without him?

I think for France, yes, because it was in the spirit of the times. Integration and assimilation were demanded for a long time; the idea of civilization demanded them. In 1787, Protestants were reintegrated in France, and Louis XVI asked the political scientist the Marquis de Condorcet to work on emancipating the Jews. Napoleon continued what the monarchy had begun. Without Napoleon, it would have happened in a less authoritarian way, with everything happening fast, without any discussion, but the idea was part of 18th-century civilization. The Revolution overthrew the Church and removed the Church’s political means to oppose it. Napoleon had no powerful opposition to this movement.

Should readers of the Forward share the view of the author François-René de Chateaubriand, who admired Napoleon’s “genius” but loathed his “despotism”?

Yes, today, of course. Of course. With Napoleon, there is something worse than despotism, there is a feeling that one can do anything with reality, one can change everything, and with him that was doubtless the most dangerous. He really thought anything was possible; he had an absence of limits in his mind. At the same time, there was a principle of endless adventure, which could only end in catastrophe. A totally positive judgment about Napoleon is absurd and a totally negative view, as some historians have today, is equally absurd.