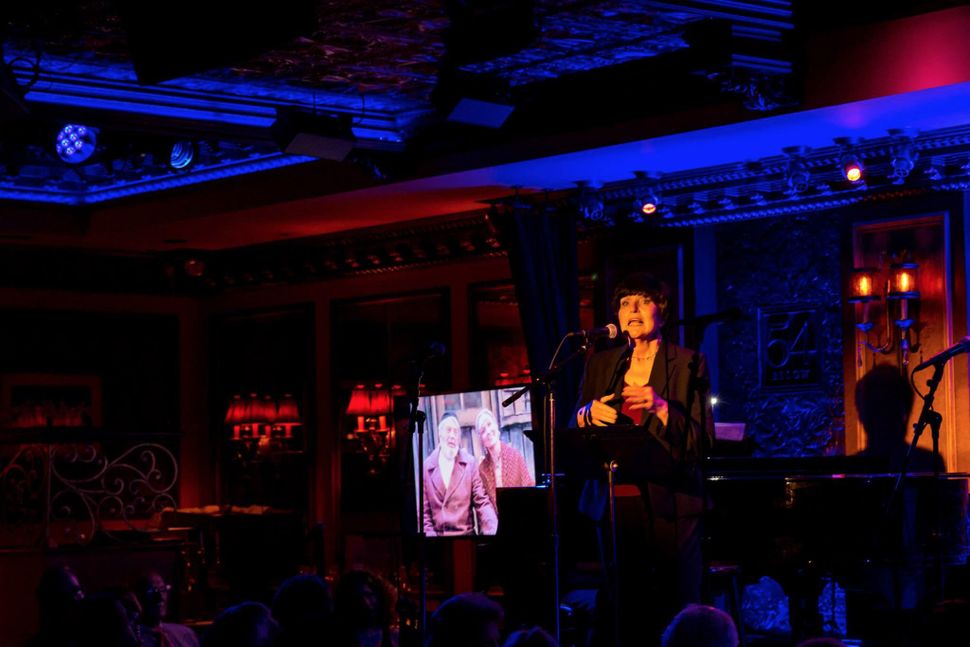 What’s so Jewish about Broadway? The National Yiddish Theater Folksbiene’s production of “Another Hundred Years” showcases the Jewish influence on Broadway from the beginning of the 20th century until the present day. Last week’s one-time performance gave us a preview of the extended 90-minute version of the show in the works for the near future.

On each side of a wooden staircase leading down to the supper club 54 Below are dimly lit black and white photos of flappers and old Broadway stars, hanging on red velvety wallpaper. The neon bustle of Times Square is only a few blocks away, but already, eras have come between the cozy club and the outside world. The retro look easily lends itself to the nostalgic spectacle. “Another Hundred Years” celebrates the Folksbiene’s 101st season, and is part of the Kulturfest Encore Series.

Showtune enthusiasts and lifelong “Fiddler” fans noshed on latkes and “franks en croute” (pigs in a blanket), while sipping wine and watching as Broadway stars performed songs composed by Jewish musicians throughout the last century. Chris Massimine, who conceived and produced the show, called it “the story of Broadway that not too many people know,” explaining that the impact of Jewish songwriters and Jewish culture shapes how we see entertainment on Broadway.

The show began right before the Great Depression hit, chronicling the history of Tin Pan Alley to 1940s operettas to the present. Featured songs, such as those by George and Ira Gershwin, showcased the influence of klezmer on jazz and the blues. In the “Golden Age” of Broadway, after the Depression ended, the music shifted to more upbeat tunes by Israel Isidore Baline – known as Irving Berlin – and Rodgers and Hammerstein.

“Another Hundred Years” also served as a tribute to Theodore Bikel, the actor, activist and union hero who passed away this July. Austrian-born and Jewish, Bikel played Tevye in “Fiddler on the Roof” from 1967 onward, and was the first to perform the role of Captain Von Trapp in “The Sound of Music.”

Longtime friends and fellow actors from “Fiddler” sang songs from perhaps Broadway’s most Jewish spectacle and told anecdotes about Bikel, who was endearingly known as “Papa.”

Rebecca Goodwin, who played Golda in the 1995-1996 production of “Fiddler on the Roof” remembered “Papa’s” rich voice when he told stories after a show, playing guitar, and totally vibrant well into his 80s.

The third part of the show followed the history of Jewish composers through the 60s, the growing tension between classes, and an America divided over Vietnam. With the rise of nonprofit theater in the 70s, the show’s narrator described the decade as a “playground for arts on a budget.” Songs featured included “Autumn” by Maltby & Shire and “I’m Still Here” by Stephen Sondheim.

The show’s cast itself, while singing tunes written and composed by Broadway’s Jewish legends, had themselves been part of Broadway history, too. Among the the cast included Loni Ackerman from Cats; Russel Fischer from Jersey Boys; Sean McDermott from Grease; Maddy Trumble from Wicked; Alan Wiggins from The Lion King; and Jessica Mortellaro from The Wizard of Oz.

As the show ended, pink lights flashed on the entire cast, who performed an encore from William Finn’s “Heart and Music.” By then, the audience was clapping along.

“Another Hundred Years” is the Folksbiene’s first show totally in English. “It’s a good intro to Yiddish theater, Jewish culture, and the importance of that kind of show at a 100-year-old institution,” said Massimine. “It’s a story that everyone can enjoy.”