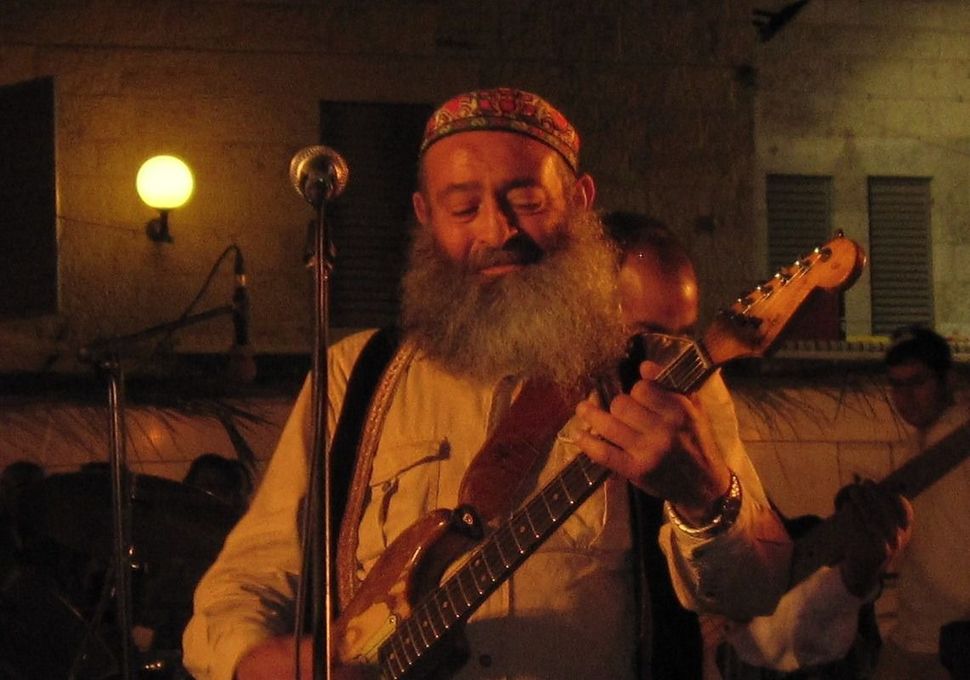 Legendary Jewish guitarist Yosi Piamenta died on August 23 after a difficult struggle with cancer. He was 64.

Piamenta was a virtuoso guitarist who had a long career performing original music as well as traditional Jewish, Israeli and Arabic songs arranged in his signature style.

Born in Israel on November 29, 1951, Piamenta moved to the U.S. in his mid-20s to play and record with saxophonist Stan Getz, but their collaboration was never commercially released. (You can see a video of a Piamenta-Getz performance in 1977, in Israel, here.)

Shortly afterwards, he abandoned his focus on secular music, became a Lubavitcher hasid, and together with his brother Avi, a virtuoso flautist, became popular on the Jewish music scene, releasing numerous albums through the 1980s and ‘90s, including “Mitzvah,” “Tismach,” “As You Like It,” “1990” and “Strings of My Heart.”

Piamenta’s guitar sound was immediately recognizable, not just because of the gear he used, such as a Fender Stratocaster and Mesa Boogie amplifier, but because of his tone, articulations, and ornamentation, which were deeply rooted in Middle-Eastern music. Loud, extended guitar solos and jams were also signature elements of Piamenta’s sound.

Piamenta’s look was also unique; he was proud of his Judaism, and always wore a large colorful Sephardic kippah, with his tzitzit hanging out, and a large bushy beard. A genial man, he was always accessible at his shows, willing to talk to fans, and even to invite them back to the dressing room for ma’ariv prayers.

Music writers often referred to Piamenta as “The Hasidic Hendrix” or “The Sephardic Santana,” but to me, those titles always rang false. Although Piamenta’s guitar tone was rooted in psychedelic rock, his sound and approach were individual, blending rock timbres with Arabic modes in a very personal style. A pioneer of the electric guitar in Jewish music, Piamenta influenced many Jewish musicians, including virtually every religious guitar player active on the New York bar mitzvah and wedding circuit.

Many highlight his collaboration with Stan Getz as “proof” of how good he was. But this misses the point of what he was about. Piamenta wasn’t good because one jazz legend heard something in his playing. He was good because he had soul and serious chops, passion, creativity, and energy, and he always played his heart out. In an era of cookie-cutter performers he broke the mold, producing compelling Jewish music that was both fresh and traditional in the deepest sense.

Piamenta took his musical vocabulary and applied it to a variety of Jewish music styles: old nigunim, Sephardic pizmonim, Arabic songs, and Hasidic pop. No matter the genre, his sound and approach was always immediately identifiable. I am hard pressed to pick another Orthodox instrumentalist who can be identified with only a few notes.

The first time I heard Piamenta play live was when a high school friend decided to pick up the electric guitar, learning Piamenta’s riffs and solos off of recordings by ear. Shortly afterwards, his father hired Piamenta to perform at a private birthday party for him. There were about a dozen of us in attendance in a synagogue basement in Kensington for that show. Piamenta and his brother Avi, together with a bassist and one of our friends on drums, proceeded to perform with the same energy and enthusiasm they’d have given at a large concert. It was incredible to see and hear the sounds that I knew from the recordings come alive in front of me.

I also saw Piamenta perform with his band at Wetlands in New York City numerous times, playing burning modal guitar solos over Middle Eastern tunes, a cigarette clutched in his picking hand or stuck into the strings at the top of the guitar neck, while the entire room grooved along to his music on the dance floor. A flashy performer, Piamenta would sometimes play solos with the guitar held upside down behind his neck.

Over the years, the Piamenta brothers had a few dance hits, mainly using borrowed pop songs like Men at Work’s “Land Down Under,” which they released as “Asher Bara,” and Tarkan’s “Turkish Kiss,” which they released as “Kol Hamesameach.” They also had a dance hit with a samba-esque setting of “Siman Tov.” All three of these tunes are still played at weddings today. In fact, the wedding band I played with on the afternoon of Piamenta’s passing threw “Siman Tov” into their second dance set, before they heard news of his death.

Piamenta leaves behind a rich musical legacy including recordings, an influence on many musicians, and an enhanced repertoire of Arabic and Middle Eastern tunes that are, thanks to him, now familiar to the Ashkenazi community as well.