Why My Son Won’t Be Having a Bar Mitzvah 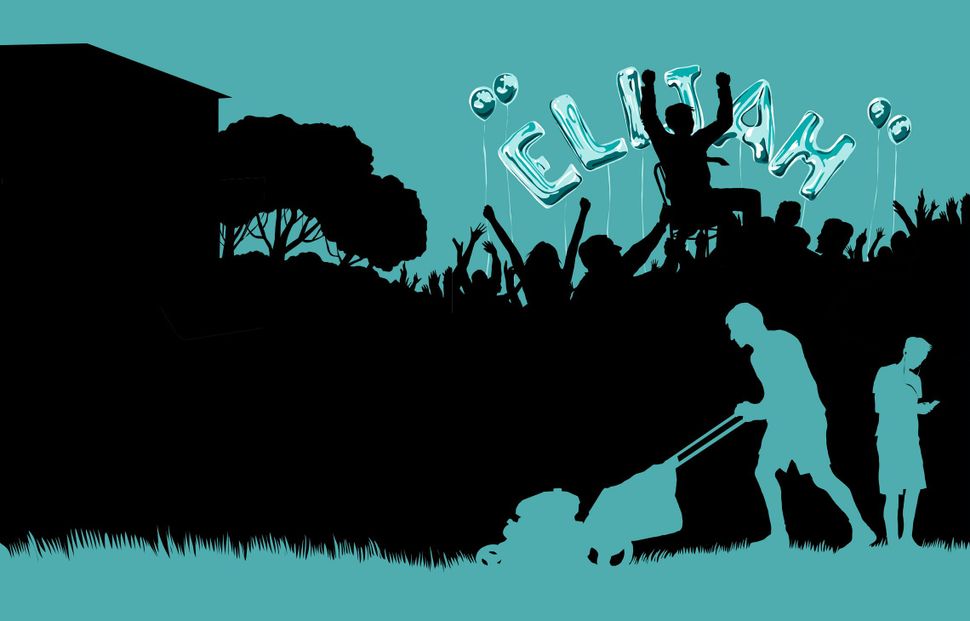 My son, who’s turning 13 on Halloween, won’t be having a bar mitzvah. This is what’s happening, or not happening. The entry in the Book of Life has been written, the invitations not sent out, the food truck and DJ not ordered. I feel shame and guilt and other emotions that I can’t identify, for reasons that I don’t quite understand. Most of the time, I can push those feelings to the back of the silverware drawer of my mind, but as my numerous Jewish friends (not to mention my sisters and cousins) begin to send out the save-the-dates, it’s going to get harder. We are the only ones.

It’s not as though we didn’t try. Even though my wife isn’t Jewish, we have a mezuzah on our doorpost and a menorah in the china cabinet. At Passover, we serve the soup and make the Hillel sandwiches and sing Dayenu.

“Is it a Jewish household?” people ask. We don’t keep kosher and don’t light the Shabbat candles, but that didn’t happen in my household growing up, either, and it was one of the most Jewish households I’ve ever encountered. In my current house, we discuss the Middle East very loudly and often curse in Yiddish. So, I don’t know. It’s a Jewish house, maybe? Don’t blame the household. Teenagers have mounted the bimah with far flimsier backgrounds.

When Elijah was getting ready to start third grade, we joined a temple and enrolled him in Sunday school and Hebrew school. For the first couple of years, he seemed to enjoy himself. He made friends and talked with vague interest about stuff he’d learned. We did flashcards with the Hebrew alphabet at home. My wife and I went to Sunday potlucks. Even though I felt less actual community at those events than I do at yoga class or trivia night or on Twitter or in the airport security line or pretty much anywhere else, there were plenty of other guys just sitting on their laptops while the potluck swirled around them. It’s not as though they were forming prayer minyans or planting trees in Jerusalem. My son ran around with his Jewish friends, he had fun. We were on the track.

Then, Masada began to crumble. Elijah started complaining about having to stay after regular school for Hebrew school (in a rare coincidence, they were in the same building). He whined and moaned about getting up for Sunday school. But who doesn’t? What kid, from the dawn of time, has enjoyed Hebrew school? I hated every second of Hebrew school back in the ’80s in Phoenix, that great Jewish desert.

Was he having social trouble?

Was he having trouble with the material?

“He’s a nice boy, very cooperative, and he does a great job in class,” said his teacher.

Still, it got worse. He refused to go to Sunday school, to the point where we found ourselves dragging him to the car without his shoes on. He would call us at noon on Wednesdays, saying that he was sick, but really, it was a Hebrew school allergy. And then, finally, the dreaded words came:

“What are you talking about?” I said.

“That’s not the point. You are going to do this.”

I took him to Rosh Hashanah services anyway. They lasted three and a half hours. He slid down in his seat, looking pale, withdrawn, almost deathly ill. I don’t know if any of you have ever looked into your children’s eyes and seen a vast spiritual emptiness, but it was there, and it terrified me.

More distressingly, I felt it, too. After services, I stood around talking to someone I knew, and someone I didn’t. An upcoming Bat Mitzvah in Newport Beach, California was discussed, as were costs that approached what I make in a year. The logistics seemed impossible, not to mention prohibitively expensive. Even a bar mitzvah on the cheap would be a multi-thousand-dollar outlay. The materialism and competitiveness bordering on hysteria sickened me. I thought, “This is not my movie.”

“We will throw one party,” my mother said, when I discussed my financial concerns with her.

Later, my wife said, “What did she mean one party? I thought there was only one party.”

Little did she know. My own bar mitzvah had been a baroque affair with a Friday night party and then a Saturday afternoon party and a Sunday morning party, a massive celebration of family, friends and me. That seemed daunting now. None of my relatives live in town. Was I going to have to reserve hotel blocks? Where? How was everyone going to eat? Did I need to rent a shuttle bus?

But I didn’t share my fear of logistics and finances with my son. No matter the cost, I was willing to do it, for tradition, for my parents, and for the fact that I have one child. He needed to carry on for his people, for the Jews. Independently, though, he wanted nothing to do with his bar mitzvah.

As sixth grade arrived, most of his friends had bailed on Hebrew School for private tutors.

“Can’t I have a private tutor?” he said.

“The temple offers good Hebrew school for free,” I said.

He could understand “we can’t afford it,” but he continued to ask:

That was the key statement. I’d raised my son to be aware of his Jewish identity, but I’d also raised him to think independently and critically. In his own naïve way, he was doing that. I wasn’t about to tell him that his thoughts and feelings were invalid. So I put the bar mitzvah on pause, but I wasn’t going to let him pull the haftorah plug just yet.

My wife and I decided that Elijah needed to talk to the rabbi, a nice man about my age, an East Coast liberal with a laid-back attitude, not some aloof figure that my son feared. The rabbi’s daughter and my son were actually friends. He seemed concerned about Elijah’s doubts, but not overly concerned.

“This happens sometimes with the smart kids,” he told me. “Let me talk to him. The worst thing that can happen is that he’ll have the memory of discussing with the rabbi about whether or not he should have a bar mitzvah.”

The worst thing happened. Elijah talked to the rabbi for an hour. On the drive home, I said, “So how’d it go?”

“Well, I told him I didn’t believe in God. He said it was normal to be skeptical or not believe, but that you can still have a bar mitzvah. Being Jewish is about more than memorizing prayers and believing in God.”

“But I’m still not going to do it. Because I don’t feel Jewish.”

That was when I knew: My son’s bar mitzvah was dead. Moses had descended from Mount Sinai with less certainty.

My parents weren’t pleased that their first-born grandchild wouldn’t be bar mitzvahed. They hadn’t prepared for this nightmare. Mostly, they blamed me. “His father is ashamed and amused by being Jewish and sometimes seems downright anti-Semitic,” my mother emailed. But she summed it most accurately by saying to me, “I just don’t understand!” They have a simple and understandable point of view. My grandparents, on my father’s side, escaped the Nazis in the 1930s, and denying a Bar Mitzvah means denying that heritage.

But from my son’s point of view, he’s not denying anything. He’s aware of the history, but this isn’t about history to him. He reads the news, and he’s seen the violence perpetrated daily in the name of organized religion. Even though reform American Judaism is about as violent as Quakerism, he stands in opposition to joining the pack. No amount of idealizing or fantasizing about the speech I was going to give at the reception will change his point of view. We can’t make Elijah study or read his Torah portion, and I won’t drag him in front of the ark and force him to bow his head to a God in which he doesn’t believe. No matter where his paternal great-grandparents were born, my son doesn’t identify as Jewish. I have to respect his decision. In a reverse Tevye, there is no other hand.

My feelings of failure and inadequacy intensify as more people I know become Proud Parents of the B’nai Mitzvah. This week brought an album of Facebook photos from a college friend, in Israel celebrating the bar mitzvahs of her smiling, tallit-wearing twin 13-year-old sons. I felt glad for her, but I felt something else as well, something deeply regretful and longing. It was another reminder of my failure, just like the photos of a friend’s daughter playing the ukulele with a full orchestra at her bat mitzvah party, or any mention of any bar or bat mitzvah occurring anywhere. When it comes to “today I am a man,” the happiness of others registers as my loss.

But I also look at Elijah and think, well, he’s empathetic, intelligent, gets good grades, exercises occasionally, eats well, is kind to children and animals, has a strong sense of morality and social justice, isn’t racist or homophobic, has defendable taste in books and movies, usually does his chores, and shows polite respect to his friends’ parents. So maybe I’m not a total disaster as a dad. He’s a good kid, and the Jewish community would be lucky to have him.

But he’s not going to be a bar mitzvah right now, and I don’t get to experience some kind of ironic plot twist like on “Transparent.” I won’t be escaping to a transgendered support group on that weekend in February. I’ll just drink coffee and watch Bill Maher like I always do. If it doesn’t rain, I might mow the lawn. That will be a sad, boring day.

Maybe Elijah will come around once he sees his cousins getting all the money and adulation. It’s possible that he’ll regret skipping a major life milestone, and that he’ll want to fill the gap. He could feel Jewish someday.

But if he doesn’t, we’ll deal.

Why My Son Won’t Be Having a Bar Mitzvah