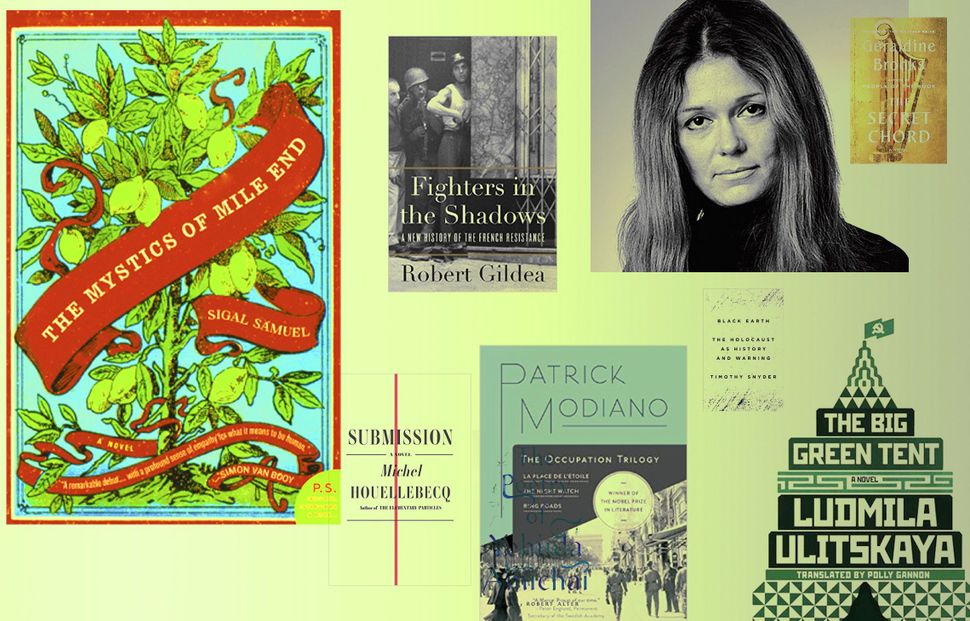 The tangled relationship between history and myth is one theme that emerges from our idiosyncratic and speculative preview of fall books. It should be fascinating, for example, to compare French Nobel laureate Patrick Modiano’s novelistic deconstruction of the French Resistance with Robert Gildea’s revisionist historical overview of the same subject, “Fighters in the Shadows.” Geraldine Brooks’s “The Secret Chord,” about King David, resorts to fiction to treat a mythic story.

There is also an interesting tension within the never-ending stream of Holocaust literature between the power of a single voice — in this case, that of a teenage ghetto diarist who’s already being compared to Anne Frank — and the epic sweep of a book like Timothy Snyder’s “Black Earth.” Snyder takes a fresh stab at explaining the Holocaust, while the persecuted Rwyka — facing the whirlwind — is tormented by questions of why.

Americans generally read very little literature in translation, but, alongside the Modiano, we’re looking forward to the definitive collection of Yehuda Amichai’s poetry and politically charged novels from Russia (“The Big Green Tent”) and France (“Submission”).

Finally, we’ve found a few characters — the audacious Peggy Guggenheim, the mysterious Nazi art dealer Hildebrand Gurlitt, and the inimitable Gloria Steinem — whose lives have been big, bold and characterized by defiance of authority. We can’t wait to learn more.

In his award-winning “Bloodlands,” Snyder, a professor of history at Yale, mined newly available archival sources to analyze the killing of 14 million non-combatants by the forces of Hitler and Stalin in an area that included modern-day Poland, Ukraine, Belarus, Russia and the Baltic states. “Black Earth” may be even more ambitious: It attempts to explain the Holocaust at least partly as a phenomenon arising from ecological fears and the destruction of states. Snyder also sheds light on the rescuers and worries about 21st-century global threats.

Rywka’s Diary: The Writings of a Jewish Girl from the Lodz Ghetto
By Rywka Lipszyc and Anita Friedman
Harper, 240 pages, $35
Published September 15

Originally published last year by the Jewish Family & Children’s Services Holocaust Center of San Francisco, this is the first trade edition of the diary of a 14-year-old Polish Jewish girl from the Lodz ghetto. Rywka chronicled the ghetto’s hardships, the deportations, and the loss of her entire immediate family, but retained her faith and determination to live. The diary was found in 1945 in the ruins of the Auschwitz-Birkenau crematoria by a Soviet Army doctor after the camp was liberated, and was brought to America by the doctor’s granddaughter. Rywka herself survived Auschwitz, a death march and other Nazi camps, but her precise fate remains a mystery. Her writings are supplemented by photographs, newspaper clippings, maps and commentary.

Ronald uncovers the backstory of the stunning discovery in November 2013 of more than 1,400 artworks in the Munich apartment of the reclusive Cornelius Gurlitt. Gurlitt’s father, Hildebrand Gurlitt, was a Nazi art dealer who looted private Jewish and museum collections. According to Ronald’s book, he duped both the Monuments Men and Hitler before passing the art on to his son.

The novelist Francine Prose tackles the great art patron Peggy Guggenheim (1898-1979) for the Jewish Lives series. Guggenheim, an advocate for the avant-garde, was known for her good taste in art and bad taste in men, combining disastrous marriages with numerous affairs. The common thread in what Kirkus Reviews calls “an adroit and lively portrait” may have been her desire to shock convention.

My Life on the Road
By Gloria Steinem
Random House, 304 pages, $28
Published October 27

One of feminism’s leading lights, a co-founder of Ms. Magazine, and an avid campaigner for progressive ideals, Steinem tells the story of her itinerant life and the growth of the women’s movement. Despite her celebrity, Steinem remains a surprisingly modest and appealing figure, and this long-awaited memoir should offer some insight into her personality as well as her politics.

Fighters in the Shadows: A New History of the French Resistance
By Robert Gildea
Belknap Press, 608 pages, $35
Published November 30

Gildea, professor of modern history at Oxford University, seeks to disentangle the French Resistance from myth. In his telling, it was a diverse, internally contentious movement that sometimes pitted Communist revolutionaries against more conservative forces. He draws on first-person accounts from participants, who included Spanish Republicans, Italian anti-fascists, British and American agents, Hitler’s German opponents, as well as French and foreign Jews.

Not many Americans had even heard of the French novelist Patrick Modiano, let alone read him, when he won the 2014 Nobel Prize. So the paperback publication of his landmark trilogy, in a contemporary English translation by Frank Wynne, is a major literary event. The three books — “La Place de l’Étoile,” “The Night Watch” and “Ring Roads” — explore the moral complexities of resistance and collaboration in occupied France. The first book has never before appeared in English, and the other two have long been out of print.

The Pulitzer Prize-winning author of “March,” “Caleb’s Crossing” and “People of the Book” tackles the history and legend of King David as he rises from shepherd to king and devolves into a despot. Brooks’s novel presents David through the eyes of the prophet Natan, three of his wives, and his son Solomon. Brooks’s forays into historical fiction typically combine literary grace and readability.

This debut novel by Forward editor Samuel, set in Montreal’s Mile End neighborhood, is a charmer about the appeal of Jewish mysticism and the bonds of family. It was greeted rapturously in Canada, with the Globe and Mail saying it inspired “wonder at a well-ordered and meaningful world.”

The controversial Houellebecq, author of “The Elementary Particles” and “The Map and the Territory,” ventures into charged political territory: It’s 2022, France is taken over by moderate Islamists, and Jews flee the country. With the prospect of polygamy as a lure, what’s a decadent, atheistic Parisian academic to do? Is submission to the prevailing order the only sensible course? Le Parisien has called the novel “the most politically incorrect of all Houellebecq’s books,” and one that “plays with the fears and fantasies of our time.” By a frightening coincidence, the French edition appeared on the day of the Charlie Hebdo massacre.

Translated into 40 languages, Amichai (1924-2000) is widely considered Israel’s leading modern poet, and this is the most comprehensive English-language collection of his poetry to date. The German-born Amichai became a master of the Hebrew vernacular, and his poems celebrate love and the preciousness of ordinary experience against the backdrop of Israel’s war-ravaged history.

A classic Russian novel by a geneticist who became one of the country’s leading contemporary writers, “The Big Green Tent” traces the lives of three school friends who meet in 1950s Moscow and are drawn to the Soviet dissident movement. This cannot end well. Writing in the New Yorker, Masha Gessen called Ulitskaya “a voice of moral authority for differently minded Russians,” and the novel itself “compelling, addicting reading.”