Why the Blood Libel Won’t Die 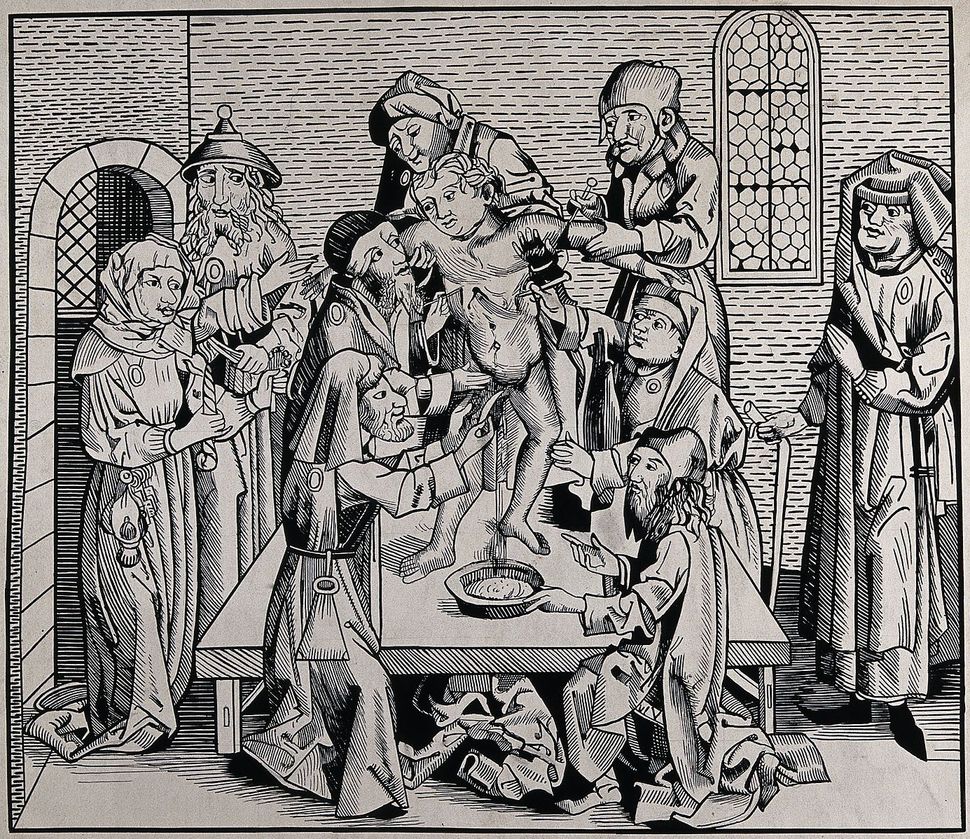 In “The Murder of William of Norwich: The Origins of the Blood Libel in Medieval Europe,” Emily Rose, a historian who has taught at Johns Hopkins, Princeton and Baruch, among other universities, explores long-standing false accusations that Jews murdered Christian children to use their blood in ritual ceremonies. From the Middle Ages to the present, such allegations — despite having no basis in fact — have repeatedly served as justification for the murder of Jews. The Forward’s Benjamin Ivry recently spoke with Rose about this unfortunate (and still relevant) medieval history:

In 1144, Jews of Norwich, England, were accused of ritual murder after a boy, William of Norwich, was reportedly found dead in a forest. A translation of the medieval account of William of Norwich’s death by the Benedictine monk Thomas of Monmouth is just out from Penguin Classics; a novel by Bill Albert, “Norwich 1144: A Jew’s Tale,” was published in 2014, and in 2012 Hannah Johnson’s “Blood Libel: the Ritual Murder Accusation at the Limit of Jewish History,” appeared. Why is the blood libel such a hot subject?

It combines popular religion, the interaction between Christians, Muslims and Jews, and understanding how peoples are denigrated, so it is part of a broader discussion of how people and races and groups become dehumanized. And it lasts for centuries. This blood libel is the quintessential demonization of a people, the one that lasted the longest and caused the most horrific executions.

An estimated 150 cases of blood libel resulted in the killing of Jews. Since many people died as a result of these calumnies, should the term blood libel be revised, since it merely implies defamation?

I think the blood libel is probably a good term. We need to understand how powerful a myth it was. It led to torture and death by pogrom.

Gabriel of Belostok, a 6-year-old supposedly murdered by a Jew in 1690, was canonized by the Russian Orthodox Church. As he is increasingly worshiped by the faithful today, especially in Belarus where the U.N. Refugee Agency sees the cult as a “dangerous expression of anti-Semitism,” does this cause more concern than legendary characters from 500 years ago?

Absolutely, except that we cannot address the myth until we know how it started. The saints I talk about are not that important, but the story is important. There are a lot of people who believe that there is no smoke without fire. In this case, there was lots of smoke, but no fire.

In the 16th century, Suleiman the Magnificent, Sultan of the Ottoman Empire, issued a royal decree denouncing blood libels. Do Islamic believers in the blood libel conveniently overlook this precedent?

Absolutely. It has been denounced by leading Christians and Muslims, civil and religious authorities, and yet it hangs on. That is the lesson — that these beliefs can persist for centuries and pop up at certain times. There is an absolutely continuous belief.

In 2003, the Egyptian diplomat Osama Al-Baz placed the blood libel among “racist fallacies and myths that originated in Europe.” Why are people from the Middle East so influenced by European legends?

Opportunism. At one point it is clear that adopting the blood libel is perceived in the Middle East and Eastern Europe as part of the Western modernizing tendency. Even if the idea is about 150 years behind the times.

In 1955 at Lincoln Cathedral in the U.K., representatives of the Anglican Church placed a plaque at the site of a former shrine to Little Saint Hugh of Lincoln, who died in 1255, leading to another blood libel. The plaque apologizes for “trumped up stories of ‘ritual murders’ of Christian boys by Jewish communities … These fictions cost many innocent Jews their lives … Such stories do not redound to the credit of Christendom.” Have any other religions expressed contrition for the result such lies have had?

A number of English churches have plaques like that. There is a debate in Europe about how to treat these sites. Some believe that the best way is to take away any indication that a pogrom happened, or that the accusation was made and a child venerated. [Some churches] don’t want people to look at the pictures today. Other scholars believe it is important to note that this is the place where things happened. There are people on both sides on how to treat a belief that is no longer believed. If there is a purported stone where a Jew supposedly sacrificed a child, do you take it away, put it in storage? St Paul’s Church in Sandomierz, Poland, has a disgusting fresco of a blood libel — it’s very fraught. They can’t decide whether to destroy it, keep it or explain it, so they keep it behind a curtain. A majority of the people in the area believe it actually happened, because seeing is believing.

In his “Apology,” written in the second century C.E., the Church father Tertullian complained that Christians were being accused of baby-killing and even baby-eating. Were other religious groups or minorities also accused with blood libels, or has this been a uniquely Jewish affliction?

Throughout history, lots of groups have always been accused of killing children, and particularly in the 20th century Jews pointed to this to show that these accusations are not specific to Jews. Yet by focusing on this, Jews missed what made the blood libel so particular. It’s not just that the Jews were accused of killing a child, but by killing the child, mocking the Christian savior or re-enacting the killing of God.

In his “Selected Essays,” the author Ahad Ha’Am found consolation in the existence of the blood libel — as justification that “everybody can be wrong, and the Jews right.”

There is something we can learn: If you tell a lie often enough, it is absolutely believed. To know that and see that is important for everyone.

In 2011, after the Tucson shooting of U.S. Rep. Gabrielle Giffords and others, former Alaska governor Sarah Palin called herself the victim of a “blood libel” by advocates of gun control and her other political opponents.

Sarah Palin’s use of the blood libel and the reaction it provoked shows that it is a very powerful term even today in our culture, one that gets immediate response. You can argue about how it’s interpreted, but people have a visceral reaction to it, and know it’s bad.

In 2014 during a pro-Hamas rally in Seattle, marchers brandished posters showing Jews eating Christian children with a cup of blood to drink.

The visual imagery has continued from the Middle Ages to today. Those pictures make people believe the blood libel, even more than the stories. I think you have to explain how it got started. As long as people believe that the origins are lost in the mists of time, then it must be true. If I can demonstrate how contingent — rooted in a particular time and place with particular people — it is and how it got started, that is an important step in debunking the story. There is an identifiable reason why people were telling these stories about these Jews in that place. The blood libel was a pretext for something else. It is not rooted in Jewish behavior. Once it is available to be used, it can be evoked when they have a reason to. Very often that reason has little or nothing to do with Jews. Sometimes it was to get money or make their town more famous as a place for pilgrimages. Jews are the collateral damage — the focus that allows other goals to be achieved.

Why the Blood Libel Won’t Die