Blowing the Shofar in Cairo 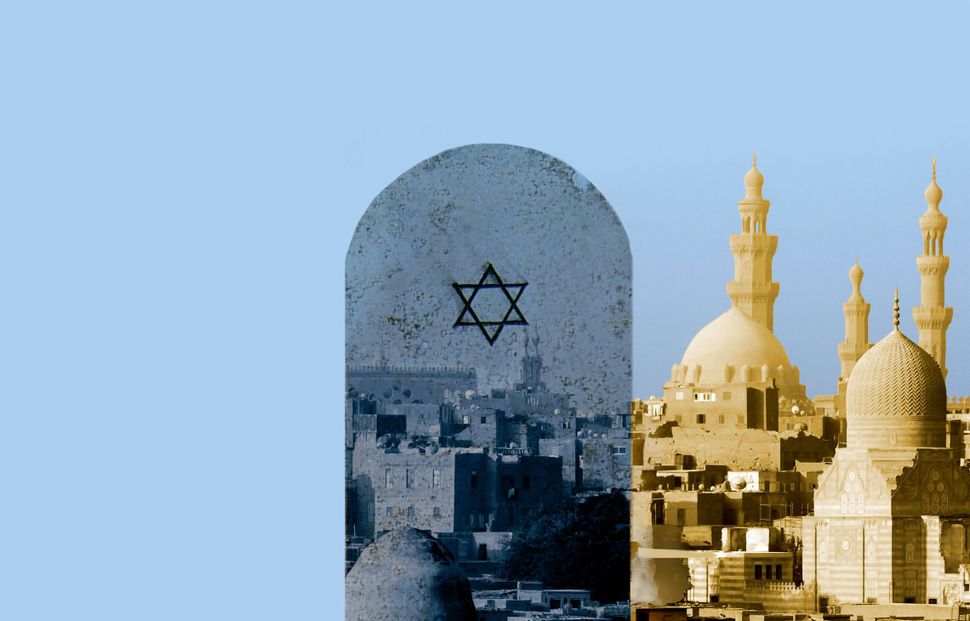 ‘Have you ever prepared a Jewish body for burial?” It was Saturday morning, April 13, 2013. The person on the line had called me hours earlier to let me know that Carmen Weinstein, leader of Cairo’s Jewish community, had died.

I had arrived in Cairo nearly eight months earlier to work at the U.S. Embassy, and Weinstein was one of the first people I met. She was in her early 80s, the “Iron Lady” of Cairo’s Jewish community. She had seen the community dwindle in her lifetime to less than two dozen mostly octogenarian ladies from more than 70,000. Weinstein’s mission was simple: Religious festivals would be celebrated, and people would come — from old ladies to expat Jews. I became her trusted American adviser to make sure butts were in the seats for Hanukkah, Purim and Passover. She regaled me with tales of Cairo’s religiously pluralistic pre-1948 past, when Jews, Muslims and Christians lived together relatively harmoniously.

“I’ve never done that before, Magy, but I can find out how.”

Magda Tania Haroun Silvera (known to me as Magy) had called me earlier that morning to tell me about Weinstein. Magy and her sister, Nadia, became my Jewish mothers after a chance meeting at a Hanukkah celebration, when I was surprised to learn that Egyptian Jews younger than 60 existed, and that they lived around the block from me. The sisters never hesitated to ply me with food, tea, coffee, sweets and stories of the olden days.

With that call I became Cairo’s chevra kadisha, after quickly Googling “chevra kadisha” and finding the Park Slope Jewish Center’s guide. Magy and Nadia picked me up, and we made our way to the Italian Hospital in the Abbasiya section of Cairo. Magy, Nadia and an orderly looked to me for direction as we stood over Weinstein’s body. I asked for the buckets of water and the sterile sheets, and gave directions regarding the washing, purification and wrapping. It was an emotionally exhausting day — not just because it was my first experience preparing a Jewish body for burial, but also because it was a changing of the guard. Weinstein was no more; Magy (the new president) and Nadia (the new vice president) were now in charge.

Magy and Nadia did a masterful job of organizing a dignified funeral and burial. To foreshadow the new character of Cairo’s Jewish community, they publicly announced that the first day of shiva would be held at the central Adly Street synagogue, Sha’ar Hashmayim.

Dozens of friends and curious local observers who did not know that Cairo still had Jews came to pay their respects.

The ousting in July 2013 of the Muslim Brotherhood, and the deterioration in security, made it difficult for the Harouns to continue public Jewish celebrations. I convinced Magy that Rosh Hashanah and Yom Kippur services were important: On Rosh Hashanah I read from the Torah and blew the shofar for a group of eight, but the service was short; hours earlier, the interior ministry had been unsuccessfully targeted in a suicide bombing, and synagogue security was nervous. Magy lamented that it would be the last time a shofar would be blown in Cairo.

Worrying about the security environment, the Yom Kippur service was moved to a small, rarely used synagogue in Cairo’s southern suburbs, hidden from view by a wall and gate. For a group of 12 — mostly expats — I read the Torah portion and sang a few songs, and focused on the teachings of another Egyptian Jew, Saadia Gaon, who described the shofar as a “call to duty” for repentance. The fact that a Rosh Hashanah and Yom Kippur service occurred in Cairo at all was foremost on our minds.

Magy and Nadia understood the limitations of post-Muslim Brotherhood Egypt. A government-imposed curfew kept people home at night. The “ladies” did not want to go outside. Visitors to Egypt were few. Magy and Nadia did what they could, and focused on inventorying the assets of the community to ensure that its heritage would be preserved.

Their efforts, and their place as my adoptive family, made the telephone call of March 6, 2014, that much more painful:

“Is everything okay, Magy?”

“Nadia just died. She had a heart attack.”

She didn’t have to ask the next question. I rushed home to get the chevra kadisha manual and returned to the Italian hospital. This time the courtyard was full of children, relatives and friends. It is said that no close relative is supposed to prepare a Jewish body for burial, but Magy and two of her childhood friends were adamant in ensuring that Nadia was treated with the utmost respect. I guided the three friends, who had known each other for 40 years — a Jew, a Christian and a Muslim — through the rites. No tears were shed during the rituals. But when I brought the three together after we had finished for a final prayer, that’s when all our eyes welled up with tears.

Nadia’s death was a serious blow on so many different levels. She was only 57. Her mother, Marcelle, was still alive. The funeral, conducted in a mixture of Arabic, French and Hebrew, was full of the cries of Egyptians who saw a friend and family member go too soon. The evening after the burial, hundreds of people filled the Adly Street synagogue courtyard. Over Arabic coffee and tea, a sheikh from al-Azhar, Egypt’s premier center of Islamic learning, paid his respects and spoke to the unity of all Egyptians, irrespective of religion.

Seth Wikas worked at the U.S. Embassy in Cairo from 2012 to 2014. The views expressed in this article are strictly his own and do not reflect those of his employer.

Blowing the Shofar in Cairo