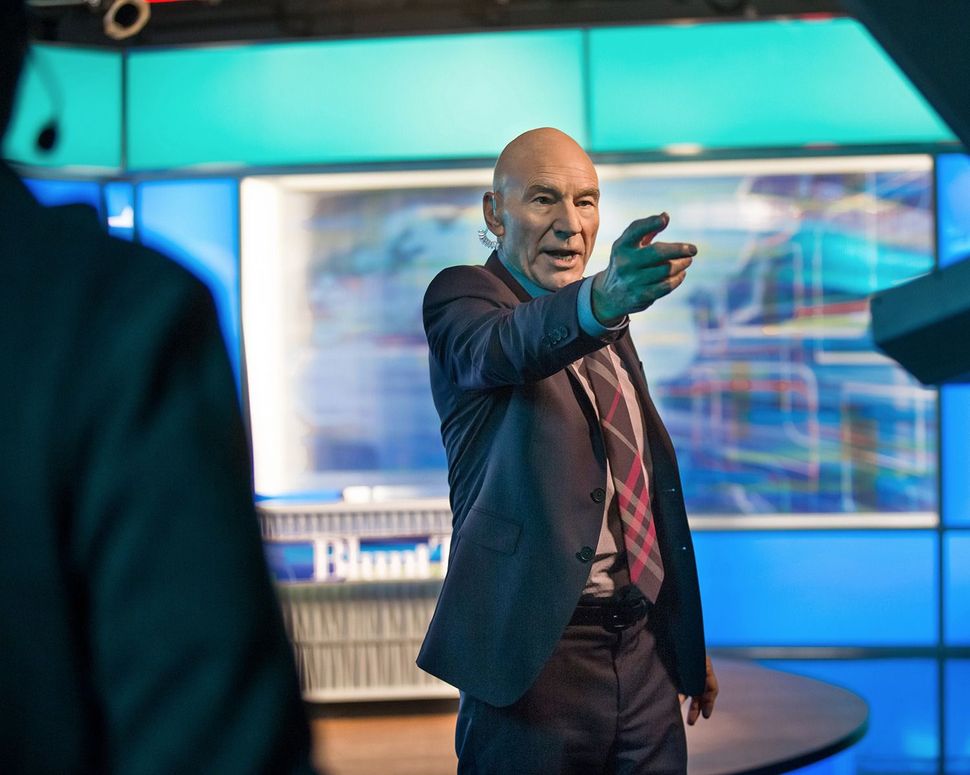 I don’t know if “Blunt Talk,” the new comedy on Starz starring Patrick Stewart as a disaster-prone news anchor, is any good. But I do know that I like it. The show is strange and manic, and has a lot of witty lines about the Falklands War. It also has weak dialogue and contrived plot points and a whole list of other items you could put in a tidy pros verses cons chart. But the thing I like about the show — and something that doesn’t seem calculated to be part of its charm — is that it’s all about Jonathan Ames.

Ames is a novelist, personal essayist and, most recently, a TV writer and show runner. His last show, “Bored to Death,” starred Jonathan Schwartzman, Zach Galifianakis and Ted Danson and ran on HBO from 2009 to 2011. Like his writing, which was always somewhat autobiographical even when it took fictional form, “Bored to Death” was a kind of veiled memoir. It took place in Ames’s home borough of Brooklyn and centered on a struggling writer named Jonathan Ames (played by Schwartzman), who had taken to moonlighting as an amateur detective on Craigslist. He was joined on his capers by his buddy Ray (Galifianakis), a babyish comic book artist, and by George Christopher (Danson), a white-haired magazine editor who liked nothing better than to get stoned and hang out with young people.

“Blunt Talk” — which is co-produced by Seth MacFarlane of “Family Guy” notoriety — is further removed from the usual settings of Ames’s life. It takes place in Los Angeles, not New York, and it stars Stewart as Walter Blunt, a celebrity newscaster going through a running series of personal and professional crises. At the beginning of the first episode we see him leave a bar wastey-pants drunk and get into his car, where he eats half of a pot-laced chocolate bar while rapping along to The High Decibels. (“Miss Cindy! She a sexy little thing! Miss Cindy!”) On his way home he picks up Gisele (Trace Lysette), a transgender prostitute whose breast he would very much like to suckle.

Of course he and Gisele get caught by the police, and Walter winds up quoting Hamlet and yelling about the Falklands from the top of his Jaguar (“My land! My sea!”), a night in the drunk tank, front-page tabloid news and a belated resolution to turn over a new leaf. His best idea for personal and professional redemption — once it’s determined that he can’t “get Oprah to make all this go away” — is to conduct a split-screen self-interrogation on his show that evening. This works just fine, until he collapses on camera because of a cocktail of drugs taken earlier, supplied partly by his psychoanalyst (Richard Lewis) and partly by his self-medicating senior producer, Jim Stone (Timm Sharpe).

In other words, it’s a far cry from the life of a Brooklyn novelist, one would imagine. But already, within the first half-hour of “Blunt Talk,” we have a full range of themes familiar from Ames’s essays and fiction. These include drinking and alcoholism, drug use (especially of cocaine) and an obsession with transgender prostitutes. As the show goes on, these recurrences accumulate. Blunt has a valet named Harry (Adrian Scarborough), who fought under him in the Falklands and with whom he enjoys the kind of Jeeves-and-Wooster relationship previously exploited by Ames in his 2004 novel, “Wake Up, Sir!” After Walter’s run-in with the law he does penance by getting Harry to beat him with a towel in the shvitz while screaming: “You’ve been unclean, major! Very unclean!” When Walter tries to get Harry to perform in a porn film in exchange for the use of his neighbor’s home studio (it’s a long story), he tells the reluctant valet: “Remember the Falklands! Do it for the lads!”

Troubled fatherhood — another of Ames’s favorite themes — arises with the introduction of Blunt’s young son, who, in another nod to P.G. Wodehouse, is named Bertie. “Having never met my own father, I need to be a better father to the American people — and to my own children, of course,” Blunt says at one point, without irony. When the musician Moby shows up as Bertie’s music teacher and the new flame of Walter’s ex-wife, Blunt whispers, still a little drunk and not quite sotto voce, “Do you think he named himself?”

So far, most of the media attention surrounding the show has focused on Stewart, and rightly so. The famed thespian and “Star Trek” captain takes on a rare comic role here and pulls it off with aplomb. But the show is really an ensemble affair, and screen time is split between Walter Blunt’s personal entanglements and those of his staff. To his credit, Ames’s peculiar sensibility isn’t limited to a single stand-in figure. Instead, almost every character on the show seems to have a bit of Ames in them. In the third episode, we see what each member of the staff gets up to on a Friday night. Invariably, they all become involved in some kind of off-beat sexual encounter before winding up sad and alone.

Does all this zaniness make “Blunt Talk” a good show? My judgment is clouded, but I suspect it doesn’t. There are a lot of funny lines, but also a lot of really stupid bits. In an extended slapstick sequence from the second episode we see Blunt miss a flight because of repeated mishaps with the overzealous automatic flush on the airport toilet. “I’ve been betrayed by the FAA and modern bathroom technology,” he laments. When his ex-wife tells him he should video chat more with his son, he protests that “I don’t know how to FaceTime, I’m on AOL.” Old people are bad at technology, I guess. Haw, haw.

My suspicion is that the show won’t survive such flaws. But I’m enjoying it anyway, while it lasts, mostly because I like stretching out on the crooked mental furniture that decorates Ames’s mind. Most of his predilections I don’t personally share, but the appeal has very little to do with identification. It’s that genuine idiosyncrasy is hard to come by these days, and Ames has it in spades. With him it seems less like some kind of ginned-up “personal brand” and more like forced exhibitionism, an exercise in mining the weirdness of his own character for artistic material. And if he’s now managed to get Patrick Stewart to enact it all onscreen? It’s a dream come true, and just as bizarre.

Ezra Glinter is the deputy culture editor of the Forward. Contact him at [email protected] or on Twitter, @EzraG.