An Unexpected Yom Kippur in Bangkok 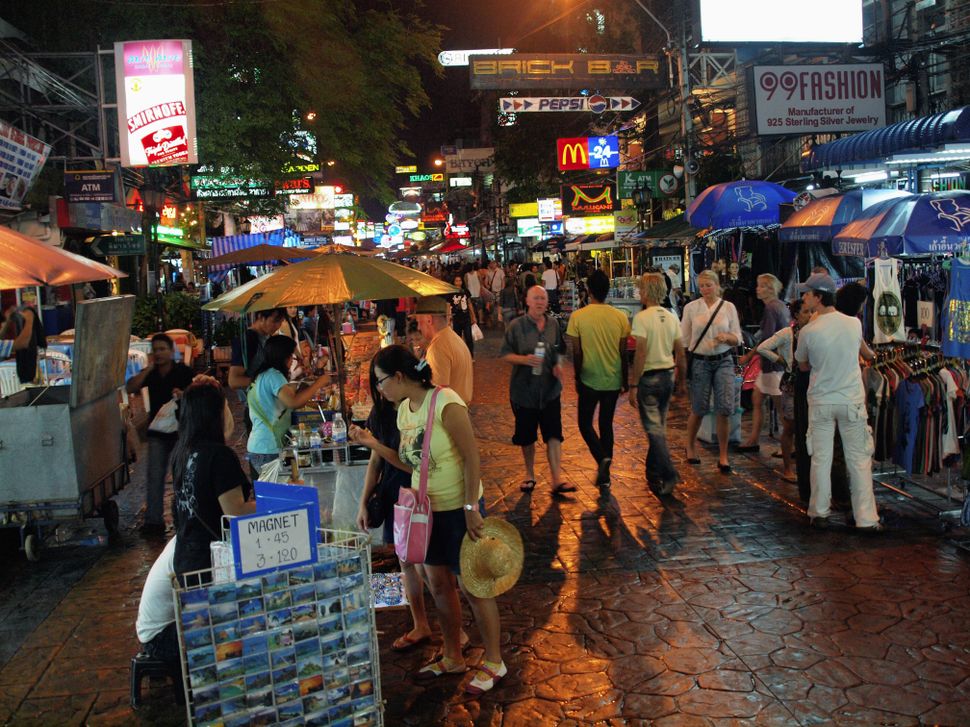 I was the only American in the room and definitely the most clueless. Standing at the back of the makeshift shul for Yom Kippur services in Chabad of Bangkok, I attempted to follow along in my Hebrew siddur pamphlet, observing other people in the room and trying to peep through the mechitza just to know what the heck was going on. Although I was well aware that taking a semester abroad in Thailand meant that my Jewishness would take a momentary backseat, I had cringed with good-old-fashioned Jewish guilt at the thought of snubbing Yom Kippur. No matter how far from home I was, it didn’t feel right.

So, having decided to fast and skip class, I set out unaccompanied to observe the Jewish Day of Atonement at the local Chabad. I took the sticky, sweaty 20 minute walk up to Khao San Road for, well, I didn’t really know what for. I showed up late and after a friendly reprimanding by the Israeli security guards for my tardiness, I found my way upstairs.

The Chabad of Bangkok’s location is pretty ridiculous, like many things in Thailand. It sits smack in the middle of Khao San Road, which is the beating heart of Bangkok backpackers. Don’t visit if you’re claustrophobic; the streets are buzzing with motorbikes, heavily drinking travelers, people offering you scorpion snacks, and street vendors selling everything from Papaya shakes to pork balls. Just down the street is a restaurant called “Shoshana” where Thai waitresses who speak much better Hebrew than I do dish up hot pita and schwarma. The word “Chabad” appears on a two-story building squeezed between a hefty restaurant donning a massive aqua blue Buddha in the back and a 7-11. It welcomes you with an intimidating guard post in front and a more inviting Kosher Israeli restaurant on the bottom, serving overpriced schnitzel and hummus. From what I perceived, the place attracts everyone from wandering Jews and expat Israelis to international students that come for WiFi and a quick breather from fiery Thai food.

On that hot Yom Kippur day I was welcomed in Hebrew, to which I responded blunderingly and soon had to pathetically admit I was American. Yes, an American Jew. Yes, I’m studying in Bangkok. Walking in, I was astonished to see the place overflowing with Jews. Would you have been stunned to find a good 50-plus adults and small children in a makeshift Chabad synagogue in Bangkok, Thailand on Yom Kippur? I sat next to a Russian high schooler participating in an exchange program with a host family living in small village in Northern Thailand to my left, and a beautiful, dread-locked Israeli woman dressed in all hemp who had spent the past two years volunteering and traveling in India on my right.

Though I lack experience with Chabad style Judaism, and had nothing but Jewishness in common with anyone else present, the whole event felt unexpectedly natural. The day felt meaningful and in preparation for studying in Jerusalem during the spring semester, I took plenty of time to speak Hebrew with the 20 Chabad kids running around. You have to wonder, what other kind of diverse, vibrant Jewish communities exist in hubs all over the world?

What I thought would be a break from anything remotely Jewish turned into a fresh peek into Jewish life abroad and an unanticipated puncture in my own small bubble of Judaism. Though Yom Kippur services at the Hillel of UC Santa Barbara are terrific, being somewhere else renewed my sense of belonging to a culture and people that extends across all seas — and altogether relieved that Jewish guilt.

An Unexpected Yom Kippur in Bangkok