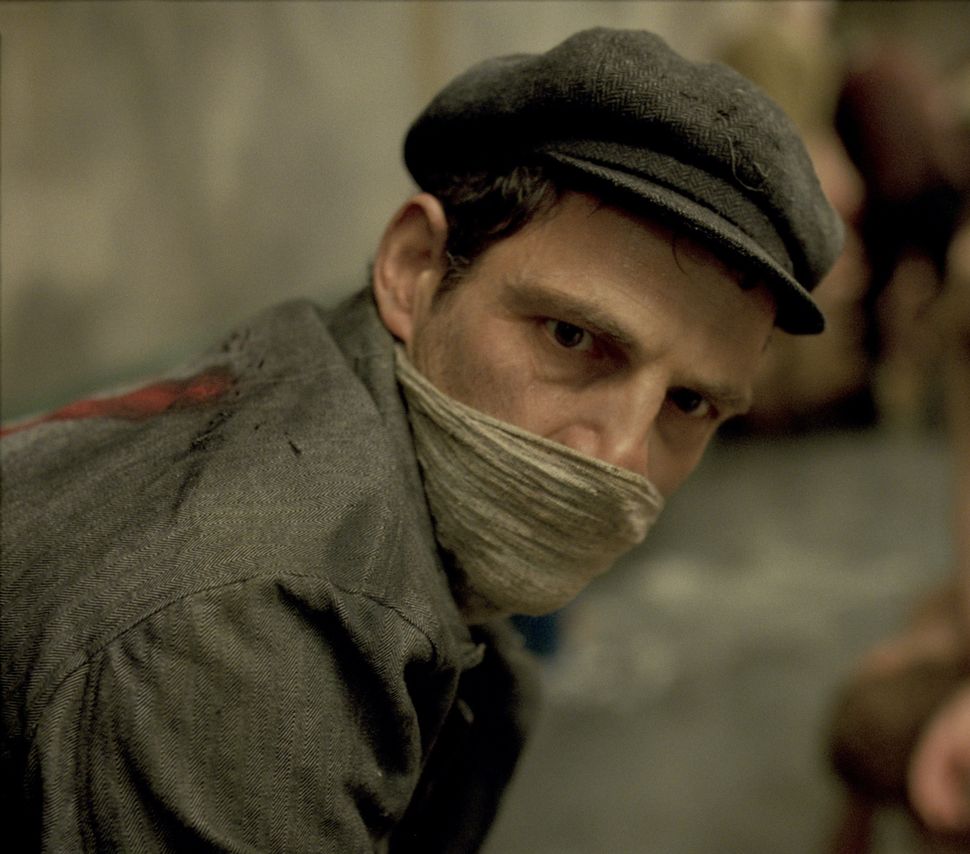 The most iconic face of this year’s Cannes Film Festival did not belong to Emma Stone or to Cate Blanchett, — to mention two celebrities who walked the red carpet — nor to Ingrid Bergman, whose silver image graced the festival’s banners and posters; it was the sunken, haunted face of Geza Röhrig the 48-year-old star of one of the festival’s most acclaimed films, the Hungarian Holocaust drama “Son of Saul,” which is receiving its American premiere at the New York Film Festival on October 5.

On the Croisette, Röhrig, a poet with little prior acting experience, was glimpsed in two separate guises: As he appeared in the film, with gray, sickly skin pulled tight over wan cheeks, with haunted eyes and a cold sore (one critic compared his look to that of a pterodactyl), or walking the red carpet with a rabbinical beard, wearing a barely visible black-velvet yarmulke floating above his full mane of wavy black hair.

(In the interest of disclosure: Röhrig used to go to my synagogue in New York, and I tagged along with him during my time in Cannes.)

Rock music usually blares out deafeningly during the marches; but this time around, the film team, led by Röhrig and by director Laszlo Nemes made their way up the stairs to the Grand Theatre Lumiere to the strains of “Erbarme Dich,” one of Bach’s most searing melodies. The melancholy aria set the tone for the film to come.

There is no music in “Son of Saul,” a cinematic nightmare set in Auschwitz-Birkenau over the course of 36 hours in October 1944. Saul Auslander is a member of the Sonderkommando, the unit of Jews forced by the Nazis to herd new arrivals into the gas chambers, sort out their possessions, remove the corpses for incineration and scrub down the gas chambers for the next round of killings. In the film, the entire mechanism of mass exterminations is both seen and not seen. The powerfully subjective camera, zoomed in tight with a shallow depth of field (the brilliant cinematographer is Mátyás Erdély), rarely leaves Röhrig’s face or the back of his head; the pell-mell scrambling of prisoners and the endless stacks of naked corpses are often visible as only blurry background detail, or fleetingly in focus out of the corner of the frame. This is the film’s most important visual decision: the refusal to ever let you see “the big picture” (something that Holocaust films often try — and fail — to do). It also creates an almost physical sense of claustrophobia, which is heightened by the narrow aspect ratio and a grainy film stock.

The film opens in medias res, establishing Auslander’s character economically during a near-wordless sequence of a routine extermination. The minute the gas chamber doors close, Auslander rushes over to the coats and begins removing them from the hooks with stony determination. Soon the screaming starts, along with the pounding and the scratching (the film’s remarkable sound design is one of its most effective aspects). Auslander continues with his task, indifferent to the shrieks. Once the screams have subsided, he will remove the corpses with similar unthinking passivity. Numbed to the vast spectacle of suffering and death around him, he has practically entered into the world of shades himself.

When it comes to cinematic representations of the Holocaust, artists struggle to find a suitable narrative and point of view. The vast evil of the Shoah seems to elude most attempts at storytelling. Can it be possible to distill its essence into a single plot? Steven Spielberg’s solution in “Schindler’s List “was to find a character that seemed to stand at the center of it all, someone to whom the epic sweep of the Holocaust could constantly return. Polanski took a somewhat inverted approach, approaching the Warsaw Ghetto uprising and liquidation via a character who spends most of the film running or in hiding. There have been plenty of other powerful films about the Holocaust, mostly delving into survivors’ psychologies, such as “The Pawnbroker,” “Sophie’s Choice” and “Fateless” (based on the autobiographical novel by Imre Kertesz).

Nemes and the co-screenwriter Clara Royer have devised a simple plot that provides a road map to the hell of Auschwitz without distracting the viewer with superfluous detail. While cleaning out the gas chamber, Auslander stumbles on a corpse he believes is his son. The identity of the boy is left in doubt, but Auslander becomes obsessed with saving his body from the flames of the crematorium and finding a rabbi to recite Kaddish and give the boy a proper burial.

“I owe a longer allegiance to the dead than to the living; in that world I shall abide forever,” cries Sophocles’s “Antigone,” banned by Creone from burying her brother Polynices. There is something classical and pure about Auslander.’s quest. It requires no explanation, and the film never stops to provide one. Auslander pursues this goal with single-minded determination, putting the rest of his Sonderkommando unit in jeopardy by giving his mission priority over a planned rebellion.

“Saul” is effectively free of psychology. Somewhat unexpectedly, this helps make the film so immediate and powerful. Auslander is the living dead, unexpectedly jolted back to life by something that reminds him of a long-forgotten sense of dignity. Auslander’s expressive face is often indeterminate. He is both a tabula rasa and a cipher onto which the viewer is invited to project any number of thoughts, feelings and motivations.

Equally important is the film’s stripped-down narrative style. Characters talk, whisper and scream at each other, but there is little in the way of conventional dialogue. For the most part, “Saul” is pure visual storytelling. I say “for the most part” because one of the film’s most impressive qualities is how it evokes the camp’s babble of languages. Yiddish, Hungarian, Russian, German and Polish are heard over the roar of furnaces, artillery and other menacing sounds. (The only other film I know of about the Sonderkommando, Tim Blake Nelson’s “The Grey Zone” from 2001, was a failure, partially because everyone spoke English with silly foreign accents).

The lack of psychological and narrative explanation throws the viewer into the horror of the camps unlike any other film I have ever seen. Nemes seems to have internalized Primo Levi’s famous anecdote from “Se Questo è un Uomo,” spoken by a Nazi guard at Auschwitz: “Hier ist kein warum” — “Here there is no why.” The only other film that rivals “Saul” in its raw and unsparing power is Elem Klimov’s 1985 “Come and See,” about a young partisan in Belarus. Not surprisingly, Nemes cited that film (which is opposed to “Saul” on a stylistic level) as a major inspiration.

“Saul” was also the only directorial debut featured in this year’s competition lineup at Cannes. One of the few films that had anything approaching critical consensus, it was seen widely as the film to beat for the Palme d’Or. It ended up snagging the Grand Prix, effectively the silver medal, and also took the FIPRESCI award from the International Federation of Film Critics.

Two weeks after winning the Grand Prix, Nemes was in Budapest for the film’s Hungarian premiere. The film opened at a time when the far right and anti-Semitic Jobbik party — the third largest in the Hungarian Parliament — enjoys increased popularity and makes political inroads. At the press conference, Nemes read a message from the film’s historical consultant, Zoltan Vagi, reminding the audience that Hungary [set a European ??]sent 430,000 Jews to Auschwitz-Birkenau within eight weeks in 1944, including more than 100,000 children. Vagi wrote that Hungary had a lot for which to atone.

The filmmakers found themselves again responding to criticism of an overly sympathetic portrayal of the Sonderkommando, a topic that first came up during Cannes, when a journalist from Belgian television suggested that those in the Sonderkommando were “half-victim, half-hangman.”

At that time Röhrig, sporting a white shirt and blue worker’s cap, took relish in shooting the journalist down. “I couldn’t be passionate in the movie. I’m going to be a bit passionate now,” he began. “There has to be a clarification, sir. The Sonderkommando is 100% victim. The Sonderkommando has not spilled blood. The Sonderkommando wasn’t involved in any sort of killing,” he said, practically shaking with anger. “They were inducted on arrival under the threat of death,” he continued. While explaining that the Sonderkommando were especially hated by other prisoners (Primo Levi called them “akin to collaborators”) and have been frequently seen as killers, Röhrig said that in 2015, the time has come to reverse that appraisal. “They had no control of their destinies,” he said.