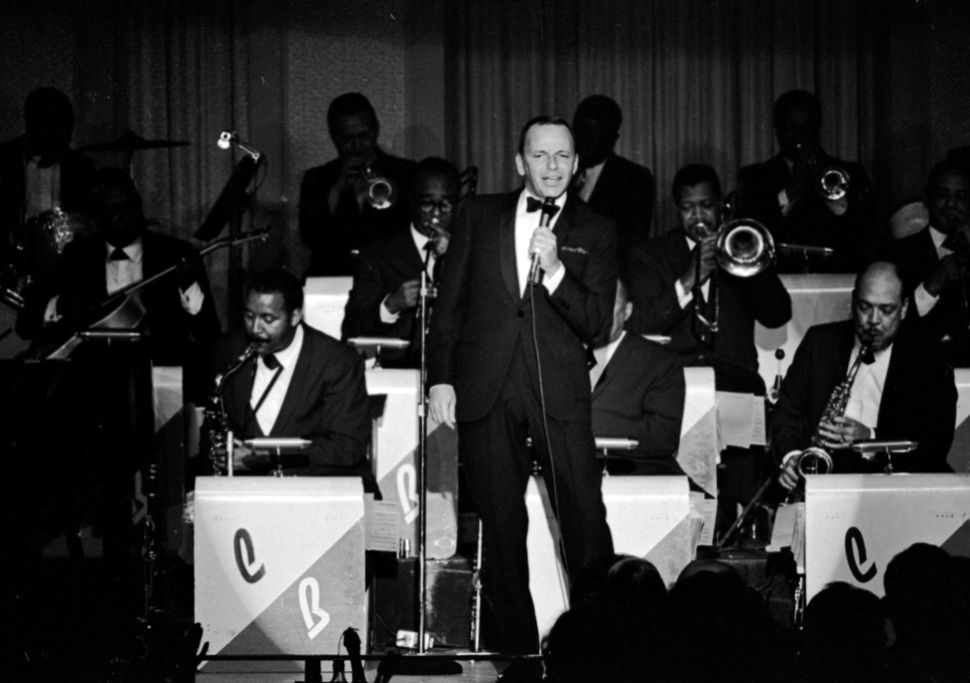 “Sinatra’s Century: One Hundred Notes on the Man and His World,” by the American Jewish poet and anthologist David Lehman, will appear in time for the centenary of Ol’ Blue Eyes, on December 12. The icon who belted out “Come Fly With Me,” “The Lady Is a Tramp,” “My Kind of Town,” and “New York, New York” is also known for his closeness to the State of Israel and the Jewish people. Lehman does not gloss over some of the rougher sides of the Sinatra life and legacy. Recently, The Forward’s Benjamin Ivry spoke with Lehman about Francis Albert and all that jazz.

Benjamin Ivry: What are the origins of Sinatra’s lifelong affection for the Jews and Israel?

David Lehman: I know that when Sinatra talks about his childhood in Hoboken, [New Jersey], he refers to the Jewish population with a certain affinity. Apparently, the Italians and the Jews got along well and lived in close proximity. The Irish population seemed to occupy a different zone of the city. Sinatra had a natural sympathy for other minority groups, a real concern for the plight of African Americans.

Sinatra visited and raised funds for the State of Israel repeatedly, to the point where his music is still banned in Lebanon for “Zionist tendencies.” In the 1966 film “Cast a Giant Shadow,” about Col. Mickey Marcus, an American officer of the Israel Defense Forces during the 1948 Arab-Israeli War, Sinatra played an American pilot who goes on a suicide mission to bomb Arab troops. Yet the real-life Marcus, a graduate of Brooklyn Law School, served as the assistant United States attorney in New York in the 1930s, prosecuting Sinatra’s friend, the gangster Lucky Luciano. Did lionizing Marcus pose an ethical dilemma for Sinatra?

I sincerely doubt that Sinatra would know the history of what Mickey Marcus did in the 1930s. It’s true that Sinatra idolized the wise guys and saw them in a certain way, but that didn’t mean he was a historian of the people in the mob. Sinatra was much too self-absorbed and busy making movies and concerts to know who did what to whom in mob history. He was especially eager to do this film, because he believed Zionism was a righteous cause.

The memoirs of Jerusalem’s mayor, Teddy Kollek, explain that in New York in the 1940s, Sinatra carried $1 million illegally to pay for weapons destined for Jewish forces in the 1948 Arab-Israeli War. The 2005 biography “Sinatra: The Life” states that Sinatra smuggled money for the mafia, too. Does this shared allegiance matter?

I think it substantiates the view of Sinatra as a maverick and individualist, someone who was going to do what he felt like doing, regardless of propriety and the cost to him in negative headlines. Sinatra trusted his instincts. He could be an extremely generous man and at the same time petty and vindictive. He was an extraordinarily complex man. He could have the most extreme temper tantrums, but also make huge donations to hospitals.

At a certain point, Sinatra’s reputation for power and control and alleged mob connections was such that it was a standard repertoire item for a comedian like Shecky Greene or Don Rickles to make a jest at Sinatra’s expense that he was a godfather with hitmen at his disposal. He did have bodyguards, in part because he was allergic to being alone. As a young man without bodyguards or police protection, he might have been torn apart by adoring fans.

Can admirers of Sinatra’s voice be put off by the swaggering macho arrogance of “A-number-one, top of the list, king of the hill” from his hit “New York, New York”? “A Rabbinic Anthology” quotes the Talmud: “God declares, ‘The proud man and I cannot live in the world together.’”

Of course there are many people who to this day dislike Sinatra for that very reason. It must be noted that this is a trait of New York City, which also arouses the interest and fascination of the rest of the country as well as, to some extent, the dislike. Swaggering through this song evokes the spirit of New York, and it is no accident that the New York Yankees adopted this recording as their theme song. For some years they played Sinatra’s version after a victory and Liza Minnelli’s recording after a defeat, but Liza objected, so they decided to change to Sinatra’s version all the time. But Sinatra also sang songs of vulnerability.

Your own poetry, inspired by Sinatra, has already appeared in the 2008 anthology “Sinatra: …. but buddy, I’m a kind of poem” along with something by Allen Ginsberg. Those are two disparate characters. What could Ginsberg have to say about Sinatra?

It’s fascinating to me that Sinatra would be a friend of [the publisher] Bennett Cerf. What could those two have in common? But Sinatra did admire brilliance and professionalism wherever he encountered it, and he was free with compliments and advice.

You allude to the fact that Sinatra called Jerry Lewis “The Jew” and that when he met Don Rickles, he would “signify his enthusiasm by exclaiming jovially, ‘You fat Jew.’”

Back in pre-political correctness days, [Sinatra] had nicknames for all his friends in the Rat Pack, to show how indifferent they were to social expectations. They could joke about race because they were defying racial expectations.

In his 2013 memoir, “My Way” the singer Paul Anka claimed that Sinatra wanted to put out a hit on Kitty Kelley, whose 1986 biography, “His Way,” claims: “On one occasion at an after-hours party… Sinatra, drunk and morose, threw a woman through a plate-glass window and nearly severed her arm.”

When Sinatra got drunk and out of control, he was capable of behaving very, very badly, but you know my book is not a brief for the defense in the trial of Frank Sinatra, but about a singer who I believe is the greatest entertainer in American history, who also embodied the century in a certain way. He was a Roosevelt Democrat and became a Reagan Republican. He had an interesting career as an actor, and wields an influence largely for the good. That doesn’t mean I’m going to defend him for punching somebody.

Reviewing the Kelley biography, Barbara Grizzuti Harrison wrote of her admiration for Sinatra’s singing, adding: “How can this man hang out with mobsters, have his bodyguards beat up hapless fans and discarded women…? The facts break my heart.”

We have to put things in a certain perspective. I don’t think Sinatra’s artistry as a singer or actor is contaminated by the excesses of his personality. Edgar Degas was a terrible anti-Semite, but you don’t see his anti-Semitism in his paintings of bathers and horses and dancers.

The 1945 short film “The House I Live In” shows Sinatra defending a Jewish-looking boy bullied by schoolmates, saying that only a “Nazi or somebody as stupid” cares about religious differences. Do you find this film convincing today?

I find the singing of the song to that group of little kids to be incredibly moving. You can’t imagine Dean Martin singing “The House I Live In,” with his comic manner and natural ironic sense. When Sinatra sings “The House I Live in,” he means it — he loves America. I find it incredibly moving. It was released at a time when a statement in favor of tolerance meant something important in the United States. Sinatra made that film with Jewish colleagues who were very left-wing and later blacklisted, at a time of America Firsters and Father Coughlin and Charles Lindbergh.

In “Sinatra’s Century” you write, “I happen to like Sinatra’s performance as Nathan Detroit” in the film “Guys and Dolls.” Yet this role, as conceived by Abe Burrows (born Abram Borowitz) and Frank Loesser and premiered by Sam Levene, was intended to be Jewish.

Sinatra never looks or sounds more Jewish than in his role in this movie, when he sings in “Sue Me”: “All right, already, I’m just a no-goodnick! All right, already, it’s true. So nu?” In a Sammy Cahn song, “Come Blow Your Horn,” he sings “I’ll give you the whole megillah.” I always enjoy it when you come across a Yiddish word in a song.