Jews Go Back to the Land (Again) 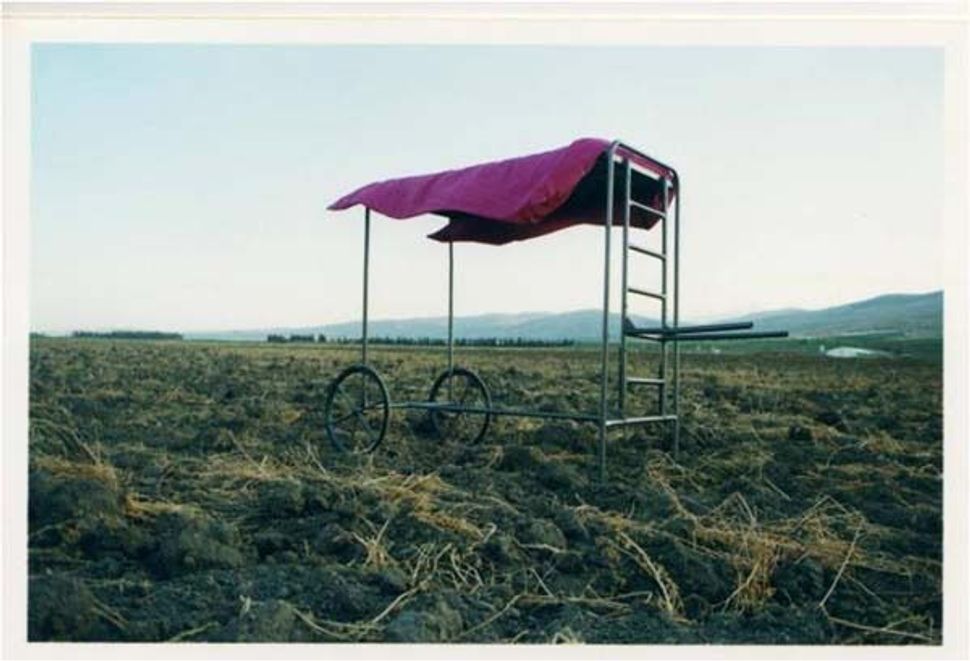 Eco-Judaism is in full swing these days. You don’t have to go too far afield to find a lively array of Jewish institutions that tout the virtues of both farm-fresh produce and the farming life. From marking Sukkot by heading to the nearest orchard for an afternoon of apple-picking to mounting art exhibitions on shmita, the biblical practice of letting the earth rest – “Fields of Dreams: Living Shmita in the Modern World” at the Yeshiva University Museum is a lively case in point – contemporary American Jews have gone, well, whole hog, in their embrace of environmentalism.

Perhaps the last time the American Jewish community so vigorously threw its collective weight behind agricultural expression was in the early 1900s, when, in quick succession, the newly established Jewish Agricultural and Industrial Aid Society, headquartered on Second Avenue in downtown Manhattan, first encouraged recently arrived Jewish immigrants to take to the soil, the Federation of Jewish Farmers was born and agricultural fairs, timed to coincide with Sukkot, were mounted on the roof of The Educational Alliance, that “clearing house (sic) of Jewish immigrants.”

True, most early-20th-century Jews had little truck with farming and “dairying.” When it came to growing vegetables and milking cows, they were novices or “tenderfeet.” Unlike their non-Jewish counterparts, whose knowledge of the soil and of the animal kingdom was said to be “hereditary and instinctive,” Jewish farmers were apt to blunder and stumble. But the Jewish Agricultural and Industrial Aid Society (or the Jewish Agricultural Society, as it was later known before disbanding in 1972) was there to catch, and sustain, Jewish agriculturalists wherever they called home: Southern New Jersey, New York’s Sullivan and Ulster counties, California and Connecticut, North Dakota and Wisconsin. Providing loans or what it liked to call “pecuniary assistance,” proffering advice on what kind of seeds to plant and what kind of machinery to purchase, as well as offering classes on the principles of sound farming, it hoped to build a “permanent farming population from out of the class of Jewish immigrants.”

After all, they had what it took to be a success. Those qualities that had stood the Jews in good stead over the centuries — “moral stamina,” or grit, “temperate habits,” an “intense love of family” — would enable Jewish farmers to bear up under the most trying of circumstances, the leaders of the society affirmed. More to the point, aspiring Jewish farmers, they proudly noted, did not regard farming as merely an economic opportunity. “To the Jews, to whom agriculture was for centuries a prohibited occupation and the memory of a glorious past, the deed to a farm is equivalent to a ‘Bill of Rights.’” Or, as another champion of Jewish farming evocatively put it, working the land was a “visual and tangible sign of religious liberty and political emancipation.”

Nurtured by such ringing endorsements, little, it seemed, stood in the way of the Jewish farmer’s success — except, perhaps, the farmer’s wife. Contemporary observers were quick to point out that she was likely to be the biggest stumbling block to her family’s relocation from city to farm, especially if she “cared for company and liked to gossip.”

In an attempt to overcome domestic discord and, concomitantly, to develop a sense of community, Jewish farmers banded together in 1908 to form the Federation of Jewish Farmers, a national organization whose members would gather together annually. Under its aegis, the organization also published an illustrated magazine in Yiddish and English, Der Idisher Farmer (The Jewish Farmer), whose articles on such themes as the “Ten Commandments for Prospective Farmers” were widely publicized both within and without the Jewish community. “Its good sense and applicability not alone to would-be Jewish farmers but to all would-be farmers” was a source of particular pride.

The Federation’s agricultural fairs were of even greater moment. Scheduled during Sukkot, they were held on the roof garden of The Educational Alliance, where, in contrast to the noisy, dirty streets below, a “county fair blossomed” up above. Featuring more than 200 exhibitors, as well as demonstrations in bee-keeping and butter churning, its very first venture, in the fall of 1909, drew 50,000 visitors, who crowded the stalls for a look-see and perhaps even a taste. The fair also occasioned much commentary, especially on the part of non-Jewish agricultural experts who, to a man, commended the corn and the yams and most especially the potatoes, which took first prize.

But then, everything on display — the fruits and vegetables, the butter and cheese, the pastries and the preserves — was well received. The “specimens, as put forward, were certainly first rate and attractive,” one visitor commented. Another, drawing on the same descriptive phrase, added that the fair’s offerings furnished a striking alternative to what most residents of Manhattan’s Lower East Side knew as only the “decayed specimens of undoubted antiquity offered for sale on neighborhood carts.”

Still, to some observers, perhaps the most heartening specimen of all was not the produce but those who grew it: Jewish farmers and their families. Where their urban coreligionists were wan and anemic-looking, bent and fretful, the men who tilled the soil, it was pointed out, were broad-shouldered, tanned and athletic, their offspring rosy-cheeked and content. No better advertisement for the virtues of the farming life could be had than that, prompting “Survey,” an influential, progressive journal of the time, to characterize the agricultural enterprises run by American Jews as “farms of wonder.”

Jews Go Back to the Land (Again)