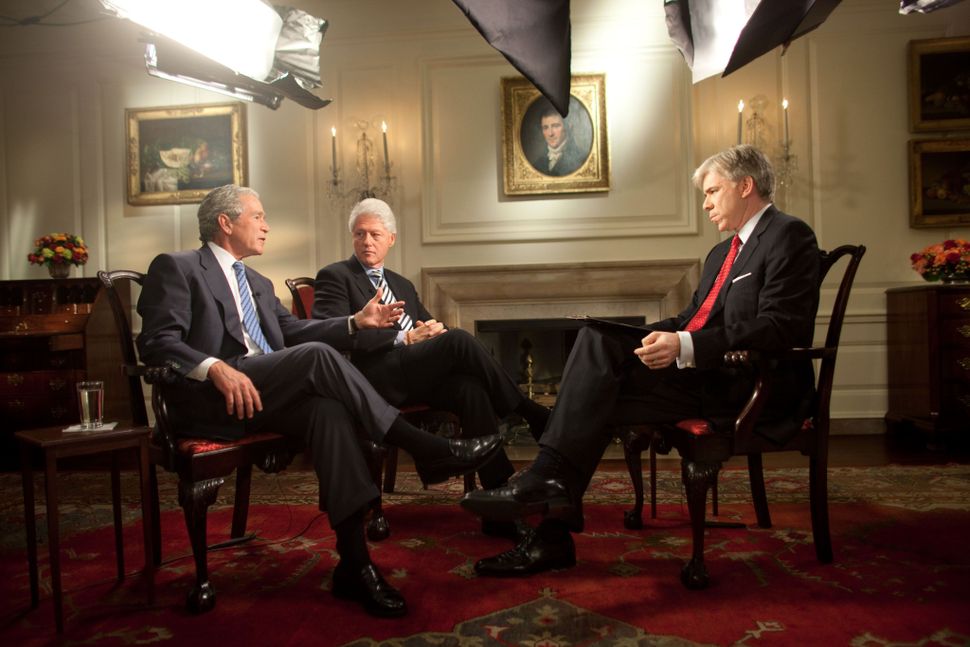 ‘I don’t get this right all the time. Faith is hard. I do still get angry and hurt by it. But I aspire to do better. I’m not going to allow myself to be consumed by disappointment by how I left. This is a rough business.”

The speaker is David Gregory, former moderator of “Meet the Press” (accent there on the word “former”) and author of “How’s Your Faith?” a memoir, about Gregory’s life, his family and his search for meaning: It’s a struggle that began in his troubled childhood and continues today as he deals with losing one of the premier jobs in television journalism.

Gregory, 45, grew up in Los Angeles. His father, Don Gregory (né Ginsberg), was Jewish; his mother, Carolyn Gregory, was a lapsed Catholic. Her first pregnancy ended in a stillbirth, but the Catholic hospital where the infant was delivered insisted she name, baptize and bury the body in a religious ceremony.

“Mom blamed the Church for worsening an already traumatic time for her and she never forgot it,” Gregory writes.

Nevertheless, when Gregory’s elder sister, Stephanie, was born, she was baptized while he was raised Jewish. “My parents were going down this road of basically dividing us,” Gregory told the Forward.

As it turned out, questions of religious identity were only one of the family’s problems. Gregory’s mother’s alcoholism was another. Gregory remembers riding in a car with his mother driving, and grabbing the steering wheel to avoid an accident. He reports that his mother was later handcuffed and arrested for DUI.

“As a kid as young as 11, my spiritual longing began,” Gregory writes. “I didn’t have anyone I felt comfortable going to. My sister and I were very close and there for each other, but she couldn’t help me rise above the situation…. Growing up as I did with an alcoholic mother, I think I felt alone and confused. There is something about the family of an alcoholic, where everybody plays a role. My role was to retreat.”

Gregory went to Hebrew school, was a bar mitzvah, graduated from American University and began a rapid ascent up the television news ladder. In 1997, when he was a Midwest-based correspondent for NBC News, he was one of four reporters assigned to cover the trial of Oklahoma City bomber Timothy McVeigh. While on assignment he met Beth Wilkinson, a rising star in the Justice Department who was one of the lead prosecutors on the case — and who would later become his wife.

Wilkinson was raised in a close-knit, church-going Protestant family, and as her relationship with Gregory progressed, the subject of family and children came up. Did Gregory consider raising his children in Wilkinson’s faith?

“I never considered it,” he said. “It was important to me that we be a Jewish family. As unique as my path was — the son of an interfaith couple whose father changed his name — I still had a very strong sense of Jewish identity, and it never occurred to me to do something else. She acquiesced very easily.”

Would it have been a deal breaker if she hadn’t? “That’s an interesting question,” Gregory said. “I was just head-over-heels in love with my wife, but it never occurred to me that we wouldn’t be a Jewish family. I appreciate the question about her. I think she’s thought about it and has some regrets about [her decision]. But she is still supportive, because she understands I needed to be on that path. So it is an enormous gift, an act of grace, and not because I deserved it. It was a gracious act on her part because she sacrificed so much.”

More than that, she set him on his quest. “I know what you are, but what do you believe?” she once asked him when the subject of religion came up. He is Jewish. He believes in God. But at the time, there was not much beyond that. So he began an informal course of study, holding regular meetings with Jewish teachers and rabbis, as well as with Christian ministers, in his search for spiritual well-being.

At home he introduced some Jewish traditions — a weekly Sabbath meal, for example. But it hasn’t always been easy. Wilkinson hasn’t converted, and Gregory says she sometimes feels excluded, even though they currently belong to a Reform synagogue. She has come to miss the warmth she experienced at Sunday church services.

His children, exposed to an alternative, have “bristled at some of their [Jewish] commitments,” Gregory said. “Although I must tell you my son Max, who is preparing for his bar mitzvah, really welcomes it now. I think my kids have a sense of Jewish identity and ideals that grounds them.”

But Gregory practices what one of his teachers calls “post-denominational” religion. The family has lobster in New England. Occasional visits to church for his wife’s sake. A Christmas tree. “I know people may be critical of that,” he said. But it’s a “Judaism that works for me.”

As NBC’s White House correspondent, Gregory had a contentious relationship with President George W. Bush. (Ironically, it was the president who provided Gregory with the book’s title. During a conversation at the White House, he asked Gregory, “How’s your faith?”)

Many colleagues considered him overly ambitious and a bit of a showboat, an image further enhanced when Gregory asked a question in French during a press conference with French President Jacques Chirac. And he was the subject of much jealousy and back-biting when, in 2008, he replaced the late Tim Russert on “Meet the Press.”

For the first three years or so, all went well. But then ratings began to fall. There were unsubstantiated rumors that NBC was getting a psychologist to help Gregory, none of which NBC officially denied. The atmosphere was poisonous, and it was only a matter of time before Gregory was dumped.

In retrospect, Gregory says he wishes he’d had a more collegial relationship with his peers, that he had been a person for whom his colleagues would have stood up.

“More than angry, I struggled with the question [asked by one of my teachers], ‘Who would you be if you weren’t in television news?’ It was a good job, and when that left me my faith didn’t always hold me” he said. “But being disappointed and going though a rough patch helps me reach for something deeper. I’m still a journalist. I’m still a husband and father. And that helps me.”

As for the future, there were reports that he’ll be covering the 2016 election campaign for Yahoo while continuing his goal “to become the best Jew I can be, to deepen my spiritual relationship with God and try to evolve as a human being.”