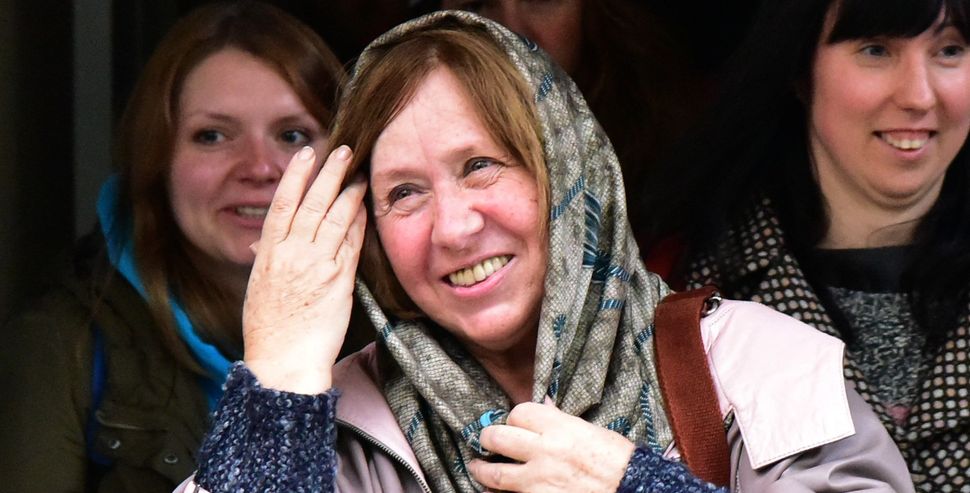 Svetlana Alexievich, who was awarded the Nobel Prize for Literature October 8, is a banned author in her homeland of Belarus, as she explained in a 2013 interview with Deutsche Welle, Germany’s international broadcaster.

Her books are neither published nor discussed in the media there. Due to government persecution, she left Belarus from 2000 to 2011, returning to be close to her remaining family and to hear her native language spoken. She admitted to Deutsche Welle that “as far as the dictatorship is concerned, it’s something we’re going to have for a long, long time.” This sober, if realistic assessment is particularly bad news for the remaining Jews of Belarus.

In 1995, Alexander Lukashenko, the president of Belarus, told Russian NTV television: “The history of Germany is a copy of the history of Belarus. Germany was raised from the ruins thanks to firm authority, and not everything connected with that well-known figure, Adolf Hitler, was bad. German order evolved over the centuries and under Hitler it attained its peak.”

In 2007, Lukashenko followed up this encomium of the well-known figure by blaming poor conditions in the city of Babruysk in eastern Belarus on its Jews. On government radio he declared: “This is a Jewish city, and the Jews are not concerned for the place they live in. They have turned Babruysk into a pigsty. Look at Israel – I was there and saw it myself … I call on Jews who have money to come back to Babruysk.”

Official edulcorations ensued, claiming that Lukashenko was merely joking, and that he is not really anti-Semitic. Yet this April, Lukashenko was once again at the charge, blaming Semyon Shapiro, a Jewish regional governor of Belarus, for not taking “all the Jews of Belarus under control” as the president had ordered a year before. Lukashenko was irked that a local online publication edited by Yuri Zisser, a Jewish journalist, had dared criticize his new tax law. This irritation inspired in the leader further jokes, mocking the governor Shapiro’s religious observance: “Shapiro prayed in the synagogue. There was rain only in Minsk region. Semyon Borisovich [Shapiro] is a good guy.” Conceding that Jews helped in the anti-Nazi resistance during World War II, Lukashenko added a further personal critique of Jews as “white boned,” refusing to do manual labor: “They don’t like to get their hands dirty or fight, but they did get their hands dirty with us!”

This repeated presidential obsession may seem peculiar in Belarus, where around 800,000 Jews—90% of the Jewish population—were murdered during the Holocaust, leaving only a tiny population estimated from about 13,000 to 20,000 in a country of 9.5 million people. But then, the phenomenon of anti-Semitism without Jews is historically well-established.

This is the nemesis of the new Nobel Prize-winner in Literature, the leader who made her exile from Belarus a compelling choice. Living under such a government, clearly discretion is advised. Yet Alexievich, born in 1948, has built journalistic and literary careers by being fearlessly outspoken.

When her prize was announced, she told Radio Free Europe that the “Belarusian government is pretending I do not exist. I am not published [in Belarus]. I can’t be quoted anywhere. At least I don’t recall Belarusian [state] television ever giving me a call.” She added: “I love the kind Russian world, the Russian world of humanities… of literature, ballet, and incredible music. That is the world I love, yes. However I do not love the world of Beria, Stalin, Putin, Shoigu, that is not my world.” Classing Putin, Stalin, Lavrentiy Beria, head of Stalin’s secret police from 1946 to 1953, and Sergei Shoigu, the current Russian defense minister, together is a typically bold statement from a writer whose finely honed interviews with literary heft give voices to the unheard. These include people who suffered during the Soviet war in Afghanistan; victims of the Chernobyl nuclear disaster; and women’s experiences during the Second World War.

Born to a Belarusian father and a Ukrainian mother, Alexievich was raised in Belarus but retains firm national loyalties to both nations, with concomitant distress at Russia’s policies in the Ukraine.

These passionate loyalties and equally firm oppositions are expressed in a literary format finely honed in Europe by a series of supremely talented Jewish journalists who helped restore the interview genre to the level of literature. One such was the Frenchman Joseph Kessel (1898–1979), of Russian Jewish origins, who established that being a journalist did not prevent him from also writing noteworthy novels, including “Belle de Jour.” In more recent years, the veteran French journalist Jean Hatzfeld’s sequence of books of interviews with the survivors and perpetrators of atrocities in Rwanda have attracted widespread attention and acclaim as literature. Of course, the precedent of Plato established that there are no limits to potential quality and contents of writing presented as transcriptions of interviews, but this tradition has been generally neglected, especially in the English-speaking world in recent years. Whether fairly or not, the voluminous, often-fascinating interview books by the Chicago-based Jewish journalist Studs Terkel in their sheer populism and unpretentiousness, based on that writer’s brass tacks experience as a radio broadcaster, seem identified more with journalism of a superior kind than literary art per se.

By further honing this approach to interview-as-literature to express emotional fundamentals expected in literature, Alexievich represents a step up from some recent, controversial Nobel Committee choices. She is the antithesis of the 2012 winner, China’s Mo Yan, accused of pandering to a totalitarian regime as vice-president of the state-approved China Writers Association. Defending censorship in official speeches, Mo Yan produced books that are, according to “The Kenyon Review,” “shockingly banal. The language of Mo Yan is repetitive, predictable, coarse, and mostly devoid of aesthetic value.” Nor is Alexievich anything like Elfriede Jelinek, the Austrian playwright and novelist who received the prize in 2004, so focused on her own neuroses that her writings scarcely convey any discernible message about the outside world.

Instead, Alexievich is a grounded, courageous voice and liberator of other’s voices, worthy of opposing anti-Semitic tyrants and other foes. May she live until 120.