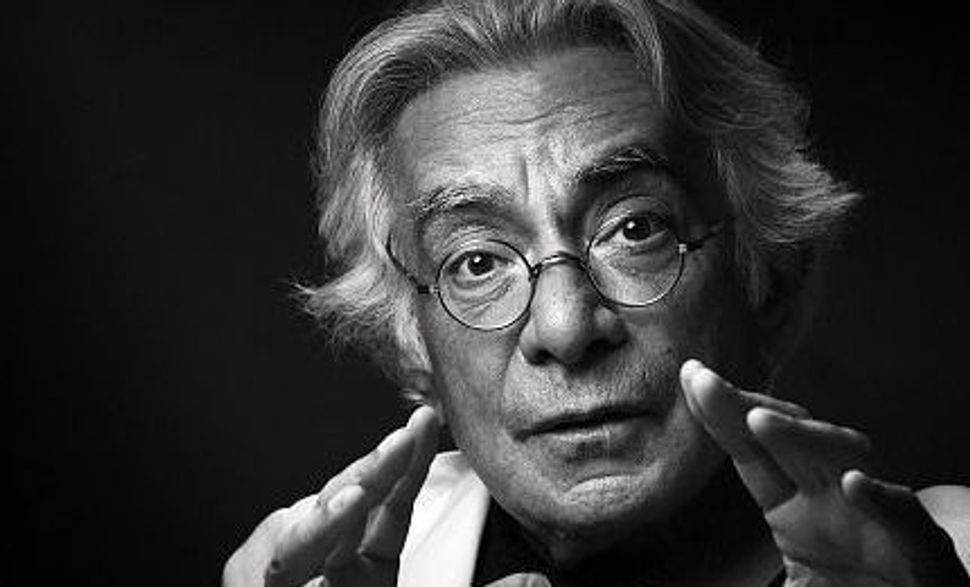 Born in Cairo in 1948, the French Jewish author Tobie Nathan and his family were expelled from Egypt in 1957, during the anti-Jewish persecutions of the Nasser regime. Nathan is an ethnopsychiatrist, a specialist in mental illness in different cultures. He has published books on Sigmund Freud and on the Zionist leader Haim Arlosoroff, among other subjects. Nathan’s novel “This Land in Your Likeness,” (“Ce Pays Qui Te Ressemble”) made the shortlist for France’s prestigious Goncourt Prize this year. A professor emeritus of psychopathology, Nathan continues to work at a center that he founded in 1993, helping migrant families. For a decade until 2012, he also served as a diplomat in Africa and was a French cultural attaché in Tel Aviv. Recently, the Forward’s Benjamin Ivry spoke with him about his achievements.

Benjamin Ivry: Michael Adams, a British journalist, wrote in 1958 in “Suez and After: Year of Crisis” that the “Egyptian government only expelled a small minority of the Jewish population of Egypt, though since that time a good many Jews have left Egypt of their own accord.”

Tobie Nathan: Many people who say things like that don’t know the situation. In reality, when the events happened around 1956, it was like what happened in Germany after Kristallnacht. People went to each Jewish business and took them over. Soldiers followed you to your home and asked where the money was. Some deportations were manu militari [with military aid], and people were told, “You are deported.” Other people discovered that they could not work or eat, and they realized they had to go. When they left, their passports were stamped “Leave Without Return.”

Your parents were nominally Italian by nationality, since only Muslims were readily granted Egyptian citizenship?

Yes, we had purchased Italian nationality in my great-grandfather’s day, because it was the least expensive. [My family] had been present in Egypt for centuries. After the Second World War, some of the Nazis who fled Europe were integrated into the Egyptian hierarchy and no doubt played a role in how the Jews were treated.

“Ce Pays Qui Te Ressemble” evokes an Egypt where for families like yours, a sick child might be treated by a Jewish or Arab healer as well as by a doctor. Who cured you when you were ill as a boy?

That depends who you asked. My mother was a rational woman and gave us medicines which she believed in. My grandmother’s traditional potions were considered a joke by the family, but if you asked her, they worked. The word often used on the subject was “advanced” [(évolué). Someone who was “advanced” thought like Westerners, but others who were not ”“advanced” thought like my grandparents. That is how we lived at the time; it was not what I thought.

You have written: “Migration is a repeated trauma. The first time isn’t the most difficult, but the second or third,” suggesting that a sense of otherness caused by your childhood experiences led you to investigate migrant beliefs as an ethnopsychiatrist. How do we maintain compassion and avoid the feeling that our sufferings are more serious than those of others?

Zohar Zohar, your novel’s hero born in the Cairo ghetto, declares: “We Egyptian Jews have always been there. We were there with the Pharaohs… Egyptian brothers, tenants of a land of relics, you are left with pyramids and empty synagogues. Beware! How can you live without us?” Is there an answer to that question?

There is no answer. Although at the moment there is a reawakening in Egypt about its Jews. This is very new. Until quite recently, the official thinking was that Egyptian Jews moved to Israel to attack [Egypt]. This year there will be a new TV series in Egypt about a love affair between a Jewish woman and an Egyptian army officer. [It’s] the philosophical expression of asking how we can live without otherness. Choices made in Egypt were catastrophic. Before, there were around 20 different communities, and now there is only one. [Egyptians] are wondering what happened to their otherness.

In your autobiographical “Ethno-Roman,” at age 15 you write a novel and send it to the Polish Jewish author and concentration camp survivor Anna Langfus (1920–1966), who won France’s Goncourt Prize for her 1962 Holocaust-themed “The Lost Shore.” In his history of the Goncourt Prize, Pierre Assouline suggests that Langfus was honored as much for the Holocaust theme as for her novel’s quality.

I do not entirely agree with Assouline. It’s true that in the 1960s there was an awakening of interest in the Holocaust in France, but even before then, André Schwarz-Bart “The Last of the Just,” (1959) was a Goncourt Prize winner dealing with the Holocaust. Anna Langfus’s book was the first novel by a woman on the subject. I think her talent was authentic. She was an astonishing woman. She wrote lots of plays, and her novel was fine, strong and powerful about how the Holocaust impacted some people by burdening them until contact with the world was impossible.

As an ethnopsychiatrist, you treat patients for free, which was not exactly the approach of Sigmund Freud or his disciple Jacques Lacan.

(Laughs) My belief is the opposite of Freud, who said the more patients pay, the more they are cured. I don’t think that’s true. I think that the therapist should be a kind of civil servant of healing, and should be free of worldly obligations. If the therapist has a gift for healing — and the word “gift” is important — he should not make people pay for this gift. My work is part of my research as a professor and I was salaried as a professor, so my patients were not obliged to pay me directly. Healing is not a form of merchandise. We cannot buy healing, just as we cannot buy love. That was an error of Freud’s that Lacan pushed even further, making people pay him fortunes.

I don’t know about your cousin, but taking care of migrants in Israel is a crucial issue because Israel is a country of migrants. Eritreans, Cameroonians and Ivoirians continue to arrive, and the Israelis don’t know quite what to do with these people. Everything that psychiatrists studied is useless when they see people from different cultures. In Israel, many Russian psychiatrists are given Ethiopian patients who speak of butchering chickens and drinking the blood as treatment, and the Russian doctors see these patients as savages. I understand the surprise that your cousin might have felt at so many different Jews from Iraq, Eritrea and Azerbaijan, all with different traditions. If you are not interested in learning new techniques of healing, you are completely lost.

In your novel “Who Killed Arlosoroff?” you describe the founding of Tel Aviv as a “freely negotiated contract,” but also as involving a murder. Which myth of origin is true, or are both true?

It is just what you said, Tel Aviv is both. The history of Tel Aviv suggests a family contract stating that part of a beach shall be shared and we will all live together in a social contract. But that’s not possible, that’s not how cities are founded. Behind that were strong political conflicts. There were deaths, and cities are constructed over the graves of enemies. So both these aspects were present at the founding of Tel Aviv. Arlosoroff was forgotten in Israel until the publication of my book in Hebrew, and then they raised a statue to him.

You have said that Jews “do not believe, they do. I love God and would like him to love me, too.” Does being Jewish mean working to build an enduring love?

Yes, that’s what I meant. Something special about the Jews is that unlike Islam or Christianity, you’re not asked to believe as a preliminary. If you do, that’s considered a plus, but whether or not you are a believer, you are still a Jew. The most important thing for Jews is studying, and if you study, at some time you may conclude that God may love you as much as you love him. Unfortunately I have not yet arrived at that point, because I don’t study much. I should study more.