Can Matzo Be the New Bagel? 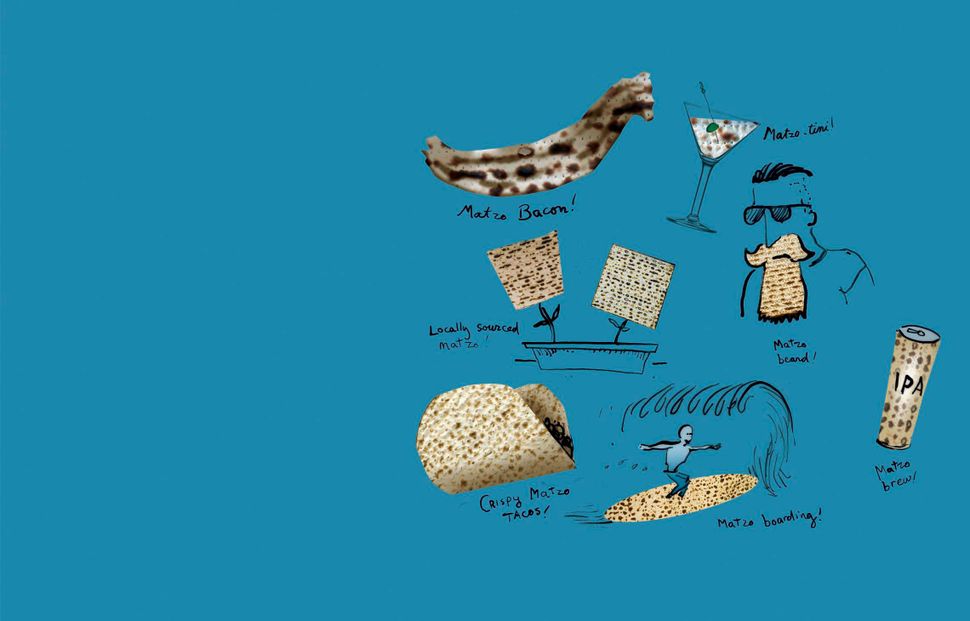 At a press event at Streit’s Matzos in early March, Jill Zarin, dressed in sky-high black patent leather pumps and a crisp white sweater lined with navy blue stripes, and sporting an emerald snakeskin watch, displayed no qualms about interrupting the company’s three executive vice presidents, who are cousins, so she can answer questions from a firing squad of media. She asked to have her hair and makeup done before the event, and her outfit contrasted starkly with the eldest executive’s Streit’s uniform whose name was stitched on the right breast pocket.

Zarin, formerly of “The Real Housewives of New York,” is the company’s new spokeswoman and was signed on for a reported seven-figure deal last November to help it “stay relevant,” as the youngest executive vice president, Aaron Gross, explained. The factory was in the midst of relocating upstate from its storied Lower East Side digs, and the press was peppering the group with questions about its future.

Zarin tried to explain the reason for the move with dictums like “keep the brand alive” and “stay in business,” turning to the executive vice presidents on either side of her and asking “Right?” with her head cocked. One began to reply with an, “Um,” but before he could answer, she fervently began praising Streit’s matzo balls over Manischewitz’s. 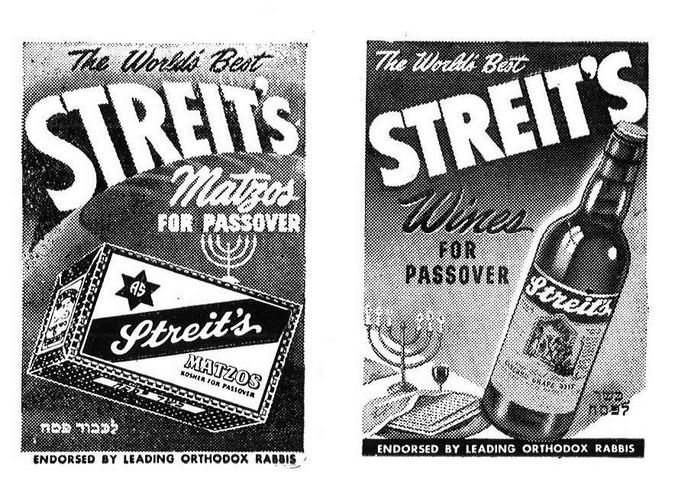 Zarin now has a recipe blog on the company’s newly redesigned website called “Streit From Jill’s Table to Yours,” which features a wind-blown glamour shot of her, and recipes like “crunchalicious orange blackberry salad.” During this past Passover season she toured grocery stores and senior citizen homes, always wearing the fitted gray Streit’s T-shirts that were sold in the retail store. Zarin told me the cousins are available to answer her questions, but for the most part, “I’m pretty self-sufficient.”

Several days after the media tour, Gross said that he wanted to sign Zarin because he thinks of her as a typical Jewish housewife on steroids. She appealed to him because of her large fan base and following, with 1.18 million Twitter followers and her connection to Manhattan’s Jewish Lower East Side; she owns Zarin Fabrics with her husband, Bobby Zarin, whose father started the business.

Industry experts also had another thought. “That tells us that they are extending their reach into the mainstream market,” said Menachem Lubinsky, who is the founder, president and CEO of the marketing firm Lubicom and conducts industry research on kosher foods.

For years, Gross has been pushing to modernize matzo, a traditional cracker often known for being bland, dry and old fashioned. His family has been baking it for 90 years, and Gross’s challenge is how to make matzo trendy. He brainstormed a number of ideas that flopped before signing Zarin. In 2003, when he was 28, he wanted to turn the retail store on the first floor into a bar, and two years ago he talked with Russ & Daughters about opening its cafe there; neither happened. He looked into charging for tours of the old factory, yet they remained free throughout its years on Rivington Street. He also created Streit’s swag to sell in the retail store, and often sports the company’s gray T-shirt like a walking billboard. 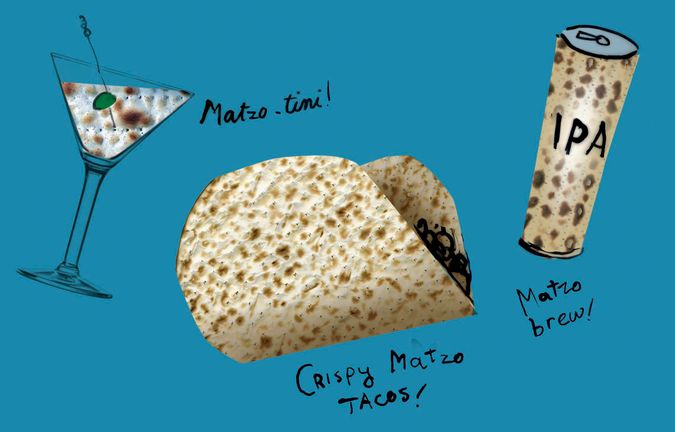 Other ideas have included healthy alternative ingredients to its flour base, and flavors other than plain. But now he wants to market toward a younger, secular consumer base and to advertise the cracker as not just a Jewish holiday food, but also a low-carb snack, or “bagel alternative.”

He isn’t the only one who’s experi menting with these ideas. Manischewitz has been attempting to shed the stuffy, uncool stereotype surrounding matzo and kosher foods as well. It is the only other matzo manufacturer in the country, and it has continuously maintained dominance over Streit’s in sales and production. Of the $84 million in matzo sales produced in the United States in 2014, Manischewitz produced around 65% and Streit’s 35%. Manischewitz already boasts a huge line of products, with matzo flavors like yolk-free egg, garlic and rosemary, and “everything,” none of which Streit’s makes. This is another reason Streit’s has decided to vacate its historical and nostalgic location on the Lower East Side — to surpass Manischewitz in the creativity department.

The challenge is that Jews are observing holidays less than. According to a 2013 Pew Research Center survey, 70% of the respondents participated in Passover, an 8% decline from 2001. The survey stated that this was “mostly fueled by the increasing percentages of Jews of no religion.” The report found that 32% of Jewish Millennials marked “no religion,” meaning they were raised Jewish or have Jewish parents, but do not identify as being Jewish for religious purposes. 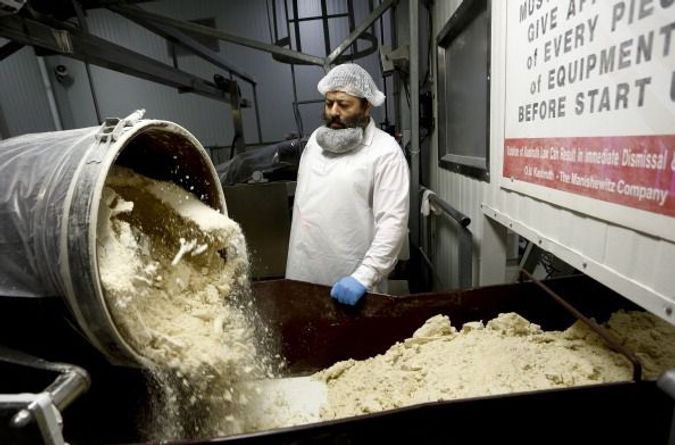 Matzo Production Manischewitz and Streit's want to experiment with new flavors to reach a broader consumer base.

“Beyond the core kosher market there are several million Jews who do not eat kosher year-round, so there is an attempt to pitch to them to use more kosher products throughout the year,” Lubinsky said.

Gross agreed. “I want everybody in America to think of it as nothing to do with Passover during the year, but think of it as something they can have for breakfast, as an hors d’oeuvre, and a cracker,” he said of matzo.

Jonathan Sarna, a professor at Brandeis University and an expert in matzo history, said penetrating a mainstream market has proved difficult for matzo bakers.

“It hasn’t been easy to market outside, but clearly the profits of the company depend on its ability to market Passover to a young and larger audience,” he said.

Manischewitz first used advertising in America in 1920 to send a message opposite from the one the company and Streit’s are sending today. It was the first company to introduce machine-made matzo, and with that came the idea of modernization. Yet the Old World, European Jews in America at the time, who were used to hand-made delicacies, wanted to adhere to tradition. According to a paper written by Sarna called “How Matzah Became Square,” Manischewitz put out advertisements saying that Rav Kook, a chief rabbi of Israel, recognized that the company offered “the greatest possible assurance of kashruth,” or “kosher.” Similarly, an old Streit’s billboard stated, “Famous for quality and kashruth.” Later in the 1950s and ’60s, Streit’s ads continued to emphasize how its products aroused familial values. One for gefilte fish exclaimed, “Your taste buds will tell your memory: That’s the way I remember gefilte fish from grandma’s kitchen… not too spongy, but not too solid, not too bland, but not too spicy!” 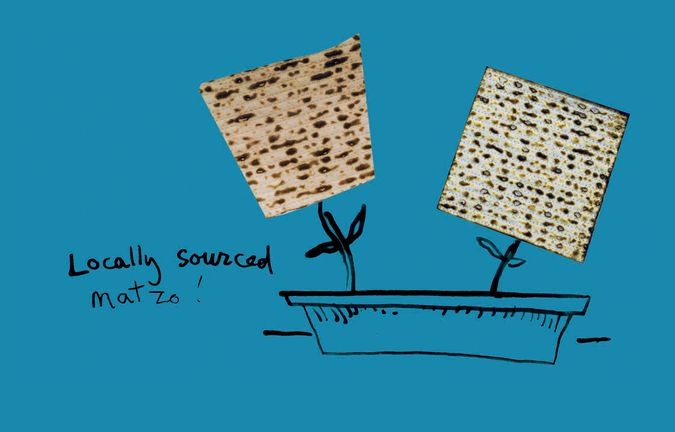 “Streit’s is the brand of matzo meal that my Grandma Helen used since I was born. For me it was tradition. My grandmother always made potato latkes and matzo ball soup,” Zarin said.

Now, about 100 years later, the companies want to kill off any association with Grandma. “We’re trying to let people know we aren’t your grandmother’s brand anymore. We are a modern brand,” explained Sara Stromer, assistant brand manager at Manischewitz.

Manischewitz doesn’t have an official representative, but this past year it has also made greater strides to attract Millennials while veering away from the Passover-only mindset regarding matzo. In March it presented its first ever “Manischewitz Experience” in a gallery space inside Chelsea Market. On a Friday afternoon, about 75 people, mainly adolescents, buzzed around the room, checking out the various stands set up like a carnival. They roasted matzo S’mores and sampled matzo pizzas — the most popular station— and latkes. Songs like “Happy” by Pharrell Williams played, and the employees, who didn’t actually work for Manischewitz but were hired just for the gig, ran around in Manischewitz T-shirts, handing out fliers and checking up on customers with wide smiles. A giant gumball machine filled with macaroons sat in the middle of the room, but in order to receive a cookie, customers had to first post a photo on social media and show it to the woman guarding the station. Behind the machine, teenagers squished together for a selfie eating the S’mores.

Stromer added that bringing to the event celebrity chefs like Katsuji Tanabe, who won “Chopped” on the Food Network, helped the company refine its line and prove that by utilizing the cracker for all-American recipes like matzo pizza, it can be eaten any time of year.

Despite this effort to branch out, the majority of events and big media pushes occur around the holidays. Gross explained that it’s a time that shopping in the kosher aisle at the grocery store is heightened.

Errol Schweizer, the global executive grocery coordinator at Whole Foods, said that the company puts a strong emphasis on pushing out matzo and other kosher items during the holidays. He said the grocery store has seen a 20% growth in kosher sales each year for the past several years, but the majority of these sales occur around Jewish festivities.

Whole Foods, which has had a partnership with Streit’s for a decade — Manischewitz is not a top priority for the grocer — meets with the matzo executives nine months before the holidays to collaborate about how to give shoppers what they want.

“We’ve helped drive that trend,” Schweizer said about bringing matzo to mainstream consumers. “A lot of the changes in retail are coming from Whole Foods. Organic and whole-wheat matzo was really pioneered by us. Gluten-free, spelt matzo, those are all products that we helped to bring to markets.”

For Streit’s, though, signing Zarin checks off one item on a long list of efforts to reform. Gross admitted there is greater opportunity for the company to keep expanding and hopefully place its products in aisles other than the kosher section. Eventually, he said, a total rebrand might be considered.

“There are ways to tweak our traditional items, and if you put the money and the marketing behind it and give it the right packaging and name, you can give it to anybody,” he said.

Zarin’s already started to bake up some ideas of her own, including hosting a flavor contest where one Millennial could concoct a new flavor and name it for himself or herself. She plans to enlist her 22-year-old daughter, Ally Shapiro, to help brainstorm.

“They’re not going to tap into the people who are dying,” she said about Streit’s. “It’s a delicious food, so it’s just about marketing.”

Can Matzo Be the New Bagel?