Revising and Reviving ‘The Rothschilds’ 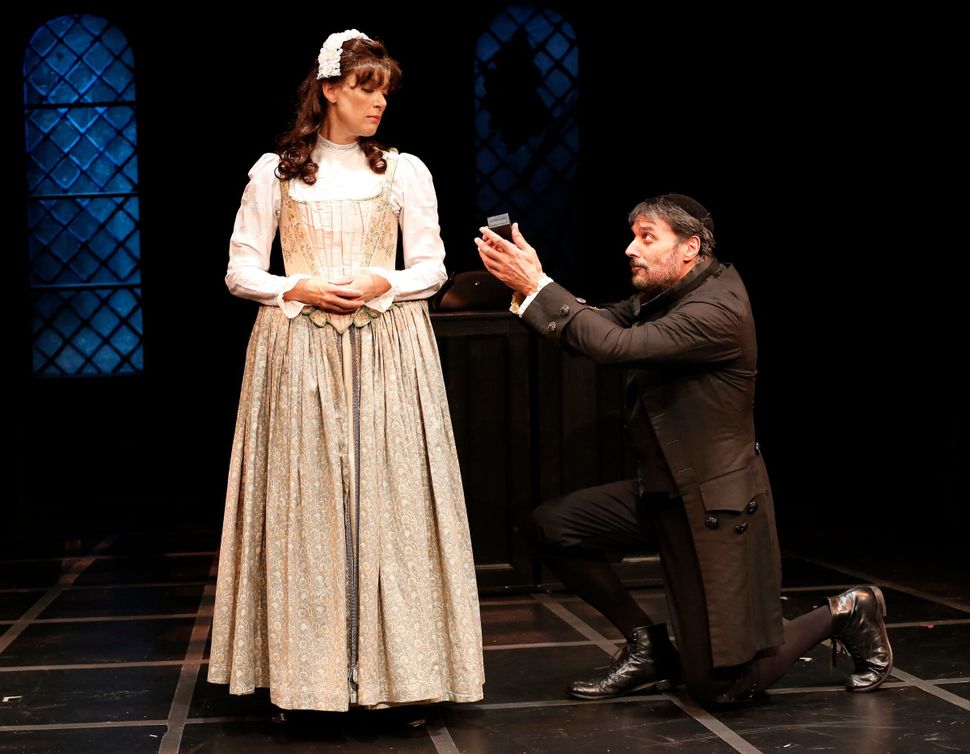 “Fiddler on the Roof,” composer Jerry Bock and lyricist Sheldon Harnick’s great, melancholy look at Ashkenazic history, with a book by Joseph Stein, opened on Broadway in 1964 and ran for nearly eight years. It ends, heartbreakingly, with the villagers of Anatevka, ejected from their home, marching west, ready to start new lives — marching, we know and they don’t, to be slaughtered.

While “Fiddler” was still running, in 1970, Bock and Harnick’s final collaboration arrived on Broadway, with a book by Sherman Yellin. “The Rothschilds,” about the founding of the banking dynasty, looked at a more urbane set of European Jews, confined not to the Imperial Pale but to the Frankfurt Ghetto. It was an uplifting story, with a happier ending, a historical version of “the happy Delancey Street-to-Beverly Hills miracle,” as Yellin put it in a Times essay published then.

It was also a less compelling show. “Bonds don’t dance, dollars don’t sing,” wrote Walter Kerr in his review. The Times critic praised the first act of the “unhappy musical comedy,” focused on the family, while dismissing its dull second one, focused on the finance. “The Rothschilds” ran for 14 months.

Forty-five years later, and seemingly in direct response to that Kerr critique, Yellin, with help from Harnick (Bock died in 2010), has revised “The Rothschilds” into Rothschild & Sons,” which its press agents are calling “and intimate one-act reimagining of ‘The Rothschilds.’” It focuses on the family rather than the finance (and is a one-acter only in that it offers no intermission despite a nearly two-hour runtime and a midpoint song that would be make an excellent curtain number). The revised book and song list includes some previously unheard Bock-Harnick compositions.

“Rothschild & Sons” has opened at York Theatre Company, and it makes the argument that the billions were incidental, that Mayer Anselm Rothschild’s real goal in building an international banking dynasty was the emancipation of Europe’s Jews. It features some lovely songs and a single-minded, inelegant script that moves with all the subtlety of a load of gold bullion. It is ploddingly, sloppily directed by Jeffrey B. Moss, with performances in a range of accents and scenes in a range of tones. On the evidence, it would make for an excellent Hebrew school history pageant.

The play opens just after Mayer Rothschild’s death. An unctuous Prince Metternich (Mark Pinter, who plays all the German princes with whom the Rothschilds interact, and does so in a caricatured manner that if applied to the other roles would be called anti-Semitic) is paying a condolence call to his widow, Gutele (Glory Crampton, here a frosty WASP matron, elsewhere a kvetchy, nagging Jewish wife). Metternich is dismissed, and then we flash back to the start of the Rothschild story.

Mayer (Robert Cuccioli, who played Nathan, the son who founds the English bank, in a 1990 off-Broadway revival of “The Rothschilds”) is wearing a tricorn hat and a yellow armband, so we are either in Revolutionary America or Nazi Germany or, as is in fact the case and you’ll figure out once you piece together the history and perhaps check Wikipedia on your return home, in some combination of the two, which is to say pre-unified Germany in the mid 18th century. He is rushing home from Hanover, where he has been working as a shopkeeper (in truth, it was an apprenticeship at a German Jewish banking house), to his beloved Gutele, in Frankfurt, where he has realized he can take over his father’s shop and be his own man.

But he and Gutele can’t get married, because there is a quota on Jewish marriages, and the waiting list is long. He has rare coins, and he sells them to nobles. Quickly enough, he wheels and deals and sort of bribes the prince into granting him permission to marry. Then he wheels and deals his way into a position as the prince’s banker. Plus, in the course of a single song, he — well, Gutele — has five sons. The boys work in his shop, and study foreign languages, and occasionally hide from marauding mobs, and squabble amongst themselves. (Even notwithstanding colorblind casting, they look nothing like brothers. But, then, dad also sounds like he’s one generation removed from Flatbush.) It’s an international banking network in waiting, and when the Napoleonic Wars arrive, thank God, Mayer’s ready to put his plans, and his boys, to work.

Nathan (Christopher M. Williams) has a very bad day on the London stock markets, and then he has a very good one, while smoking a cigar, and from this we see that the family has become supremely successful. When the British need a loan to finance the battle against Napoleon, Nathan attaches a condition: After the war, ghetto walls must fall across Europe. The loan is made, Napoleon is defeated, Rothschilds are richer, and restored European royalty conveniently forgets their promise. Mayer, who counseled against trusting the Europeans, is now devastated they’ve reneged. He realizes he is Moses, never to see the promised land.

It is this hokum, the cloyingly sentimental portrayal of some sort of do-gooder banking — financiers sans frontiers! — that undercuts the more successful parts of “Rothschild & Sons,” notably Bock’s melodies, which vary among court-like minuets and ghetto-flavored clarinets, and some of Harnick’s lyrics, which are often far more lyrical takes on the action described in the book scenes. (That the songs are often recapitulations of the action that just transpired, rather than anything that moves the story forward, is its own problem.) If Kerr saw an unhappy musical comedy, this is an untriumphant musical tale of triumph.

Mayer, now Moses, dies. And the boys come together, inspired by mom, to once again use their financial leverage to force the European powers to free their people. They vow to risk losing everything. They make their threats. It works. In the end, they lose nothing; in fact, they gain titles. In bestowing them, Metternich makes that smarmy shiva call. We’re back where we started. Sunrise, sunset.

Jesse Oxfeld has written about theater for New York magazine and the New York Observer.

Revising and Reviving ‘The Rothschilds’