My Big Sabbath Lie — and the Joy It Brought 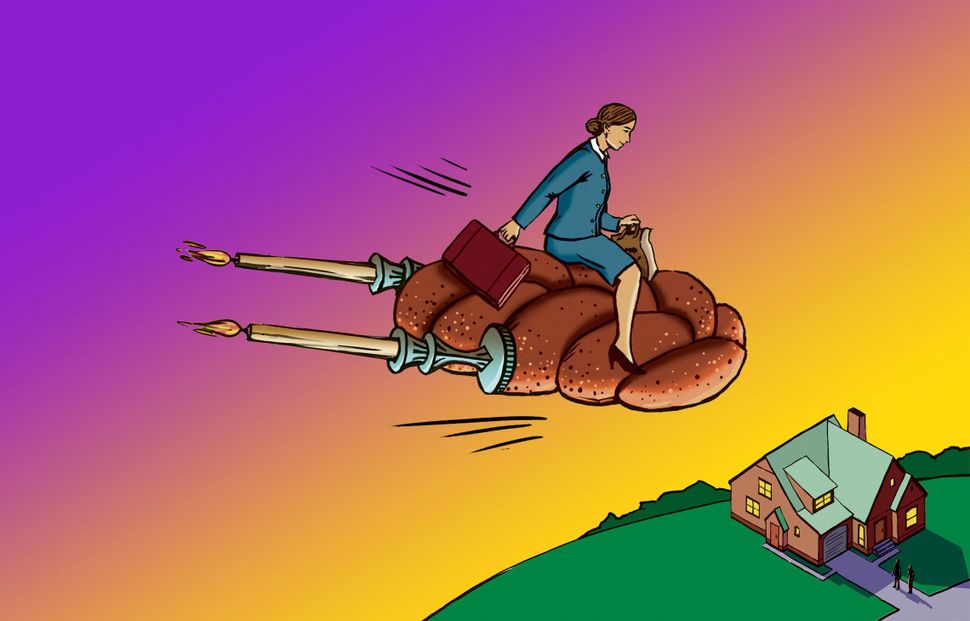 It is 4 p.m. on a September Friday and I have just completed my first week at one of New York’s august law firms, the kind that prides itself on keeping its junior lawyers toiling into the wee hours and all through the weekend. Yet here I am, heading home to Brooklyn to spend the weekend with my two sons.

For a single mother raising two young boys — and two dogs — my law school success was considered miraculous, and my job at a prestigious firm is expected to continue that trajectory. But in law school I could keep my own timecard; now I serve masters who, in fond remembrance of their own early years in the law, happily continue a custom of 90-hour workweeks.

I have left my calling as a professor of philosophy for a career that offers a better means to provide for my children. But will this boost to the domestic coffers cost me precious time as a parent? I’m plagued by the suspicion that my shiny new career may prove a terrible mistake; I worry day and night that I am actually abandoning my primary responsibility.

Ever since my husband and I separated, I’d stuck firmly to our tradition of family dinners. Coming together at the end of each day to share the day’s stories over a meal is, I’ve always believed, the secret ingredient in emotionally healthy children — all the more so when other family bonds have been tested and damaged by divorce.

I explained my philosophy of childrearing to my employers when I was hired, and swore that taking work home at suppertime would not diminish the quality of what I could produce. They smiled knowingly: This woman will soon learn that the pay at plush New York firms demands domestic sacrifice, they thought. I was not the first woman who thought she could change “the system.”

On my first assignment I was teamed with another new associate, Saul, a Sephardic Jew who lives in Flatbush and is, like most new associates, much younger than I am. He lives with his parents and banks his paychecks while saving for an apartment of his own. At Friday’s lunch, he remarked that he’d informed our supervising partner of his intent to leave early to reach home in time for the Sabbath.

So. Saul will leave early. Every Friday. Earlier and earlier as the days get shorter.

So, then, Saul will not be in on Saturdays. He won’t be in on Sundays, either, because weekend assignments are a package deal. So, Saul will never work on weekends!

Suddenly, the way out of my conflict became clear.

As my train rumbles toward Wall Street, I find myself exultant and sorrowful, all at once. The unthinkable fact is that, a mere one week into my new career, I have lied to my employer. Not only that: I have told the worst of all possible lies!

At Wall Street I transfer to the express train. In just minutes I will arrive in Brooklyn. My sense of triumph at having pulled off a marvelous coup has dissolved completely into profound remorse. I have lied about… my relationship with God!

I am not religious, have never observed the Sabbath at home. My elder son, Matthew, reluctantly celebrated a bar mitzvah at his grandmother’s insistence; my younger boy, Ethan, aware that his brother garnered mucho loot for his troubles, has more willingly embarked on that same project. There is no question that I’ve been lax in teaching my children the Jewish rituals. Now, it seems, I have traded my guilt about caring properly for my kids with a new and surprising variety of that same emotion.

I emerge from the subway, a black tangle of bad feelings tightening about my brow like an ill-fitting hat. I really don’t regret having lied to a century-old New York law firm: They should accommodate their former practices to the needs of women attorneys. It is the particular lie itself that feels so terribly wrong.

In a fog of self-reproach, I drift into the little bakery on Henry Street and ask for a challah. Also a fruit pie.

Still in a melancholic cloud, I enter the liquor store and ask the baffled owner for a bottle of kosher wine. He knows my preferences in reds and whites. What do I want with this sweet stuff that’s not even good for cooking?

“Guests,” I say, and want to bite this new lie off my tongue.

Finally, it’s down the steps to the Variety Mart, where turpentine and floor wax mingle their odors. “A box of white candles,” I say to the Cuban owner. “The ones for Friday nights?”

At home, Lorraine, the woman I employ as a mother’s helper, is startled by my early arrival, and plainly confused when I announce that we will be preparing a Sabbath dinner. “We’ll need an ironed linen tablecloth and napkins, and fruit or soup before the main course,” I tell her. “We’ll roast a chicken. I’ll show you how.”

When my eldest arrives home, he demands to know what’s going on.

“Hypocrite,” he says. “You’re just doing this because….”

“You don’t have to live the lie you told, you know.”

He was always that kind of kid.

His younger brother is enchanted by the preparations, especially by the yellow braided bread and the bakery shop dessert. And there is a starter I’ve devised for this occasion — a plate of sliced apple, orange, grapefruit and kiwi, bathed in Cointreau. Not a traditional Sabbath dish, just something I’ve dreamed up to mark the special-ness of this meal.

Lorraine beams as we gather around the table and I light and bless the candles. The boys join in, blessing first the wine and then the challah. Before we start our meal, I say: “I promise you that, no matter what the weekdays bring, I will always be home for dinner on Friday nights, and I will always be here for you on the weekends. This is my covenant with you,” I tell them. “I will be here for Shabbat… and so will you!”

Matthew, who is beginning to notice girls, frowns at this last part.

But that is the way God made His covenant with Israel. It was not a contract agreed to by two equal parties. God said what He would do, and then told the people what they would do in return. Just laid it down for them.

“You can invite your friends to join us,” I tell Matthew. “There will always be room at the table. But you will be here every Friday night for dinner, no matter what else you have to do afterward.”

This seems okay. Matthew may want to be out with his friends in the evening, but he’s not yet prepared to take a girl to dinner.

Ethan finds the whole idea ingenious; he is already compiling a list of invitees.

The freshly pressed linen, the glowing candles, the saffron-scented bread and wine — all make our Friday suppertime an evening apart from the others. My children arrive at the table clean and radiant; in later years, they even shave for the event! They unfold their linen napkins in their laps. The conversation is more civil than usual; no one starts a fight.

Word spreads in our building about the candle-lit dinners in our apartment, and invitations are sought. Children of all backgrounds learn to say “Shabbat.” A few try to learn the blessings.

Occasionally there is some griping, concerning a basketball game or a birthday party that will conflict. I say: “I’m sorry, but this is the way we do it here. It’s our covenant.”

Over the months and years, Shabbat acquires a powerful presence in our home, sustaining our tiny family through the years that I labor at the law. (When interviewing for a new job, my Sabbath observance is one of the first things I reveal to prospective employers. Many are charmed by my “good family values.”)

Matthew leaves for college, and Ethan invites more friends to join us. I invite friends of my own. Our table is always bountiful, and seats are in demand. The lie I told to my first employer turns out to be one of the best mother-things I’ve ever done. When Ethan leaves for college, it’s time for Lorraine to move on. Alone with Sam the beagle, I am tempted to stop cooking and explore the world of takeout. I struggle with this, then decide I must continue the tradition of the Sabbath. I invite friends each week. I light candles and bless them. I bless the wine and the bread. My guests open their soft napkins in their laps. This is, perhaps, a strange way for a single woman to behave when others all over the city are gathering in pubs to share a drink at the end of the workweek.

As it is said, “More than the Jews have kept the Sabbath, the Sabbath has kept the Jews.” Sabbath dinner outlived its usefulness as the ritual that kept my family intact, and shifted to being something else: a transfer point from the frenetic world of international banking to a world of reflective inwardness and peace.

Susan Pashman is the author of the novel “Upper West Side Story” (Harvard Square Editions, 2014). This story is excerpted from her forthcoming book, “Journey to a Temple in Time: A Philosopher’s Quest for the Sabbath.” Pashman’s grandfather, Henry Greenfield, served for several decades as the managing editor of The Jewish Daily Forward, and as station manager of WEVD.

My Big Sabbath Lie — and the Joy It Brought