When Will Anne Frank Enter the Public Domain? 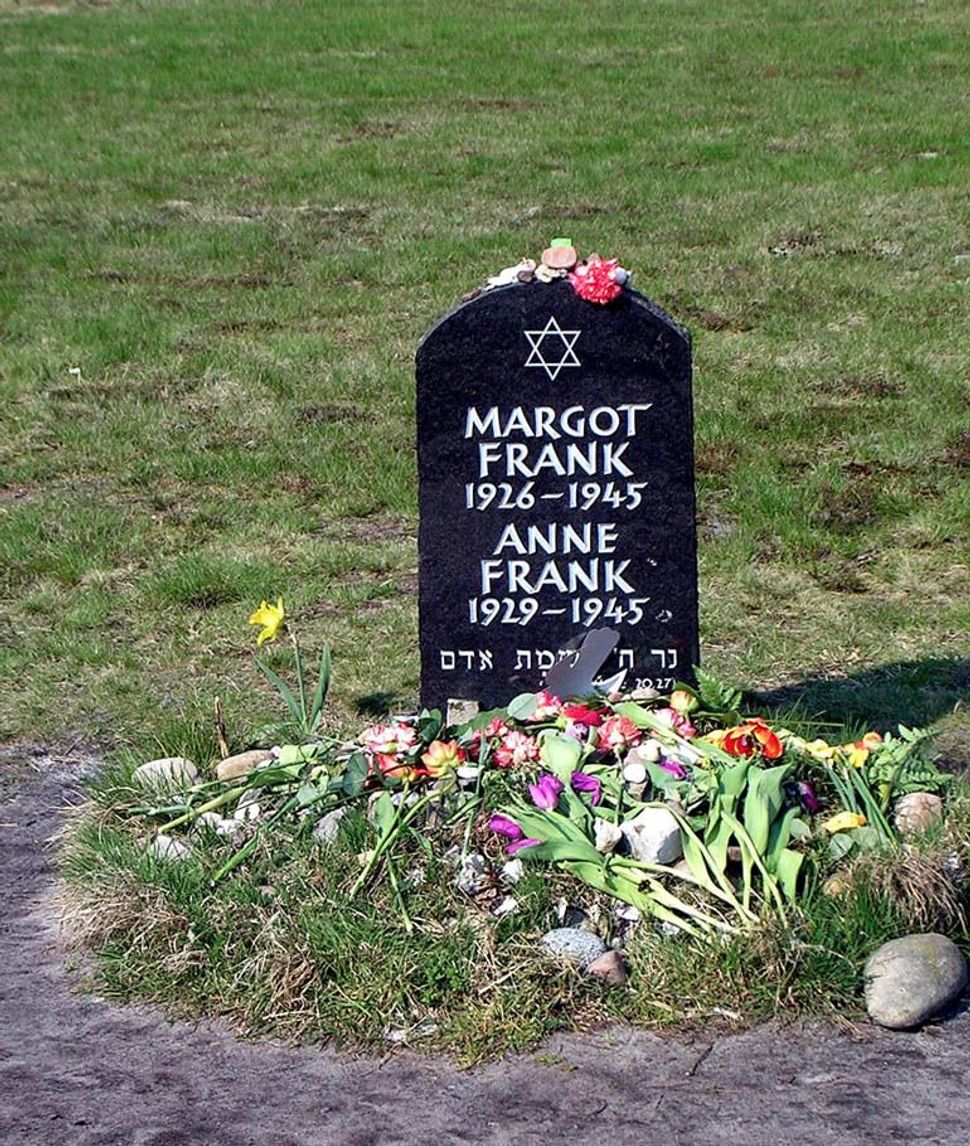 The Anne Frank Fonds was established in Basel, Switzerland, in 1963 by Otto Frank, the father of Anne Frank, as a charitable foundation. On October 6, the AFF informed Livres Hebdo, a French book trade publication, that the copyright on the “Diary of Anne Frank” would not expire in 2016, as had been expected to happen. Despite national copyright laws indicating that works fall into the public domain 70 years after the deaths of their authors, the copyright on the work by Anne Frank, who died of typhus in Bergen-Belsen concentration camp in 1945, would continue until the mid-21st century. This statement caused an outcry among international public domain and information-sharing advocates. Benjamin Ivry spoke recently with Yves Kugelmann, an AFF board member and spokesman who is also editor in chief of the Swiss Jewish newspaper Tachles and the monthly Aufbau.

Benjamin Ivry: Why has the diary’s copyright expiration been extended from 2016 to years later?

Yves Kugelmann: There is no extension or prolongation. We just informed people about the legal situation. The applicable laws say that the Anne Frank diary is protected until around 2050.

In 2014, you told the Dutch newspaper NRC Handelsblad: “The copyright needs protection because we don’t want a slew of inferior products on the market. It’s a fragile text.” What did you mean?

For over 30 years there has been a discussion of the falsification of the diary. We of course have proven that the text is authentic and not a falsification. Today, more than ever, Holocaust deniers and other ultra-right-wing groups take the diary as proof that the Holocaust did not occur because the text does not mention gas chambers. So we must protect its authenticity in the way we publish it.

Alexandre-M. Braun, a Parisian lawyer, has said that the AFF’s announcement “makes no sense…. Her diary must indeed fall into the public domain in 2016…. The arrival of her diary in the public domain is legal, and above all justified.”

I didn’t speak to Alexandre-M. Braun, but I know we did not make a general announcement, but only informed the publishing industry as a measure of fairness about what the copyright situation is with Anne Frank. Whatever public opinion on copyright law may be, the diary is protected.

On his blog, Michael Factor, an Israeli patent and trademark attorney, suggested, “The diaries should enter the public domain… I am not a great fan of using trademarks to extend copyright either.”

We are dealing with about 70 or 80 territories. and whenever you print a book in a country you have to deal with a trademark, and for a publisher to protect a trademark seems to me normal. We are in a situation where we have to deal with the rights, because we are the owners of the rights. In a way you are blamed for protecting something that you own, and people who violate that ownership with piracy are not blamed. The family of Anne Frank does not receive a penny from the books; it all goes to charity. All the money goes back to society through the charitable organization.

The AFF has sponsored educational projects, including a Nepalese girls’ dormitory, a Swiss project for the disabled and Israel’s Leo Baeck Education Center. What will happen to such causes when royalty income from the diary vanishes after the copyright expires?

We support hundreds of charities, including UNICEF. We were not founded to last for the next 5,000 years. As long as we get royalties, we have the obligation and duty to help people with charity. For the moment, we can sell our books, but at some point that will change.

After a 2013 legal judgment, a large collection of items belonging to the Frank family, previously lent to the Anne Frank House, in Amsterdam, was returned to the AFF, and will be part of the collection in the Frank Family Centre, an annex to Frankfurt’s Jewish Museum to open next year. Since Anne left Frankfurt with her family at age 4, can she really be identified as German?

Twenty-thousand documents were loaned to the Anne Frank House in 2006. We made a decision that we would put all archives in the Frank Family Center in Frankfurt, where the family came from. In Frankfurt there will be no Anne Frank exhibition, but the Frank family archive, and the museum will tell the story of several Jewish families moving to Frankfurt, such as the Rothschilds as well as the Franks.

Why did Otto Frank dislike the shrinelike atmosphere of the Amsterdam Anne Frank House?

Otto Frank was strongly Jewish in cultural ways, although liberal in religious observance. In the Christian tradition you make dead people into icons, whereas in the Jewish tradition you focus on books and other written evidence, and so Otto Frank did not want a mausoleum or museum or images of his daughter on display, but wanted her remembered only by her own text.

In 2013, you were quoted in Der Spiegel: “The Fund is the universal heir appointed by Otto Frank. It was always opposed to a pilgrimage site. It was opposed to someone making money off of Anne Frank. Now there is a museum in Amsterdam that largely de-contextualizes and de-Judaizes the Frank family.” You also stated that the Anne Frank House suggests that “Anne Frank is a Holocaust Tamagotchi.” What does this reference to the Japanese handheld digital pet mean?

The question is how Anne Frank is remembered and what people make out of her. On the one hand, people are seriously dealing with Anne Frank and respect her history, but on the other hand, there is a whole industry taking her out of context as an icon for anything and everything. I don’t think that is a useful way of dealing with the subject, as if Anne Frank becomes the most important Holocaust victim and sets aside all other victims.

In 2013, Eva Geiringer Schloss, a Holocaust survivor and stepdaughter of Otto Frank, told The New York Times, “It was never the intention of Otto that the Fonds should have any exhibition at all — that was the House,” and Frank, as an assimilated Jew, did not believe that Anne’s story should be presented specifically as that of a Jewish girl.

I can’t really comment about Eva Schloss, but there is a contradiction between what he [Otto] writes and what she says. I would rather go with what he says, since he founded our foundation. The fact is that in Holland a high percentage of Jewish people were deported and killed. This fact is a stronger argument to deal with than only one girl who became famous and is dealt with as an icon. I don’t think Holland should have one house for only one victim. Most Dutch Jews were not in hiding, they were denounced by their neighbors and deported, and Dutch society has to deal with this.

Why have so many aspects about Anne’s diary resulted in bitter disagreements? Is it good that people still care so passionately, or is the recurrent controversy just tiring?

Most of the time it’s really tiring. In public society it is important to have discussions about everything. The question is if people are really dealing with the subject at hand or their own personal agendas. Most of the time I feel that Anne Frank is used as an excuse to deal with some agenda other than the diary itself. The text is an important heritage and witness for the 20th century; it is simple and does not require lots of discussions to understand it, but that is not how things turn out.

What is made out of the story of Anne Frank is that she lived in an annex, which is not representative of being in hiding or being a wartime refugee, and this story was made into an icon of the general experience of Holocaust survivors, superseding what happened to people after deportation. This later story, because it is not in the diary, is mostly forgotten. As an educator I wouldn’t only go for Anne Frank. I would rather take, for example, from Elie Wiesel or other writers of stories more indicative about what happened in Europe. I am not criticizing Anne Frank, but how society takes her out of context and makes her the quintessential Holocaust victim, which she is really not.

When Ari Folman, the Israeli director of “Waltz With Bashir” finishes his animated film version-in-progress of Anne’s diary, blending traditional animation with stop-motion, won’t that become the most lastingly influential adaptation of the diary?

We initiated the Ari Folman project for some good reasons. The play from 1955 by Goodrich/Hackett, which is still staged, is an old play based on a shortened version of the diary. With animation, we can reach today’s audiences and tomorrow’s, dealing with many situations which were possibly not needed in 1955 and maybe not even possible to deal with then.

When Will Anne Frank Enter the Public Domain?