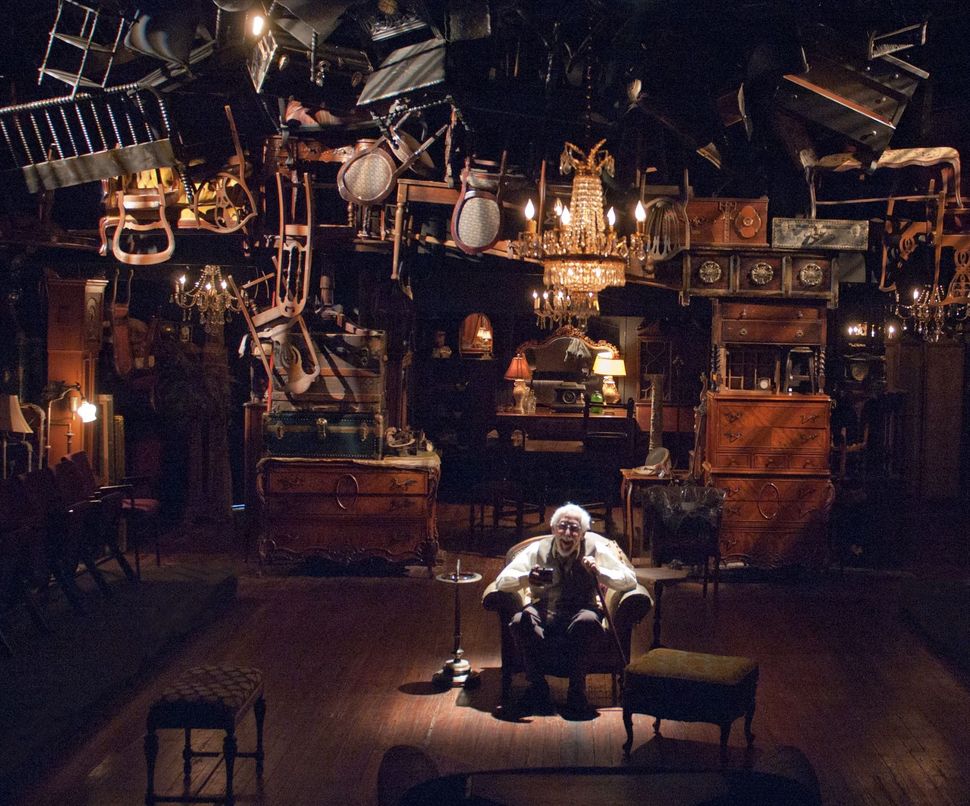 At 91, Mike Nussbaum has been called the oldest professional actor in theater. He’s currently playing the role of Gregory Solomon in Arthur Miller’s 1968 play “The Price” at the Timeline Theatre in Chicago. After spending about 17 years in the exterminating business, Nussbaum got his acting start with playwright David Mamet, eventually appearing in Broadway productions of “Glengarry Glen Ross” and “American Buffalo.” In Chicago, Nussbaum is a theater legend, and the role of Solomon — a Russian-American furniture dealer — seems almost as though it was written specifically for him.

“In brief, a phenomenon,” Miller wrote of Solomon in his notes for the play. “(He is) a man nearly ninety but still straight-backed and the air of his massiveness still with him. He has perfected a way of leaning on his cane without appearing weak.”

Nussbaum plays Solomon with a thick accent and Yiddish inflections, and provides comic relief in what is an otherwise serious play about sibling rivalry, the price of morality and the effects of the Depression on a once-wealthy family. One brother, Victor Franz, gave up science and became a cop to care for his ailing father, who lost millions in the 1929 crash, while the other brother, Walter, left his family behind and became a successful doctor; it’s now 16 years after the father’s death and Victor has summoned Solomon to help sell the family’s possessions.

In the final scene of the play, after everyone else has exited, Solomon remains alone on stage. He plays a phonograph, drinks from a flask, then delivers the play’s final line: “L’chaim.”

No, Nussbaum added the word.

“If Arthur Miller were alive, I probably wouldn’t have gotten away with it,” Nussbaum says as he sits backstage before a performance. The actor is 5 feet 2 inches tall, and yet, as Miller wrote of Solomon, he projects strength and massiveness.

“I certainly would have asked. It appears to me [Solomon] is clearly asked to look at this massive furniture display and to feel the doubt he feels, but the whole point of his purchasing this stuff is to animate his life. It’s a forward looking moment, an affirmative moment — a celebratory, ‘I vote for life!’ moment. I thought ‘L’chaim’ was exactly what it is about — it was entirely a character choice that fits the mood and the play perfectly — the hope that this will give him another year and half of life, of active life, so I thought it was worth saying, and the director accepted it.”

Miller’s stage notes suggest that Solomon is a dark figure, that he perhaps manipulated the brothers: Nussbaum’s portrayal is lighter, and the actor views the laughter that Miller calls for at the end of the play as being optimistic. “That’s the way I play it,” Nussbaum says. “That is my concept — in this stage of my life and in the stage of the play — modifications of interpretation are exactly what we want. I thought there was a man laughing at the end partly because he is amused, but more because he is feeling joy at the prospects. It’s not a man who is laughing at the horrid things in life that he has faced all his life, he is not laughing at that, I don’t think. I would argue with Arthur if he were alive. As good as he was, he was of his time. I am too —since I am still alive and still working, but I am also influenced by the now. I am influenced by new interpretations of theater — I find that more interesting than in doing old plays the way they were done.”

Although Nussbaum told me he doesn’t consider himself a religious man (though he was bar mitzvahed, as was his son), he says, “There is no question in my mind that my work is informed by my past and my heritage.”

This is also not the only role in which Nussbaum has added Hebrew to his lines; he did it 10 years ago when he played Shylock in a Chicago Shakespeare Theater production of “The Merchant of Venice.”

“There were times in Shylock where I used Hebrew words — Shema Yisrael,” Nussbaum says. “At first I used to say the Shema sotto voce, and then [the director] said, ‘what is it you are saying?’ I explained, and she said say it out loud.”

Nussbaum also added the Kaddish prayer to his portrayal of Shylock. “To me, the turning point of that particular play is the apostasy of his daughter — not that she runs away to get married, but that she leaves the religion,” says Nussbaum. “Literally, she has become dead to him — so I added part of the Kaddish. I am a totally unreligious person, but those things worked for the character.”

Nussbaum says that Shylock is one of three favorite roles he has played. The others are Willy Loman in Miller’s “Death of a Salesman” and Hamm in Samuel Beckett’s “Endgame.”

When I said to Nussbaum that Willy Loman is a very different role from Solomon or Hamm, clearly not as optimistic, he countered by saying that, in the end, even Loman has what one could call a “l’chaim” moment.

“Willy Loman commits suicide at the end in the hope the insurance money will give his son life, the impetus to create the kind of fairy-tale life his father had hoped for,” Nussbaum says.

“Mostly a play is offered to me and I don’t look for political or other reasons to take it,” he says. “I did a play about Freud recently that I loved doing. It was about a man fighting the pain of cancer yet still vitally alive, still arguing about religion. If you could have a choice — to get plays that talk about serious issues, particularly for old men like I am — that would be the best of all possible worlds. I still have a lot of vitality and I like to be able to use it, to show there are 91- year-old people still able to do these kinds of things.”

I asked Nussbaum if there was a role that he still wants to have the chance to play? “Right now it is the next role, whatever that is, and there is no role in prospect, and that is a scary thing to think about, that maybe my career is over and I don’t want it to end,” he says. “But if it is, I had a good time.”

Laura Hodes is a writer and attorney based in Chicago.