Was Gore Vidal the Real Crypto-Nazi? 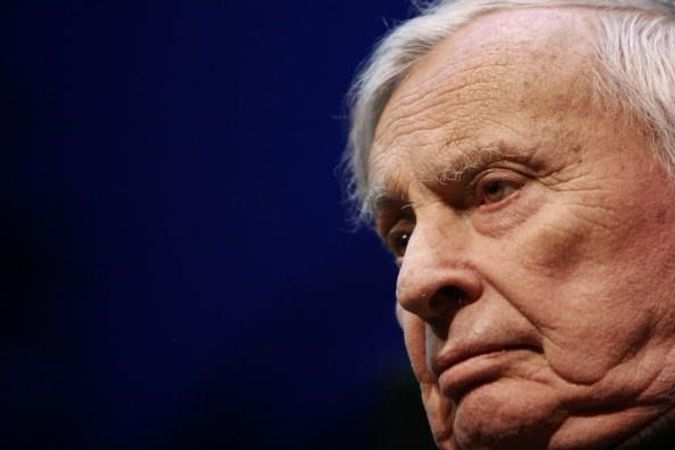 Gore Vidal was not opposed to the odd rhetorical hand grenade. “As far as I’m concerned, the only sort of pro- or crypto-Nazi I can think of is yourself,” he told William F. Buckley live on ABC in Chicago in 1968. In his intimate portrait of Vidal, “Empire of Self,” biographer Jay Parini asserts that “Nazi was a dreadful word to attach to Buckley or anyone else” and that “the debate had exceeded the usual bounds of polite discourse.”

Parini, who was Vidal’s friend of 30 years, was anointed by Vidal to write about him after Fred Kaplan’s 1999 biography displeased its subject. He agreed, on the condition that he was allowed to publish “Empire of Self” only upon Vidal’s passing in 2012. Parini interlaces his fairly standard chronological structure with vignettes from Vidal’s life to which he was a witness. The closeness between writer and subject is to the book’s benefit — it is also its crux.

Vidal would often exceed the bounds of polite discourse, and his selection of words and targets could be quite revealing. “Many Christers and some Jews don’t like poor white people very much, on the old Puritan ground that if you’re good, God will make you rich,” Vidal wrote in “Sex Is Politics,” published in Playboy in January 1979. In the same essay, he scorned “the hatred and fear of women that runs through the Old Testament (not to mention in the pages of our justly admired Jewish novelists).”

These slights were an indication of far darker things to come. In 1981, Vidal published “Some Jews & The Gays,” his fires having been stoked by an unpleasant Midge Decter essay in Commentary, “The Boys on the Beach.” A cruel anthropological study of gay men who summered on Fire Island, Decter mocks her subject while claiming to love them, painting a picture of a once beautiful community corrupted post-liberation by drugs, sadomasochism and suicide.

“Some Jews & The Gays” is at times a powerful riposte — but it is laden with anti-Semitic innuendo. “For sheer vim and vigor, ‘The Boys on the Beach’ outdoes its implicit model, The Protocols of the Elders of Zion,” Vidal wrote, starting as he meant to go on. Repeatedly referring to Jews as ‘new-class persons,’ Vidal says cheaply, “No matter how crowded and noisy a room, one can always detect the new-class person’s nasal whine.”

“Some Jews & The Gays” would not be Vidal’s last anti-Semitic controversy or his final tangle with Commentary editor Norman Podhoretz and family. In 1986, Vidal would ridiculously suggest in “Requiem for the American Empire” that it was the right time for the United States to make common cause with the Soviet Union. His concern was the rise of China and Japan — or, as he would later write, “We are going to end up as farmers for more than one billion grimly efficient Asiatics.”

The essay prompted critiques from both Podhoretz and Decter, after which Vidal countered with a piece in The Nation, “The Empire Lovers Strike Back.” He unsubtly accused Podhoretz and Decter of being un-American — part of the “Israeli Fifth Column Division” in American political life whose principal concern is getting “Treasury money for Israel” for their “never-ending wars against just about everyone.”

When Alexander Cockburn and Christopher Hitchens challenged then-Nation editor Victor Navasky about the appropriateness of publishing “The Empire Lovers Strike Back,” he merely shrugged and told them, “Well, Gore is Gore.”

In Vidal’s essays, the Podhoretzes were a symbol and a vehicle for anti-Jewish observations. They represented a new class of persons who had disrupted the existing social order — within which he saw himself as a senior figure — in the way the Jewish bourgeoisie was belittled as nouveau riche in fin-de-siècle anti-Semitic caricatures. In the eyes of “America’s biographer” (to use the title Vidal gave himself), the Podhoretzes were also disloyal, placing the needs and priorities of another country, Israel, above those of the United States.

Gore Vidal hated Israel. In 1994, Vidal wrote a foreword to Israel Shahak’s assault on Judaism and Zionism, “Jewish History, Jewish Religion: The Weight of Three Thousand Years.” Vidal explained, libelously, that American recognition of Israel in 1948 came about so swiftly because “an American Zionist” brought Harry Truman “two million dollars in cash, in a suitcase, aboard his whistle-stop campaign train.”

“The hasty invention of Israel has poisoned the political and intellectual life of the USA, Israel’s unlikely patron,” Vidal wrote in what constituted a direct attack on American Jewry. “Unlikely, because no other minority in American history has ever hijacked so much money from the American taxpayers in order to invest in a ‘homeland.’”

Parini, to his credit, mentions these adventures into Jew-hatred in “Empire of Self” — although the Shahak foreword is conveniently erased from history. The problem is Parini remains too close and too attached to his subject to take a firmer stance on his transgressions.

He asserts that Vidal in “Some Jews & the Gays” “did not sound an anti-Semitic note” — which is patently untrue. He reveals that, when drunk, Vidal “could seem terribly racist and anti-Semitic” but extends his remarks to add, “Neither of these prejudices ran deep.” Parini rightly calls “The Empire Lovers Strike Back” ‘harsh’ but then, hedging, says “to many ears it tilted in the direction of anti-Semitism.”

For the most part, Vidal’s outbursts were confined to his essays and did not corrupt his fiction. It’s difficult to disagree with Parini’s assessment that “Burr,” “Lincoln,” and “Julian” represent his best work, demonstrating his mastery of historical fiction. While Parini demurs, I would agree with Matt Tyrnauer’s assessment that “Myra Breckinridge” is a groundbreaking work. “Gore understood sexuality and sexual politics in ways never before seen — and probably not yet seen,” he told Parini.

However, in the desperately unfunny, utterly terrible 1992 novel “Live From Golgotha,” his feelings towards Jews and Israel poke uncomfortably through the narrative. One of Vidal’s so-called inventions, a hacker from the future (whose name is Marvin Wasserstein) attempts to destroy the Gospels of Jesus Christ as they’re being written in order to take control of the Christian narrative. Meanwhile, NBC goes back in time to broadcast the Crucifixion live. The novel is a mess.

The price of knowing Vidal, Christopher Hitchens wrote, “was exposure to some of his less adorable traits,” including “a very, very minor tendency to bring up the Jewish question in contexts where it didn’t quite belong.” By exploring his life in full, Parini has reminded us — even if he didn’t intend to — that this tendency wasn’t quite so minor. His biographer might not say it but I will: Gore Vidal was an anti-Semite.

Was Gore Vidal the Real Crypto-Nazi?