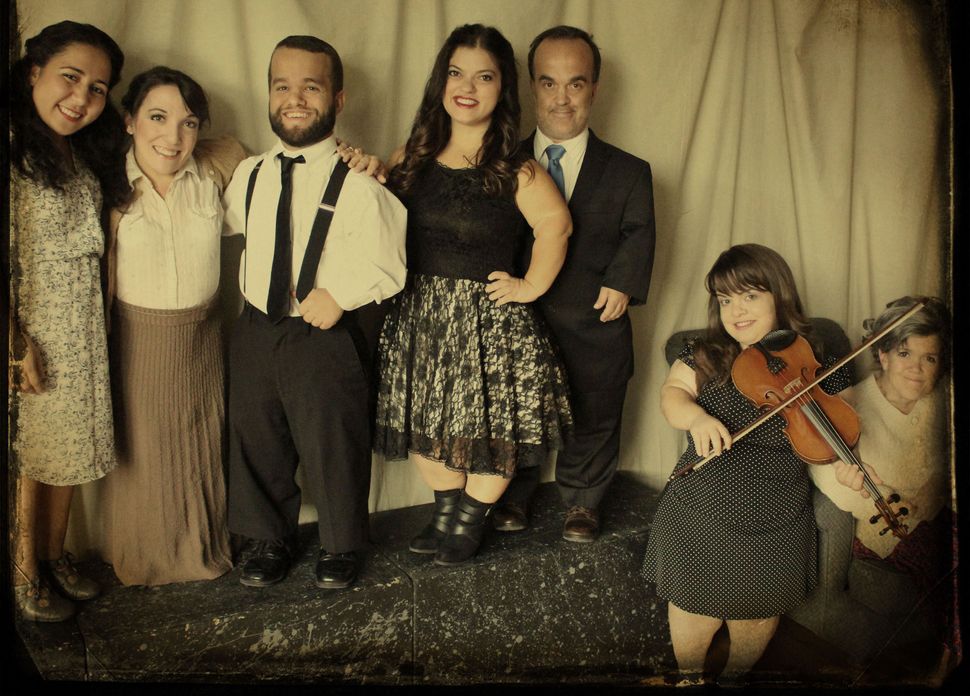 When Gaby FeBland was looking through the résumés of actors she was casting in her play, “The Lilliput Troupe,” she was astonished by what she saw.

“[These actors], for a lot of them this is the first time they’ve played individuals,” FeBland said. “You had such talented actors audition, and their résumés would just say ‘Dwarf Number 3,’ ‘Dwarf on a Barstool,’ ‘Elf,’ ‘Leprechaun.’ I can’t believe that in this day and age we’re still having little people onstage exclusively to be stared at.”

“The Lilliput Troupe” concerns the true story of the Ovitz family — seven Jewish siblings with dwarfism who survived a year in the laboratory of Josef Mengele who cruelly experimented upon them, but spared their lives because he found them to be unusual test subjects.

The play was originally performed at Northwestern University in 2014, where its playwright, FeBland, and director, Alex Benjamin, were students. Casting from the university’s student body, the two were unable to find seven little people actors to play the parts. Given the chance to perform in New York as part of the 2015 Araca Project, which helps young theater artists produce their work in a brief run off-Broadway, FeBland and Benjamin were determined to make sure their actors matched the characters they play.

“That was paradigm-shifting to find out,” FeBland said regarding Stroker, “We have an actor in a wheelchair in our play. The cast is constantly feeling like the world is never going to adapt to them, that they just have to adapt to the world, and it’s exhausting.”

Sofiya Cheyenne, who plays the youngest Ovitz, Perla, in “The Lilliput Troupe,” said: “I personally believe that the industry is changing very slowly. In New York we have [the Alliance for] Inclusion in the Arts, which advocates for people with disabilities who perform. We weren’t having those conversations before.” She also mentioned the rising prominence of Peter Dinklage, an actor with dwarfism who has gained acclaim for his work on “Game of Thrones.” “[Dinklage] just won an Emmy for the second time,” she said, “and, his whole career has been committed to making sure he didn’t give in to those roles that malign little people.”

“Listen, when this opportunity came to me and I saw that they were committed to casting seven little people performers, I was the happiest person in the world. It’s the first time I personally have performed with other little people.”

The Ovitzes were a Romanian family who, in the years before World War II, toured together as vaudeville performers. After the war, traumatized by their time in Mengele’s laboratory, they resumed their theatrical careers. They moved to Israel in 1949 and toured there for several years.

“The Lilliput Troupe” imagines the Ovitzes’s first vaudeville performance after the war — an unsettling take on “Snow White and the Seven Dwarfs.” It mixes that performance with the story of the family, from their origins in a poor village of beet farmers to their search for a home after the trauma of Auschwitz. Each Ovitz takes a turn centerstage, mimicking, darkly, the variety of a vaudeville show through song, dance, magic shows and acrobatics. These interludes give the audience a sense of each Ovitz sibling’s individual character and history.

“Even in the biographies available on them, they don’t do a great job individualizing each Ovitz,” FeBland said. She says she wanted to push back against the instinct to treat members of a marginalized group as part of a homogenous whole. While she drew on the biographical information available on the family, she said that the characters in the play “are the Ovitzes as they exist in my mind.”

While “The Lilliput Troupe” focuses on the impact the Ovitzes’s dwarfism had on their fate during the Holocaust, the specter of the horrors occurring outside the laboratory walls is always present. After Snow White first meets the dwarfs, the dwarf named Jolly goes off to bed, telling Snow, “Digging begins at 5 a.m.”

Jolly’s grim depiction of endless, futile labor is a stark reminder of the conditions faced by the Ovitzes alongside every other Jew in Auschwitz.

Near the end of the play, the only actor left onstage is Avram, the eldest sibling and the show’s master of ceremonies. Desperate to hold things together as the play unravels around him, he attempts to play all seven of Snow White’s dwarfs. His frantic performances make clear just how irreplaceable each sibling is. It also reinforces the individual importance of each character in “The Lilliput Troupe,” while reminding audiences that both the characters and the actors who play them are used to being treated as interchangeable.

“Our cast is from all over the country,” Alex Benjamin said. “Hearing them speak about the challenges that they face in the entertainment industry in the same way the Ovitzes in the play speak about it — it’s pretty fascinating to hear about how similar the struggle of the Ovitzes seems to be from the 1940s to today. Our actors comment that they don’t think that much has changed in terms of inclusion and access.”