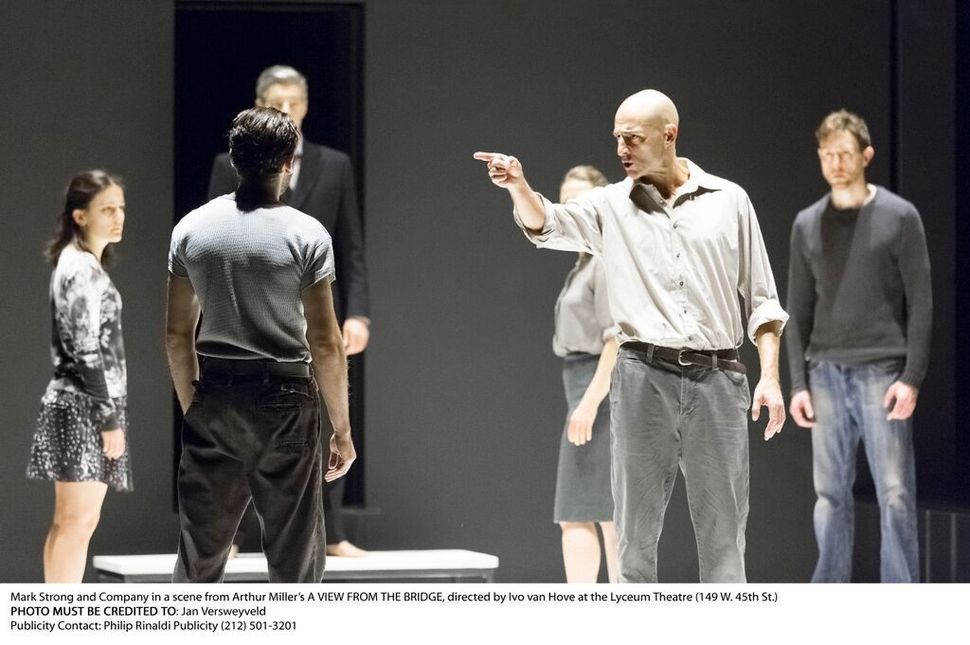 “And if I seem to tell this like a dream,” says the lawyer who serves as narrator, as the play reaches its brutal resolution, “it was that way.”

The lawyer is Alfieri, our guide through postwar Red Hook in Arthur Miller’s 1955 classic, “A View From the Bridge.” And in the production that opened last night at the Lyceum, directed by Ivo Van Hove, what proceeds isn’t merely dreamlike but in fact a nightmare, an ominous parable told in a chimerical world, in which emotions are heightened, time suspended, and dread omnipresent.

“A View From the Bridge” was last on Broadway only six years ago, starring Liev Schreiber and Scarlett Johansson, and again a dozen years before that, when it won the Tony for Best Revival. But, still, Van Hove was given us an intense, unsettling, and deeply original evening of theater. The play is always a Greek tragedy — Alfieri, that narrating lawyer, is its chorus — but by stripping of its kitchen-sink naturalism, Van Hove has made it a battle, a psychosexual faceoff in a crucible (to mix my Millers). The performances here are restrained, but the tenstion is almost unbearable. It’s chilling.

The play opens with Eddie Carbone (Mark Strong) finishing a day at the docks. He’s a longshoreman; he works hard, when there’s work, unloading ships. He gets home to his wife, Beatrice (Nicola Walker), and Bea’s orphaned niece, Katie (Phoebe Fox). Theirs is a happy family — Katie eager to get Eddie a beer as soon as he comes in — but it’s soon clear something’s a little off between Katie and Eddie, that their relationship is unusually close, or oddly stunted. Van Hove underscores this point from the play’s first moments, having Katie, a young woman, a high school graduate in a stenography school, jump into Eddie’s arms and sit on his lap like an excited little girl.

There’s news in the Carbone house that evening. First, Katie, the top student in her class, has been offered a job at a nearby plumbing supply store. She, and Bea, are excited, a chance for Katie to get on with her life. Eddie is not; he doesn’t like the neighborhood, the class of people, that she won’t finish the course, that she’ll leave his house. But this small, normal domestic dispute is soon overshadowed by a larger issue: Two “submarines,” illegal immigrants from Italy, cousins of Bea’s, are arriving that evening, and the family needs to be ready.

The two men are brothers, Marco (Michael Zegen) and Rudolpho (Russell Tovey), and they’ve been smuggled over, for a fee, on a freight ship. There’s no work in the old country, and they’ve come to New York to make money. Marco has a wife and children back home, one of them sick, so he plans to work hard, earn cash, and return. He’s silent, and strong. Rudolpho, who stands out as a blond — “a thousand years ago, they say, the Danes invaded Sicily,” he explains — is single and more care-free. He likes to sing, to cook, to tell jokes. He wants to see sights, to stay in America. Eddie is immediately skeptical. “Is that a workin’ man?,” Eddie says to Bea. “What does he do with his first money? A snappy new jacket he buys, records, a pointy pair new shoes.” But it’s when Rudolpho and Katie fall for each other that things start on their march toward catastrophe.

The Belgian Van Hove is an acclaimed avant-garde director, and this is his Broadway debut. This production was first staged a year ago at London’s Young Vic, before a transfer to the West End and several Olivier Awards. It arrives here as a coproduction of Scott Rudin and Lincoln Center Theater, a month after the 100th anniversary of Miller’s birth. (Also marking that centenary, his Incident at Vichy will open Sunday at the Signature Theatre Company.) The cast, nearly all British, is nearly all imported from the Young Vic. They speak in a sort of midatlantic midcentury Brooklynese, which, perhaps giving a subconscious benefit of the doubt, I found increased the staging’s neither-here-nor-there dreamlike quality.

Van Hove stages his “View From the Bridge” in a towering, near-white cube, a monolith, at center stage. Its walls rise as the play begins, and the action transpires in that bare, circumscribed space, almost a boxing ring. Alfieri (Michael Gould), the outside observer, is the only character to leave that box; the players are barefoot, like grapplers, when they’re inside it, though Gould wears shoes when he’s outside. There are racked rows of seats at stage left and stage right, not just a few but several rows, emphasizing that the feuding characters are gladiators in the coliseum. There is amplified underscoring throughout, droning, discomfiting, almost uncomfortable. There is no intermission — one would release the tension.

Eddie decides that Rudolpho “ain’t right,” by which he means he’s gay — the blond hair, the singing, the cooking — and only using Katie so he can stay in the country. In the last production, six years ago, Rudolpho had some obvious effeminacy. Here, he doesn’t, and the effect is to heighten the degree to which Eddie is becoming a victim of his own delusions, is grasping for ways to keep Katie from someone else. When he drunkenly kisses Rudolpho, which to his mind proves the immigrant’s homosexuality, it’s horrifying and unexpected; when, moments later, he kisses Katie, it’s more horrifying but not surprising.

Unable to break the pair apart, Eddie goes to Alfieri and then, when Alfieri points out that there’s nothing to be done, to the Immigration Bureau. He turns in his submarines, and in the process two others, hiding elsewhere in his building. In his desperation, he has violated the omertá code of the neighborhood. He is finished, if not yet literally. The gears of this tragedy grind on.

The question, of course, is why. Is it just Eddie’s fixation on his daughter-like niece? Is it a larger commentary on fathers and daughters, parents and children, the inability in letting your progeny have their own lives? Perhaps it’s a commentary on immigration: Eddie, here, established, legal, can’t acclimate to those arriving after him. Alfieri says it’s about ancient ways of settling grudges, people — as Lin-Manuel Miranda, across Times Square, can attest — seeking complete retribution. “Now we settle for half,” Alfieri says, “and I like it better.”

Settling for half is of course better, if you believe peace and stability is more important holy Truth. That’s as true in Red Hook, as it is on Capitol Hill and in Mosul. But Eddie doesn’t believe that, and it’s his undoing. And so this “View From the Bridge” ends in a bloodbath, both metaphorical and lyrics. It’s a haunting final image, in a haunted dream.