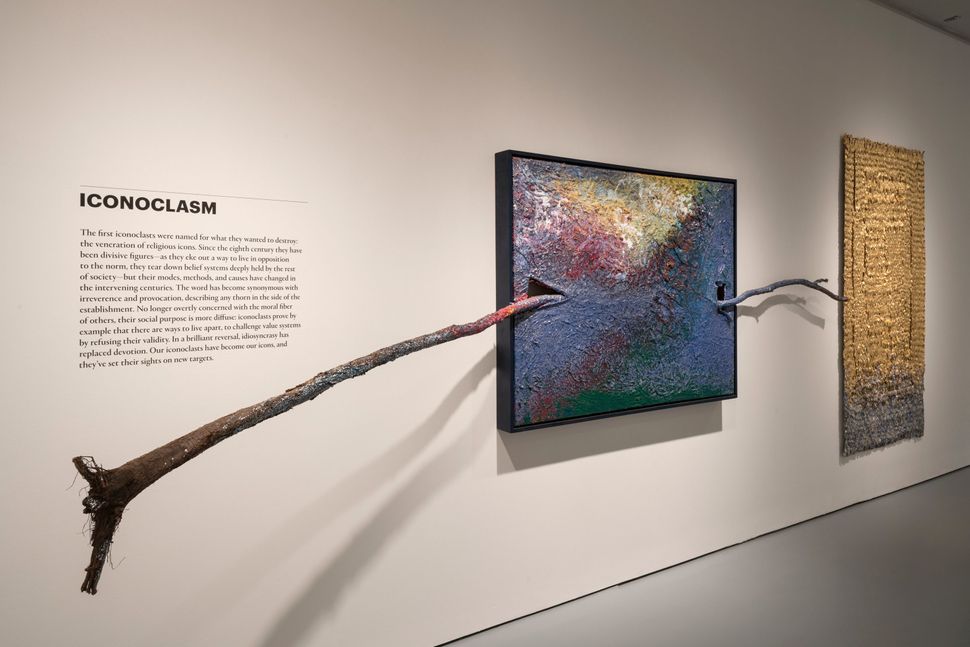 Jens Hoffmann, Daniel S. Palmer and Kelly Taxter, the curators of the Jewish Museum, have a difficult job. They can’t help but recognize the limitations of revisiting the same narrow band of Jewish tropes with each and every show they present. There are only so many fresh ways to revisit the Holocaust, the Jewish immigrant experience, the biblical stories, the Diaspora, etc., etc., etc. One imagines that they, as active, intelligent, engaged art historians, must struggle every day with the relationship between the art that most excites them and their ability (or lack thereof) to justify its Jewishness. But still, they must respect the mission of the institution to look at art through a Jewish lens.

“Unorthodox,” the group exhibition that currently sprawls across the entire main floor of the museum, could be read as a their bid to square this circle.

Most of the 55 artists represented in the show aren’t even Jewish. Rather, their roots are Christian, Muslim, Buddhist and Hindu, their outlooks entirely or mostly secular. They’re Eastern European, South African, Japanese, Brazilian, Cambodian. They’re from Russia and Columbia and Sweden and Turkey and Newark, N.J., and Seattle, Wash., and (but of course) the united colors of Brooklyn. They’re painters, potters, sculptors, video artists. They work with textiles, found objects, collage and sound. Some of them are well-known in the art world. Some are, in the parlance, newbies. Others, like the Mexico-cum-Detroit-based-Briton Stephen Goodfellow — who told the curators he was “amazed you managed to dig me up; you must have been talking to the wrong people” — have been working in obscurity for a long, long time. A few of them — novelist William T. Vollmann, deejay Brian DeGraw, skateboarder Tony Cox — have achieved a high level of cultural prominence for something other than the art on display. Some of them are old. Some are dead. One of them, printmaker and persona manipulator Bunny Rogers, was — whoa! — born in 1990. They take as their subjects, among other things, sexual identity, ethnic and tribal identity, global capitalism, colonialism, consumerism, partisan politics, personal politics, means of production and means of distribution — the list goes on and on.

All of which is to say the art and artists on display in the show have been drawn from all over every conceivable kind of map.

What they share is an attitude, a kind of refusal of, a disinterest in or sometimes a contemptuous fascination with, the systems of commodification and signification and, if you will, social practice. They all refuse, to the best of their abilities — because who in this world stands entirely apart? — the bullshit that constitutes most of the art scene. They are, as the show’s introductory wall text puts it, “mavericks, rebels, iconoclasts [and] misfits.”

This wall text is crucial to the show’s ambitions. Like much of the art on display, “Unorthodox” relies heavily on the context it imposes on the work to create its unifying meaning. One might call it conceptual curating.

To this end, the curators have staged 14 wall placards around the exhibition space, each of which contains a word — “Gaze,” for instance, or “Lies” — and a short disquisition on the word’s possible relevance to the art. At first one thinks that these words relate directly to the work in their immediate vicinity. One begins to ask directed questions of the art. How, to take the example of “Gaze,” does a cannon-shaped object not far from the placard, made from scavenged bicycle wheels, missile casings and pressure valves by the Kenyan artist Cyrus Kabiru, embody or critique or in any other way evoke the gendered concepts that have accumulated around the notion of the gaze? Well, it doesn’t. But it does evoke a kind of brash response to the way garbage multiplies in the poorer regions of the world, and the way it becomes the substance of life for the poorest people living in these places. It forces one to, yes, gaze at that which society discards — a different kind of gazing, complicating the assumptions one began with. Eventually one realizes that these texts do not directly relate to any grouping of artists but hover at the edges of the exhibit as a whole. And then, the value of having asked the off-kilter questions of works that might not easily answer them becomes all the more surprising.

The question remains, though, what all this has to do with Judaism.

The show’s introductory wall text states that “ ‘Unorthodox’ is related to a long legacy of progressive Jewish thought, in particular the Jewish tradition of dialogue, debate and critique. Art, after all, can be a brilliant means to probe previously unquestioned truths, and to allow unorthodox concepts to infiltrate orthodox systems.”

By framing the work dialectically, floating ideas and offering lenses through which to interpret both the individual artists’ projects and their sometimes discordant, sometimes antagonistic, sometimes nonexistent relationships with one another, the curators tease a multitude of conversations out of the work, challenging and complicating our understanding of what art can do and be now, in ways that any one of the pieces on display, if seen in isolation, would not.

Jewish culture has a tendency — one that, in recent years, has begun to seem like a mandate — to tell itself the same stories over and over until they become, to extend the central metaphor of this exhibition, orthodoxy, overly familiar and sealed off from the ever-evolving world around it — until we, as a people, become sealed off, arguing with one another in a vacuum. This can lead to a reactionary blindness, a clannish refusal to see our own interests as interdependent with those of the many other peoples with whom we coexist. The only way out is to stop asking — or to stop only asking — “Yes, but is it good for the Jews?” To separate the dogma, the bromides, the self-serving myths from the great gifts Judaism gives us: the Talmudic tradition of argumentative discourse, the ethical seriousness of tikkun olam, the wisdom that rises from living precariously at the margins of society.

Though the curators have carefully avoided presenting any work that might imply a partisan stance on the big divisive issues currently being debated in the Jewish community — Zionism and the rise of Israeli nationalism, the growing influence of the ultra-Orthodox — the secular humanism that underpins “Unorthodox” still feels like a rebuke and a challenge to the current trends in Jewish thought. Rather than institutionalizing a fetishized Jewish identity, they’ve set out to bring a Jewish sensibility to the practice of engaging with the larger world. It’s refreshing to see an institution as prominent as the Jewish Museum attempt to push the conversation in this direction, beyond mere Judaism, toward a pluralistic re-engagement.

“Unorthodox” runs at the Jewish Museum through March 27.