Netflix’s ‘W/Bob and David’ is Half Jewish, All Haimish 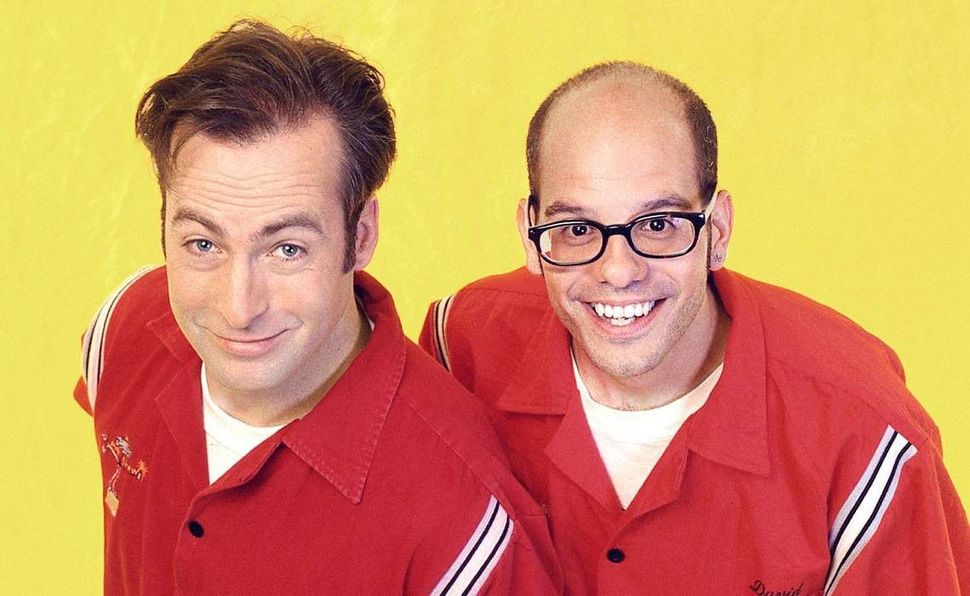 When you see a Jewish Pope hawking Prilosec on an ATV by screaming obscenities at the one-too-many Kosher Turkey “Oysters” he ate, it’s safe to assume one of two things. Either:

1) You’re paying for all those brownies you ate at that Sublime concert 20 years ago.
2) Some iteration of “Mr. Show With Bob and David” has miraculously, nay, gloriously arisen.

Hint: it’s the second one.

Though the classic show’s bite has been slightly dulled with age and fame, the Netflix produced “W/ Bob and David,” released Friday the 13th of November (and overshadowed by the horror of the Paris attacks) might offer some silly release from the ongoing heaviness.

I loved “Mr. Show” because it encouraged me to challenge authority, both religious and political. It was something of an addendum to a good reform Jewish education. To be sure, the comedy team of Bob Odenkirk and David Cross is only half Jewish (or all Jewish, if you count Odenkirk playing a fake Jewish lawyer on Breaking Bad). But they do represent a particular strain of Generation X Jewish comedy.

In fact, there are two particular types of Jewy Gen-X comedy that Netflix, in a span of just four months, has managed to revive. The first strand, more Jewish, per se, belongs to the zany universe of David Wain. “Wet Hot American Summer: First Day of Camp,” released this past July, is a world of BBYO and other Jewish teen organizations for the in-crowd or the hopelessly nerdy out-crowd that still showed up, dressed in pleated Dockers by their mothers, to many a Matzoh Ball dance.

David Cross, along with Sarah Silverman, Jack Black (and son on), represent that other strand, more in line with the kids who would rather have “taken a trip up your mother’s a——” than go to a Hanukkah Winter formal.

I think David Cross’s somewhat famous meta-tattoo of a male pig tattooed with a Kosher symbol, offering up a platter of barbecued ribs (his own), pretty much captures the relationship between “Mr. Show” and any religious and/or cultural tradition. It’s a big “Eff You!’ served with a heaping ‘s——t-eating grin!”

This brand of comedy is a wacky goof-fest where nothing sacrosanct can or should survive. I identified much more with this attitude — though I was quite a bit shyer.

Though the new iteration of “W/ Bob and David” still has this spirit of their salad days, the aggressive energy has mellowed. Many of the institutional takedowns that made the 90’s “Mr. Show” the television equivalent of Catskill comic raised by Emma Goldman and Mel Brooks, have fallen by the wayside.

Instead, the Netflix show leans more toward another of Bob and David’s specialties: brilliant fake schmaltz. Some examples: a movie trailer about the origin of the famous “Einstein-with-his-tongue-out” poster; a “Reservoir Dogs” meets Willy Loman piece about a door-to-door Qu’ran salesmen in the Midwest; a reality cooking show that has contestants trying to win over judges by one-upping their personal tragedies; a re-imagining Alex Haley’s “Roots,” in which the slaves are called ‘helpers’ and rewarded with cash and free hugs.

More current and contentious sketches do make the cut, and are very well written and executed — picture ISIS or Al Qaeda taking over Hollywood, or Hitler showing up in heaven because God “loves all his children equally.” But even those are a little too polished at times.

My personal favorite is a wacky commercial for “Herschel’s Goyish Jewish Delicacies,” purveyor of various treyf food and Christian icons (think Jesus statue) made of reconstituted, gelled kosher Turkey. The sketch is pretty emblematic of the new show.

Will “W/ Bob and David” have you rolling on the floor? Probably not.

Will it give you a satisfying taste of something you’ve been craving, but can’t really place? You bet.

Netflix’s ‘W/Bob and David’ is Half Jewish, All Haimish