The Sorrow and Pity of Arthur Miller’s ‘Incident at Vichy’ 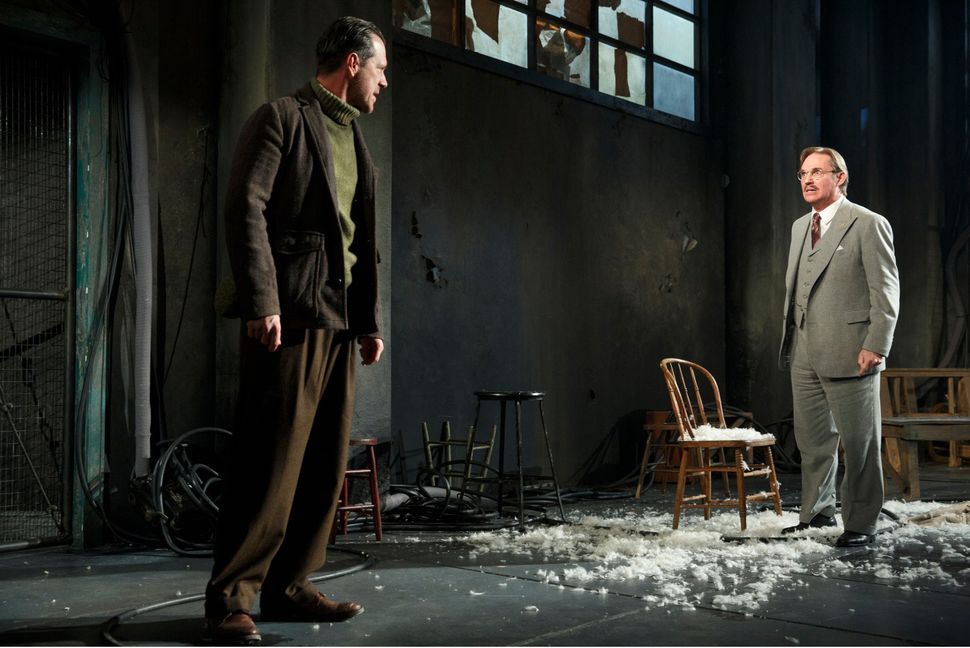 The trouble with a play like Arthur Miller’s “An Incident at Vichy” is the ubiquitous presence of Holocaust narratives in contemporary films and books. Recently, on NPR’s “Fresh Air” Terry Gross said of the movie “Son of Saul,” “At this point, I don’t want to go to a theater to watch such unbearable suffering unless it adds to my understanding of the Holocaust or is an exceptionally well-made film.” The talky, fast-moving production of Miller’s 1964 play at the Signature Theater in Manhattan, seems to be just the sort of production that Gross is talking about. It will inject you with a high dose of dramatic adrenaline, and make a great feast of ideas for your après-theater discussion: circumcision, collaborationism and the class struggle are just a few of the topics that Miller considers.

Miller’s groundbreaking work was produced six years before Marcel Ophuls’s masterful and definitive treatment of French collaboration with the Nazis in the documentary “The Sorrow and the Pity.” In his play, Miller makes a point of interrogating how French soldiers detained Jews and sent them to concentration camps with minimal to no coercion by the Nazi occupiers. One of the characters, Von Berg, an Austrian nobleman, notes that “if I did not know that some of them in there were French, I’d have said they laugh like Germans.”

The play opens with a group of men in a large, grimy room. where the men are waiting to be told why the French soldiers have detained them.

The histrionic Monceau, (played touchingly by Evan Zes), cannot believe that the German people who seemed to appreciate art and culture more than any other European nation could be capable of such barbarism. Lebeau, a Bohemian artist played by Jonny Orsini (who looks and acts as if he has just stepped off an indie screen, missing only a spliff and some existential angst about First World problems), is the first of all the characters to suggest that the detentions have a “racial… implication.” He asks Bayard, an electrician, “Listen, you are… Peruvian, aren’t you?” The use of the euphemism “Peruvian” for Jew suggests that the play will be absurdist, yet this is a work by Arthur Miller, so the events portrayed in it might seem absurd, but the drama is all too real.

Lebeau has been examined by the police as if he were a race horse; his nose, ears and mouth are measured by Professor Hoffman, played by the plucky Bryan Cross, whose sweet, blond, German-schoolboy contrast sharply with his role as racial anthropologist.

The disdainful businessman, Marchand (played by John Procaccino), is the most accommodating of the cohort: He will not admit that he is a Jew; he believes that his socioeconomic status will get him out of any unpleasant situation. And he, like the men who have detained him, has developed his own sort of racial profiling — he is certain that the Gypsy, who has been arrested with the other characters, is a thief. “They’ll steal the eyes out of your head,” he says at one point.

Leduc (played by the dashing Darren Pettie), carries the show. A valiant French soldier, he psychoanalyzes his fellow detainees and is the only character who incites the others to reject victimization and run away. Still, he admits to being unwilling to sacrifice his life for any of the other prisoners. Later in the play Leduc says that Jews are perpetrators as much as they are victims: “Each man has his Jew: it is the other. And the Jews have their Jews.” And lest we think that Miller excludes Americans from his moralizing about collective guilt, Monceau notes that “every nation has condemned somebody because of his race, including the Americans and what they do to Negroes.”

Two of the characters, it appears, have been taken by mistake (or have they?) The blue-blooded, Austrian aristocrat Von Berg (played by Richard Thomas) suggests that he was arrested because he wasn’t sufficiently vulgar for the Nazis. Possibly Von Berg has been arrested for homosexuality. He notes that he has trouble relating to women, and seems to have been in love with a Jewish musician he had been hiding in his castle in Austria.

At the risk of giving away the ending, let me say that Von Berg is the last of the just; while totalitarianism breeds great inhumanity in many while giving rise to great humility in some. It is perhaps fitting that Miller makes a hero not out of his Jewish characters but out of his Viennese prinz. The play’s universalist message remains as relevant as ever — Miller suggests that heroes, victims, and oppressors can be found in members of all nationalities.

The Sorrow and Pity of Arthur Miller’s ‘Incident at Vichy’