Caught Between the Yeshiva and the Deep Blue Sea 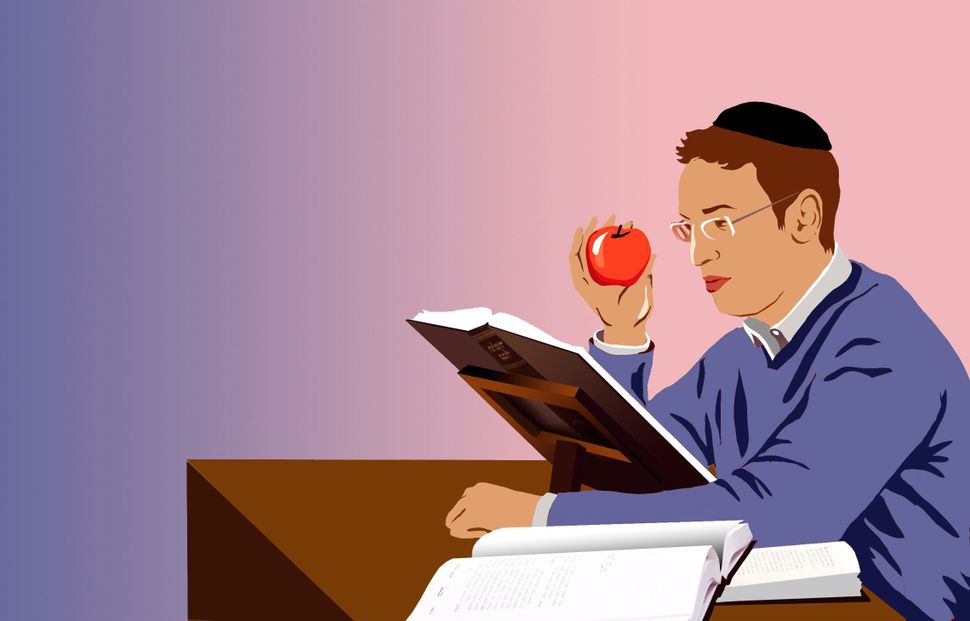 When I was in yeshiva, there was a man who had been in beit medrash every day since 1953. Yes, every day in the afternoon he came to study the holy books, without fail. He had started as a young boy, and by the time I was 20, he was in his 50s. He had a long blond beard and wore a Lithuanian caftan even during the week. He was the closest thing to a Jewish Lou Gehrig I had ever known.

He was not part of the staff of the yeshiva, but he was a fixture. Everyone knew that if there was a question, you went to him: “Does it say anywhere that you have to wear a different pair of shoes for Shabbos?” “No, there’s no mention of such a thing anywhere.” And you knew he knew because he had been, with his perfect mind, everywhere in the Talmud and the shulkhan arukh, the Jewish code of law.

Like many young people in my culture, I grew up with a militant certainty, and I looked up to men like him as if he were a mini-god or perhaps even a representative of God. To not change, to not waver, to study with “iron pants” and to match it with piety and simplicity — he drove a 1960 Plymouth Fury, even though it was 1979 — was a form of greatness that was a torchlight we carried in our minds.

If it was a doubt, then it was most certainly a doubt about love. I tremble as I write this admission all these years later, but even in the male bastion of the bais medrash I felt the presence of women, which is to say I felt their absence, which is to say that I felt the absence of their love. In fact, I desperately wanted their love, though I had never received it and deeply doubted that I ever would.

Well, of course, I hadn’t been loved. It was not part of the culture of my world. But in some of us the biology boiled up; the sap rose high into the tree, sending us into a fever. I was no heretic, though. They say that God has no corporeality — and I accepted that, but I wondered if I had any. How could I be sure if I were never touched in love by a woman?

My crisis at that age was not the more common modern dilemma — say, whether God exists; of that I had little doubt. In fact, I was a grateful believer who lived in a God-ordered universe. The Holy One created the world in six days. He made the heavens and the earth, the flowers, the grass and the trees. The insects, the crawling things, the wild beasts, male and female He created them. Man was His crowning glory, but we disappointed Him. Noah was all right, Abraham was better, but God had no friend until Moses, who was a piece of God Himself. It was a coherent, incoherent world. We were to fear Him, to rejoice in His word. Above all, we were to not stray after our hearts and our eyes. Like Adam, we were not to eat of the Tree of Knowledge.

But like Adam, I couldn’t help it. I didn’t want to close the holy books, I had no beef with the God of Israel, but I knew that I had to close His books a little if I were going to write my own.

Not far from where I lived at the time was a redheaded girl my age, with tiny spaces between her teeth. Even though she was an observant Jew like I was, she represented a different world to me. She was more modern and less burdened by rabbinic ghosts and the pious dybbuks of Eastern Europe. She wore jeans and represented a world of American possibility, the glories of physical fitness — an injection of Greek body consciousness to my potato-kugel physiognomy. How could I make contact with her? She did not know me. I daydreamed and night-dreamed about her; how would I reach her? When the desire is strong, one finds a way … I got hold of her number.

“Would you like to go out with me on Saturday night?” I asked her.

“I would love to.” And that was more or less it. By golly, I did it. I had a date. Finally, I had made contact with someone — a freckle-faced form of the female gender.

She was to my mind, breathtaking. She had the clear golden-brown complexion of mid-morning in a redwood forest. We made up to go somewhere, I don’t remember where — perhaps it was to a movie. I was very excited, too much so.

We got along on the date all right.

“Yes, either Thursday or Sunday. Call me.”

I should have called her, but instead I sent her a telegram. “This telegram entitles the bearer to one ticket to an Italian film,” it read.

Why a telegram, when a call would have been good enough? I realize now that it was more than a date I was after. It was a casting call for my excess.

I got no response. When I saw her in the street a few days later, she brought it up hesitantly — as though she had the unpleasant duty of telling me that there was something dripping from my nose. “I found it weird,” she said simply. I stammered and slunk away.

Brooding about it in the way of young men, I foolishly decided to ask her out again after some time had passed. A few weeks later when I saw her in the street, she somehow caught scent of the heatedness of my pursuit. It hardened her: “This might hurt your feelings,” she said, “but I think you like me more than I like you.”

Oy, did those words ever sting! They still sting. My id, my appetite to be seen, had exploded undesirably in her face. I was left now with the dirty joke of myself. Of course, like many young men, I took her rejection as final verdict on my existence.

It was worse than a rejection, in fact. I felt that I was being sent back to solitary by the God of the bais medrash who was using her as an agent.

Beaten, I would go back to the holy books, my one and only true friends, which welcomed my excesses — but it was no longer the same. Whereas once I had looked up to my Lou Gehrig with the Gran Fury, I now saw him as the very person I did not want to emulate. What a life — to deny one’s appetites, to live in intolerable frustration, to drive a 1960 Plymouth Gran Fury in 1979? That wasn’t going to be me — or so I thought. Still, every now and again I would glance at him and think, “Why not?” It wasn’t a bad life among the Talmud and its rivers of commentaries. And so I tried to be still, but I couldn’t be. I couldn’t. There was restlessness in me that couldn’t be quieted.

I did end up seeing the movie I had planned to take my redheaded girl to see — alone, of course. I hadn’t remembered it all; then, just now, unbidden, the name of it comes back to me after these decades: “Night of the Shooting Stars.” It was an artsy movie of its time.

Through the years, I had forgotten about the movie and the story it told. But just now when it came back to me, I checked Wikipedia: Set in Tuscany in the waning days of World War II, the film follows several inhabitants of an Italian village who must make a decision. The Germans plan to blow up the town, but an officer promises them safety if they congregate in the town church. Approximately half of the town decides to stay and place their trust in the church and the word of the German officer. The rest of the town goes out to seek the Americans, who are rumored to be nearby, liberating towns as they advance toward Berlin

I was struck by how much relevance this had to my predicament at the time.

Just like the villagers in “Night of the Shooting Stars,” I too had a choice. I split the difference: To this day, one half of me stays in the bais medrash with my friend Lou Gehrig, and the other half of me goes out to seek out the Americans who are nearby and have come to liberate me.

Simon Yisrael Feuerman is a psychotherapist and director of the New Center for Advanced Psychotherapy Studies.

Caught Between the Yeshiva and the Deep Blue Sea