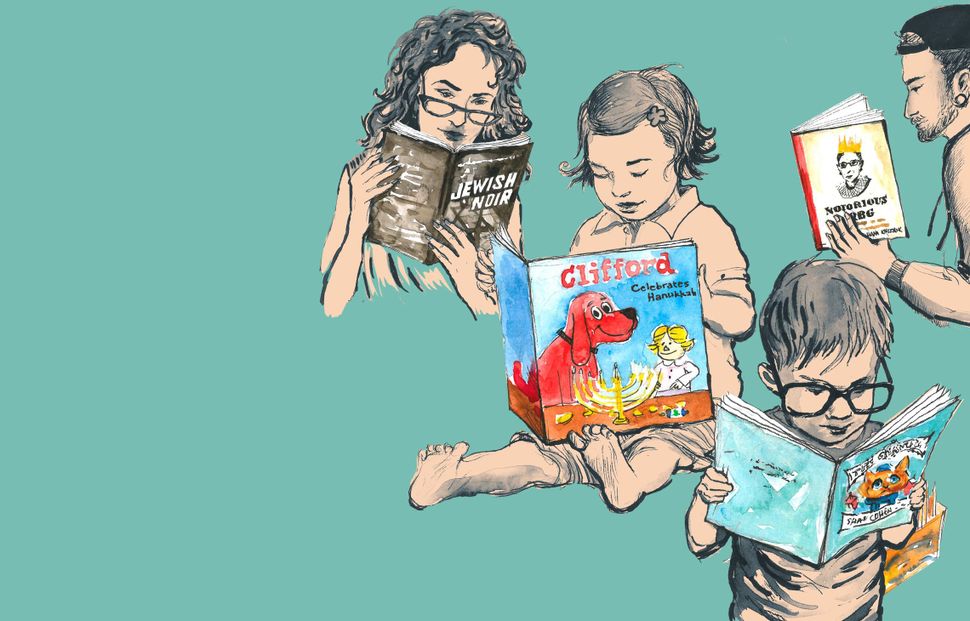 The holidays are, among many other things, a time for reading and a time for schmaltz. The two, combined, give you a sentiment expressed by the beloved writer Neil Gaiman — whose books, by the way, make for excellent sit-down-and-read-it-in-a-night-as-the-snow-falls-outside fare — when he once said, “A book is a dream that you hold in your hand.” Hopefully you’ll find the following book suggestions, one for children and one for adults for each of Hanukkah’s eight nights, prove him right.

Hanukkah is just beginning, and no one’s quite in the spirit yet. Some of us are still longing for other holidays, like the title character in written by Amanda Peet and Andrea Troyer and illustrated by Christine Davenier. This children’s book follows the titular character, a young Jewish girl whose love for Christmas causes some holiday havoc. It’s a must-have for any child who longs for sparkling lights and eggnog.

For adults who are also not yet Hanukkah-drunk, try “Jewish Noir: Contemporary Tales of Crime and Other Dark Deeds,” an anthology of short stories edited by Kenneth Wishnia. ”Noir” doesn’t quite fit the holiday spirit for many of us, but it can be an alluring match for gray winter days.

Still easing into the holiday, but getting slowly more excited? Check out Jessie Ethel Sampter’s “Around the Year in Rhymes for the Jewish Child.” Sampter’s sweet tome was originally published in 1920. In early November, after spending years out of print, it was reissued, original flaws and all. In my internal holiday world — which is an extended Jewish version of “The Nutcracker” (picture: instead of a pirouetting nutcracker, a pirouetting Mensch on a Bench) — every winter evening ends with children falling asleep, fireside, to the sound of their parents reading these gentle rhymes.

For the adult who secretly yearns for a childlike holiday joy, try “Shalom Coloring: Jewish Designs for Contemplation and Calm,” drawn by Freddie Levin and Judy Dick. The swirling patterns of Hebrew letters a nd traditional Jewish symbols are guaranteed to make the time fly during the endless wait for the latkes to be ready.

If you are not, at this point, Hanukkah-mad, you’re in need of real inspiration! And what could fit the bill better than the aforementioned “The Mensch on a Bench.” Written by Neal Hoffman and illustrated by Necdet Yilmaz, it remains a favorite. Extra incentive: the forthcoming “Mensch on a Bench” TV special, which will make James Franco’s bar mitzvah guest into a multimedia experience. Best enjoyed while munching on Mensch Munch Milk Chocolate, yet another branch of the plush doll’s growing empire.

On the other hand, if you’ve achieved full rip-roaring holiday spirit and are ready to spend a full day with a book, try B.A. Shapiro’s “The Muralist.” This mystery centers on the disappearance of artist Alizée Benoit in New York City in 1940, and on her great-niece’s investigation of that disappearance 70 years later. Shapiro’s 2012 novel, “The Art Forger,” won over reviewers with its convincing, detailed exploration of the contemporary art scene.

Halfway through the holiday, it’s time to celebrate Jewish heroes: For kids, also on the hero front, there’s the first issue of “Emek Kosher Comics: By & for Jewish Children.” When Rae Shagalov, a librarian at Emek Hebrew Academy Teichman Family Torah Center, noticed there were almost no Jewish comics for kids available on Amazon, students at Emek created the book. The adventures of Super Rabbi will awe and inspire — and especially so, since the book was created entirely by children of the same age as those who’ll read it!

And speaking of heroes, there’s also Ruth Bader Ginsburg. “Notorious RBG” is Irin Carmon and Shana Khizhnik’s ode to everyone’s favorite Supreme Court justice and general badass. The book is based on a Tumblr of the same name, started by Khizhnik to celebrate Ginsburg in 2013. The website went viral, and both it and Ginsburg gained legions of millennial fans. “Notorious RBG” the book is half adoring tribute, half serious investigation of Ginsburg’s legacy as a strong voice of dissent, during both her tenure on the Supreme Court and the career path that took her there.

“The Chanu-Cat” by Shari Cohen and Marcelo Gindlin, a cantor, with illustrations by Juan Pablo Vega, gives children a chance to appreciate what a gift the holiday is. It tells the story of both a town that’s lost its Hanukkah spirit and the cat that helps bring it back. Features a blurb from none other than Jerry Lewis: “A perfect blend of wit and charm. Two claws up. Chanu-Cat is a real mensch.”

For adults, there’s Karine Tuil’s “The Age of Reinvention,” which is appearing in English after being translated from the original French. A finalist for the Prix Goncourt, the New York-based novel revolves around the identity of its protagonist, Sam Tahar, and is told through breakneck, stream-of-consciousness prose.

“Farmer Kobi’s Hanukkah Match” by Rabbi Ron Isaacs and Karen Rostoker-Gruber, illustrated by C.B. Decker, tells the story of a chaotic Hanukkah dinner hosted by the titular Kobi and the many farmyard animals that constitute his friends. While Kobi tries to woo his perfect match, you’ll root for him to find someone who’ll love every part of him — including his tendency to keep his animals in the house.

Meanwhile, Carrie Brownstein’s “Hunger Makes Me a Modern Girl” can help guide you toward 2016 with flare Brownstein, writer and star of the comedy series “Portlandia” and founder of rock band Sleater-Kinney, is about as cool they come. Brownstein’s comic chops and lyricism shine through in her memoir.

For your last Hanukkah celebration before the final day and night, there’s “Clifford Celebrates Hanukkah,” by Norman Bridwell. The favorite big red dog of every child helps his owner, Emily Elizabeth, celebrate the holiday, only to find that one of the lights has gone out on the giant menorah in town. There’s plenty of latkes and sufganiyot, but that won’t stop the townsfolk from doing everything they can to save the holiday!

For grown-ups, there’s “The Poetry of Yehuda Amichai,” a new collection of the great Israeli poet’s work translated by Robert Alter. His work takes a serious look at many different aspects of the human experience, all against the backdrop of Israel and its conflict-ridden past. This is a book to be savored, and it will help lend light and meaning to the post-holiday days to come.

Leave your children with a sense of purpose at the close of Hanukkah with “Avi the Ambulance Goes to School” by Claudia Carlson. Based on the work of Magen David Adom, Israel’s ambulance, blood services and disaster relief organization, this colorful book provides children with an introduction to what it means to do a mitzvah. It’s the first in a series, so it has the added bonus of being the start of what could become a Hanukkah gift tradition.

And as the holiday comes to a close, you might want to pick up “Gratitude,” a collection of four essays written by Oliver Sacks in the final months of his life. Sacks writes, at the end of “My Own Life” — the second essay in the book, as he contemplates his cancer diagnosis — “my predominant feeling is one of gratitude. I have loved and been loved; I have been given much and I have given something in return.”