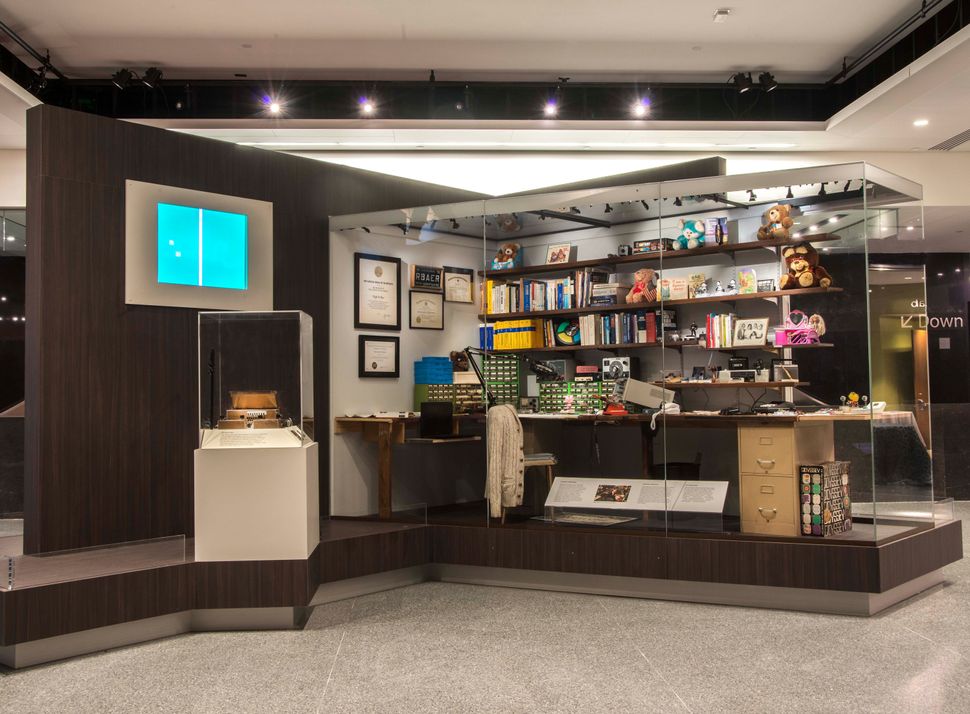 Genius at Work: The workshop of Ralph Baer has been re-created at the Smithsonian's National Museum of American History in Washington, D.C. Image by Menachem Wecker 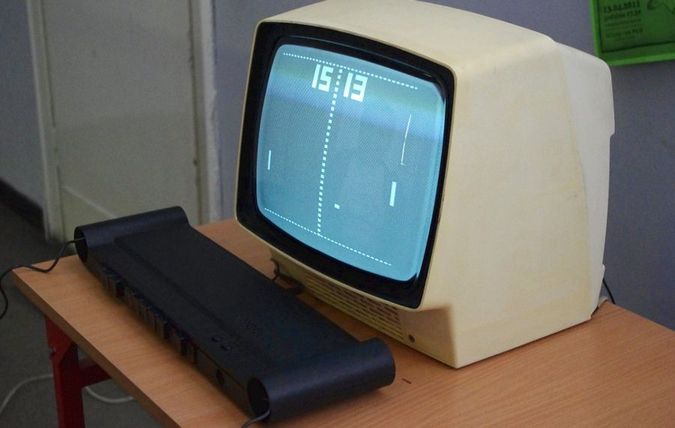 Jewish inventor Ralph H. Baer’s workshop desk isn’t exactly messy, but the 180 items on it represent the sort of organized chaos that cliché prescribes for brilliant minds. On a shelf sits his 1978 invention Simon, the iconic game with red, yellow, blue and green buttons that calls upon players to follow increasingly difficult sound sequences. Tucked between books such as “Reference Data for Radio Engineers,” “The 1994 American International Toy Fair” and “Manual of Active Filter Design” are an eraser that states “I Never Make Big Mistakes,” several Batman toys and half a dozen Teddy bears. A Barbie doll leans back in her pink chair in front of a heart-shaped mirror.

And then there are the framed documents, including a 2004 National Medal of Technology and Innovation presented by President George W. Bush to Baer for “his groundbreaking and pioneering creation, development, and commercialization of interactive video games” and a 2010 certificate of induction into the National Inventors Hall of Fame. Baer’s New Hampshire license plate (RBAER) hangs alongside certificates from the state and from the Institute of Electrical and Electronics Engineers.

Such is the clutter in the re-creation of the workshop of Baer (1922-2014), known as the “father of videogames,” at the Smithsonian’s National Museum of American History in Washington, D.C., that one might easily miss another accessory, which sits on the desk among “1,001 Technical and Scientific Abbreviations” (1963), a white corded phone and the sort of magnifying visor used by jewelers and watchmakers.

At first, the ruler with alternating pink and green squares, colored blue along one of its long sides, seems much less significant than the other props. But upon further inspection, the holographic ruler contains Hebrew letters in 33 of its 34 squares. (Inquiring minds will want to know that it includes letters separately with and without dagesh, sofit letters, and somewhat mysteriously, leaves off the taf sans dagesh and instead includes two unexpected final letters.)

That the Jewish inventor of both Pong — the video game modeled on table tennis, which is installed on a wall beside the workshop — and multiplayer, multiprogram video game systems (his “Brown Box” is also displayed nearby) had a ruler with the Hebrew alphabet on his desk isn’t altogether a surprise. Wall text notes that Baer and his family fled Germany in 1938 to New York “to escape persecution of Jews by the Nazis.” 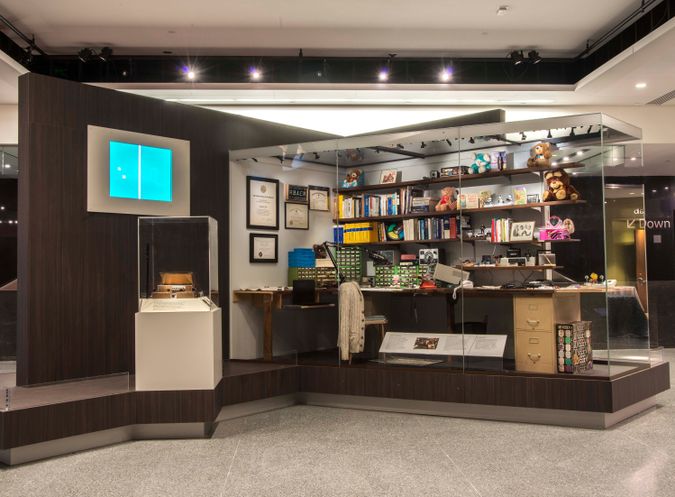 Genius at Work: The workshop of Ralph Baer has been re-created at the Smithsonian's National Museum of American History in Washington, D.C. Image by Menachem Wecker

When the inventor died in 2014, obituaries noted the fact. “Ralph Henry Baer was born on March 8, 1922, into a Jewish family in Pirmasens, Germany, where his father worked in a shoe factory. His family emigrated to New York in 1938 to escape Hitler and settled in the Bronx,” states a December 7, 2014, obituary in the New York Times. “Within a week, Mr. Baer, then 16, was working from 8 a.m. to 6 p.m. in a factory that made leather cases for manicure kits. He soon invented a machine to speed the process by stitching five or six at once.”

A biography on the museum’s website adds that the year of Baer’s birth, 1922, in Germany was “a dangerous time and place for Jewish children and their families,” and so “Baer faced increasing anti-Semitism growing up. The Nuremberg Laws — a series of highly repressive measures passed in 1935 that deprived German Jews of political and social freedom — forced him to leave school at age thirteen, though he pursued his studies on his own.”

The biography adds that unlike so many at the time, the Baers were “fortunate to have the means to escape Germany for America months before Kristallnacht — the Night of Broken Glass — in 1938.” The biography goes on at some length further explaining the violence that erupted in Germany at the time, noting that most of Baer’s mother’s family had immigrated to the United States in 1895, so they had “plenty of relatives who were willing to sponsor Ralph Baer and his family, a key immigration law requirement in America at that time.”

“As a young immigrant,” the bio states, “Baer had the freedom to choose his own future.”

No word, however, on the mysterious Hebrew ruler, and that’s where the trail goes cold.

A museum spokesperson initially sought clarification from the workshop’s curator , but returned with news that he had no further information on the ruler. She offered to pass an interview request along to the Baer family, but no response was forthcoming.

Rabbi Beth Davidson, of Temple Adath Yeshurun (Reform) in Manchester, N.H., confirmed that Baer, who lived and worked in New Hampshire for many years, had been a congregant at her synagogue, but she was uncomfortable talking more about him without the Baer family’s permission. “Until I hear that they have signed off, I don’t feel comfortable answering your questions,” she said.

Online sleuthing, as well as extensive searches in scholarly journals and in news articles, yielded no references to any anecdotes about Baer and a Hebrew ruler.

The ruler, coupled with the historical labels discussing the Holocaust, provides food for thought about the degree to which a Jewish identity may have shaped Baer’s life and work. There may be no way to find out the exact contours of that recipe until and unless the family is willing to share further context.

But as viewers leave the Baer workshop and walk back out of the museum, they pass another thought-provoking display just around the corner: a 10 Commandments with Hebrew inscriptions, as well as a crown and priestly hands, which come from a late 19th century or early 20th-century adornment from a Philadelphia synagogue ark. There may be plenty of unknowable things about the American Jewish experience, but there’s also no better way to pique the interest of young scholars who might choose to tackle the questions than to display physical objects such as the ruler and the ark in institutions such as the Smithsonian.

Menachem Wecker is a freelance reporter based in Washington, D.C. He is a co-author of “Consider No Evil: Two Faith Traditions and the Problem of Academic Freedom in Religious Higher Education” (Cascade Books, 2014).