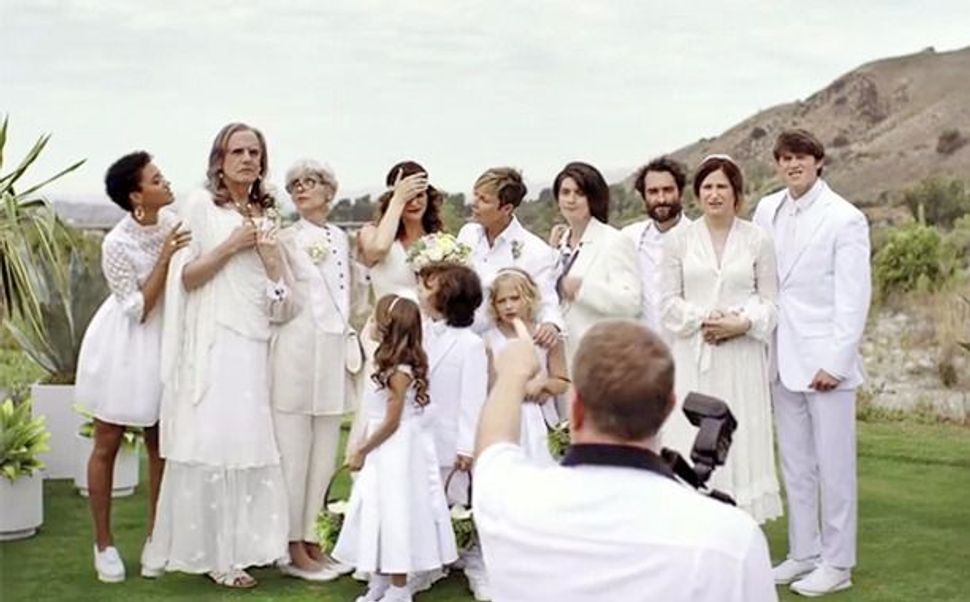 When we last left “Transparent’”s Pfefferman clan, they were scavenging the leftovers – chopped liver, coleslaw and maybe some whitefish salad– after a shiva. Now, at the start of the show’s second season — the first episode of which aired early on Amazon this week — we rejoin them at a wedding.

The two events, as far as the Jewish mystics were concerned, are connected; the breaking of the glass and the rending of garments; the joining of two separated souls and the return of a soul to its origin. In some traditions, the bride wears a garment that will one day be her shroud.

“Transparent”’s greatest strength lies in its ability to balance and cycle through joy and sorrow; it’s a testament to the brilliance of Jill Soloway and her writers. Though, this is no secret for acolytes of the first season of this groundbreaking show which follows Maura Pfefferman (Jeffrey Tambor), a divorced father of grown children transitioning from male to female. “Transparent,” simply put, is comedic melodrama at its finest. At once deeply darkly funny and sentimental, the show steers clear of schmaltz and manages to probe some very profound and, at times, uncomfortable questions regarding identity of all sorts.

There’s Maura’s extremely well written and important transition; her daughter Sarah’s (Amy Landecker) leaving her husband for a woman; son Josh’s (Jay Duplass) coming to terms with de facto sexual abuse; Ali’s (Gaby Hoffmann) floating in search of an identity; ex-wife Shelly’s (Judy Light) losing her second husband and becoming Maura’s biggest support. But binding all of these stories and transitions is the question of what it means to be a secular (read: cultural and possibly atheist) Jew in America today.

The second season’s first episode “Kina Hora”, available for streaming on Amazon before they drop the whole megilla on December 11, begins with a family photo session at Sarah’s wedding to her once ex-lover, Tammy. Two off-the-cuff remarks, however, cast a pall on the wedding from the start. When Shelly asks the photographer to suggest a “Jewish” version of “cheese” to get the family smiling for the picture, he offers “I want some whine!” prompting harrumphs of “that’s very pejorative” and “a little anti-Semitic” from the peanut gallery. But it’s the photographer’s second faux-pas, calling Maura “Sir,” which abruptly cuts the photo shoot short and suggests the wedding might very well be doomed.

It’s here that the episode’s title, “Kina hora,” comes into play. It’s a bastardization of Ein Kina hora, a superstitious saying, usually followed by spitting — tfoo tfoo tfoo! Both of which, combined, conspire to keep the Evil Eye at bay. In fact, the entire episode is one big kina hora – an attempt to keep a disaster from transpiring (which it eventually does, during the wedding’s hora).

Despite the doom and gloom, there is something beautiful and funny about this episode’s title and its relationship to the events of the episode and the series as a whole. For, if many of us have broken from the fold of Orthodox Judaism (no matter how many generations ago), try as we might we cannot decouple ourselves from the deep psychic hold of superstition and tradition. These, after all, are mystic forces that bind us deeper than we might care to admit.

Surprisingly, though, it’s through the noir comedy of “Transparent” — featuring references to that relative you hate but still play Candy Crush with on Facebook a flashback to a queer-Jewish bacchanal in 1933 Berlin, and lines like “he knocked her rabbi ass up?” — that these questions of how we can transition into who we truly are while still dealing with the deep psychological hold of tradition, are broached with appropriate respect and wit.

Let’s hope the full second season is as good as its first episode. To which I add, as a precaution, Kina hora! Tfoo tfoo tfoo!