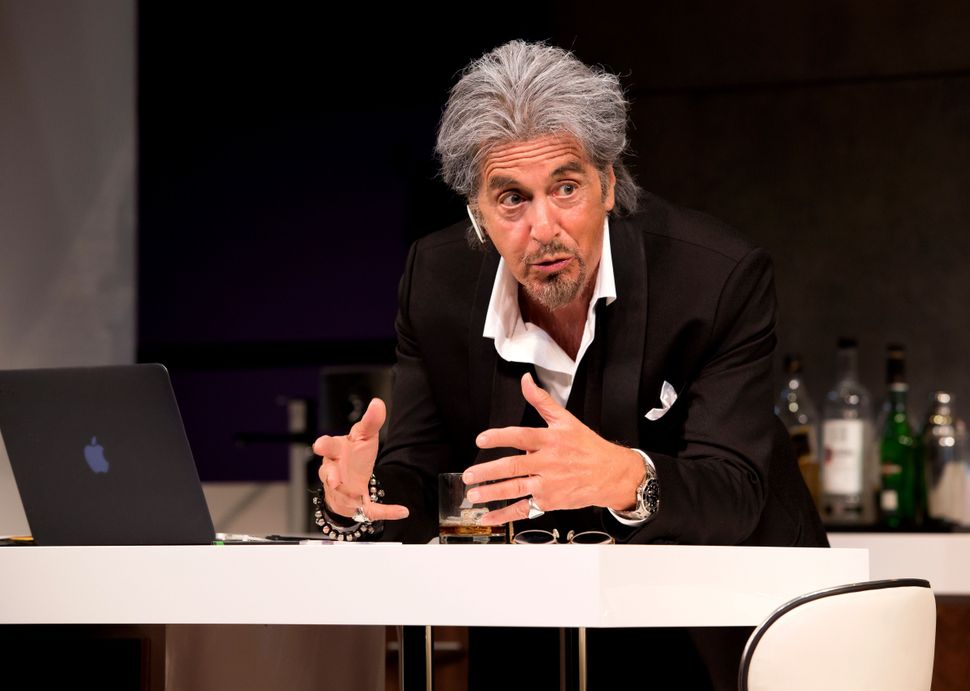 “QUESTION: WHAT IS DRAMA?” When he was running the CBS series “The Unit,” the expert and expertly hectoring dramatist David Mamet a memo to his writers, complete with excessive capitalization and the occasional bolded phrase. “DRAMA, AGAIN, IS THE QUEST OF THE HERO TO OVERCOME THOSE THINGS WHICH PREVENT HIM FROM ACHIEVING A SPECIFIC, ACUTE GOAL,” he wrote. Or, as he explained later: “THAT MEANS: THE MAIN CHARACTER MUST HAVE A SIMPLE, STRAIGHTFORWARD, PRESSING NEED WHICH IMPELS HIM OR HER TO SHOW UP IN THE SCENE.” Without drama, that thwarted goal, that quest, the scene will “BORE THE AUDIENCE, AND WE’RE ALL GOING TO BE BACK IN THE BREADLINE.”

What is at least clear about Mamet’s latest Broadway broadside, “China Doll,” which stars Al Pacino and a Bluetooth headset, is that neither the playwright nor the actor must fear for the breadline. (There is also another actor, Christopher Denham, doing a credible job as an assistant-cum-doorstop.) Ticket sales are brisk — “It could probably advertise with the word ‘Pacino’ scribbled in crayon on toilet paper and still sell like hotcakes,” the Times commented last week — without either man bothering to do particularly good work. In fact, each has fallen back into the easy tics and clichés of himself, and each is being, presumably, handsomely rewarded for it. Good for them.

But less good for us, who must sit through it. Opening night for “China Doll” was delayed for two weeks, apparently to allow for Mamet to rewrite. There are concerns Pacino does not know his lines, is using a prompter. The play is, broadly speaking, indecipherable and, inasmuch as it is decipherable, a little bit nonsensical and a lot uninteresting. Don’t tell Mamet — or his usually talented director, Pam MacKinnon, though one imagines she already knows — but he’s boring his audience.

Let us consider what the goal is, the specific, acute goal, that Pacino’s Mickey Ross is trying to achieve.

He is a master of the universe, we’re led to believe by the way he barks orders, the new airplane he’s trying to buy, the way he calls people, identifies himself and then waits for the name to sink in, as though the hotel clerk on the line has just been informed he’s speaking to Oprah Winfrey. Also, he is wearing a tuxedo, which one imagines is designed to suggest that he has come from a very important event, although the suit, baggy and badly tailored, with an artlessly untied bow tie, suggests not so much Paul Stuart but Jos. A Bank. (Jess Goldstein is the costume designer.)

Ross wants his airplane, which has become embroiled in a tax snafu — which is to say that his plan to avoid $5 million in sales tax has hit a hitch — and is stuck in Toronto. (We are to believe that he is in New York, probably, though the city and state are never mentioned and what the set that Playbill identifies as “an apartment” mostly resembles a Palm Springs living room. The loftily elegant but out-of-place design is by Derek McLane.) He also wants to get to Toronto, to pick up his much-younger, much-prettier fiancée, and he wants to fly with her to London, where he will marry her.

From that perspective, then, the drama is clear. We are watching a mean, manipulative, perhaps lecherous wheeler-dealer unaccustomedly foiled in his attempt to get what he wants. And so he makes phone call after phone call, to the hotel where his girlfriend is staying, to his lawyer, to the airplane salesman, to achieve his goals. Mamet’s recipe for drama is in place — it’s Mamet Classic, really, with the manipulation, the aggression, the macho dick-swinging — but the flavor is missing. It is hard to care whether a billionaire can successfully save a few million; it is harder to care when what you’re watching is a man yelling into the telephone.

Eventually, though, another layer appears. There is one more recipient of Ross’s constant phone calls, a man named Rubenstein, who is not a high-stakes PR guru but instead some other kind of fixer, connected to the governor, who is the son of a late former governor. Ross and the former governor were cronies, and Rubie was part of that coterie. The son, though has turned populist, or leftist, and Rubie has gone with him. Ross is convinced the tax issue is a personal affront, a ginned-up gambit to give this anti-1-percent politician an issue on which to run for president. Now we have the other kind of Mamet, the rich-guy Republican, the man railing against the indignities the benighted sometimes succeed in imposing on the elect. This is a rather interesting idea — is he really going to make a woe-be-the-billionaires case? — but it, too, doesn’t last. And, in any case, it continues to be hobbled by the play’s stasis and Pacino’s Pacinoing.

Finally, then, we hit the play’s final third, where it shifts yet again, this time to lion-in-winter mode. Ross has lost it. Once a great power, he can no longer win at the game. He still has his plane, but he’ll have to pay tax on it. He still has the trophy girlfriend, but it’ll be a while before he can make her his wife. This, too, seems fertile ground: What happens to a modern master of the universe when he loses his mastery? And yet once again it goes nowhere, because the script is near incoherent (or at least the lip-smacking star is), because we don’t begin to care about him, because the final twists make no sense.

The curtain comes down on Ross on his in his Neutra-in-New York loft, braying to sky as his antagonists pound down the front door: “Will no one help an old man?” He’s an ineffective Lear with an impounded Learjet, and so the DRAMA never even gets off the ground.