Meet The Schlep Sisters, the Jewish Ladies of Burlesque 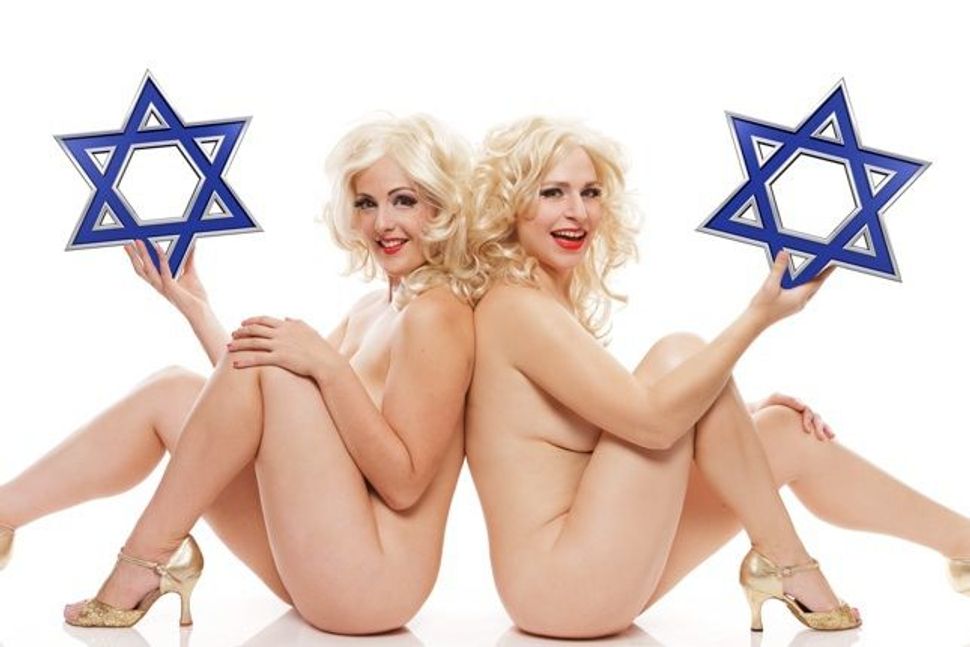 It’s early on a Saturday evening and I’m following Minnie Tonka and Darlinda Just Darlinda, hereafter known as the burlesque duo The Schlep Sisters, through the streets of downtown Brooklyn. We make our way to Mark Morris Dance Center, where Darlinda promptly plunks a blinged out menorah down onto the table. Gold stilettos are whipped out and carefully laced up. A fur pokes out from the costume bag.

There’s only a few days left before “Menorah Horah!” The Schlep Sisters’ annual Hanukkah themed burlesque show, is staged on December 12th—a night, the venue touts, that “will keep you laughing until your candles burn out.” It’s all stretchy black pants and business during rehearsal that day, and the two are tight-lipped about what’s in store for audiences. But based on diligent YouTube research, past years have promised sexy latke making and stripping with a giant dreidel strapped to Minnie’s head.

It’s been eleven years since The Schlep Sisters were formed, and twelve since the two women first met. Back then, Darlinda said, neither really knew what burlesque was. “We got to talking about it and then just inspired each other to meet up and create something together.”

Their first act was at a friend’s party, standing on a large coffee table, performing a reverse striptease to Hava Nagila. “We were really nervous.” Minnie said. “We didn’t know what the heck was going on.”

They still do that Hava Nagila routine, folded into a wide repertoire of Jewish-themed burlesque numbers, from a striptease retelling of Passover to a Queen Esther act. I ask them if they’ve always been well-received within the Jewish community. Have they ever ruffled any feathers?

Their answer is a resounding no.

“We did our exodus act at the community center across from my synagogue.” Darlinda recalled, laughing. “My mom produced our show. The rabbi came to watch us and she was front and center and smiling.”

Meet The Schlep Sisters, the Jewish Ladies of Burlesque