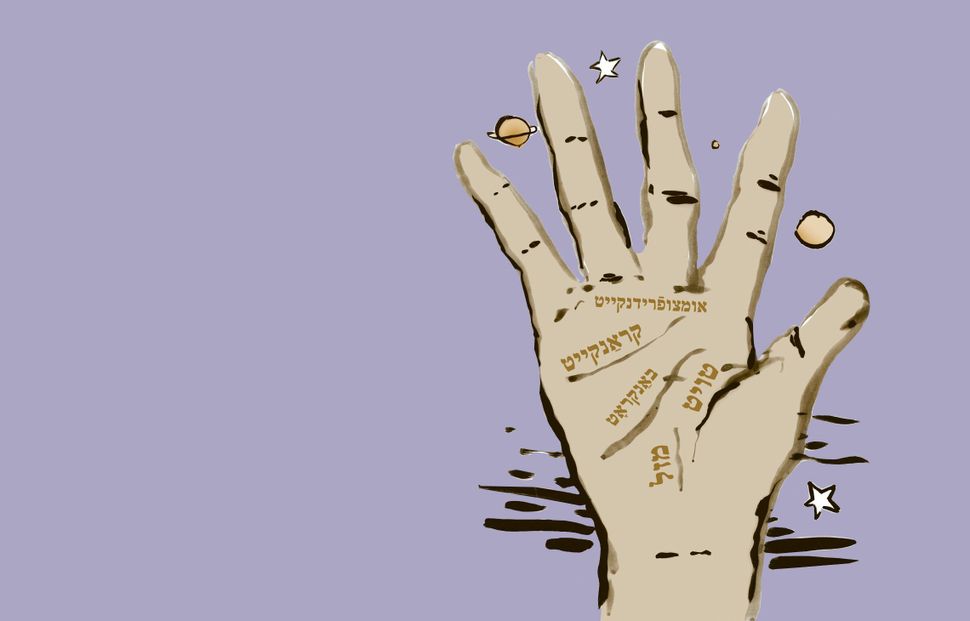 I usually fall into the cynic camp when it comes to psychics or any sort of mystical readers. Or at least I used to. In July, I visited a reader named Monte Farber in East Hampton. He was a source for a story I was writing, and I dropped by to introduce myself. He operates out of The Enchanted World Emporium, a shop he and his wife own on a street that includes such stores as Lululemon and Ralph Lauren. It’s filled with mystical guidebooks, royal blue robes and cases of trinkets.

After much demurring on my end, Farber insisted he at least interpret my star chart. I agreed. He asked for my name, hometown and when I was born. It seemed very important for me to recall whether it was 6:30 p.m. or 6:28 p.m. The computer took several minutes to calculate my chart. When it finished, the screen displayed a black circle intersected by dozens of colored lines and dotted with astrological signs.

I braced for nonsense, but as he rattled off my results, I was shocked at how dead-on the interpretations were: my perfectionism, the quirks I have because I am an only child, my tendency toward living the “marvelous life” (aka being a dreamer) and my desire to date my male clone. He also gave me career advice.

I found myself exclaiming, “Yeah!” and nodding furiously between each reading. I left smiling and feeling oddly happy and clear-minded. It was the opposite effect from the one I’d expected. Farber told me he’d email my chart to me and I wondered what else it might say.

By the turn of the last century, New York City was brimming with psychics, many of them women who’d come from Europe looking to either make some extra cash or for a way to cope with oppressive tenement life.

Larry Epstein, a 69-year-old English professor who lives in Stony Brook, Long Island, had an eccentric aunt Esther who emigrated from a shtetl in Russia to Houston Street on the Lower East Side and brought her European superstitions along with her. She believed if one placed a penny inside a coffeemaker, the penny would turn to gold. She tested her theory multiple times, but each time, the coin jammed the machine.

“That’s the kind of aunt she was,” Epstein said.

She also liked to tell fortunes. During Seder dinners, she would grab her family members’ hands, and try to predict their futures. She’d tell Epstein she envisioned him on a lavish vacation, and even as a small boy, he laughed at the absurdity of it; they had no money.

But Epstein formed a bond with his aunt during these encounters, and the fantasy helped transport him out of his working-class life, if only for a moment.

Epstein’s aunt read palms only for pleasure, but she represented an almost entirely underground network of Jewish psychics who operated on the Lower East Side. Several of them, such as Abraham Hochman and Naftali Imber, became famous, but there were almost 1,000 undocumented seers in the city at the time.

“Most of the fortune-tellers were simply housewives seeking to raise a few dollars,” Epstein wrote in his book “At the Edge of a Dream: The Story of Jewish Immigrants on New York’s Lower East Side,” published in 2007. He also wrote that it helped “relieve them of the tenement’s isolation,” the same feeling he experienced when his aunt told his fortune.

The motherly psychics who populated the Lower East Side in the early 1900s are now gone, replaced by the ones who operate out of neon-lit storefronts or who have been arrested for fraud. This latter issue — that psychics used their supposed powers to rake in money — was a problem even a century ago.

A New York Times article from 1909 investigating the abundance of psychics, particularly in poor neighborhoods, claimed, “There are a number of simple tricks among them however, which enable them to gain a hold among their dupes which nothing can shake.” The most obvious of these include guessing the age and marital status of each client. The article also called the psychics “quacks,” “soothsayers” and, in one case, an “unprincipled person,” awaiting “her prey.”

Many clients sought clairvoyants for advice about acclimating to the new world. The psychics promoted themselves as “professors,” and although they had no legitimate credentials, they used the title to convey their expertise. Often, women wanted guidance about relationships, money and careers.

The Times article said, “the self-styled prophets have come to enter the most intimate family or business life to a degree rarely reached by the family physician or even the clergyman or priest.” Or, of course, the rabbi.

The typical charge was 15 cents a reading, which produced an incredibly prosperous industry that accumulated $10,000 a day for readers throughout the city, according to the Times article. The well-known clairvoyants were able to carve out a bustling business. Abraham Hochman, for example, was often pursued by throngs of women who waited on his stoop for his services. He also owned a wedding hall and was known to throw a lavish party or two.

The psychics offered detective-like services as well, including locating missing husbands, which Hochman claimed to have a knack for. Men who were under stress or in a panic frequently deserted their wives, so much so that The Forward began running missing persons ads. The newspapers often covered psychics’ successful predictions and wrote in-depth pieces about the booming enterprise.

The famous clairvoyants left few traces of their past, so it’s been largely up to historians to piece together the missing links.

The Lower East Side Tenement Museum recently gave a special tour of Dora Meltzer’s apartment, followed by a lecture on the neighborhood’s Jewish psychics. Meltzer was an “unexcelled” clairvoyant who operated out of 97 Orchard Street. In 1993, excavators uncovered a scrap of yellowed paper weighed down by rubble, which turned out to be an advertising flyer for Meltzer’s business. Bold text covers most of the surface area, and a small illustration of an open palm is sketched on the left side. As a “World Famous” palmist and mind reader, she claims to be able to guess a client’s age, name and — according to the Yiddish translation — how much money he had in his pocket. During Meltzer’s business hours, from 9 a.m. to 10 p.m., she also gave advice about lawsuits, sickness and journeys.

The tour commenced at 6:30 p.m. sharp, when a group of about a dozen people, mostly women, followed the guide, Laureen Fredella, out of the museum’s gift shop and halfway down Orchard Street to number 97. Before walking up the building’s steps, Fredella paused to ask how many had been to a psychic before. About half raised their hands (I didn’t).

She led the group up the narrow, tilted stairwell. Chipped paint dangled from the fleur-de-lis molding on the wall paneling and ceilings. Cracks in the floorboards revealed the landings below.

A 325-square-foot three-room apartment on the third floor served as a prototype for the kind of apartment Meltzer might have kept. A black doll with buttons for eyes lay in a crib. The Meltzer family actually lived on the first floor, which has been converted into a dressing room for the museum’s actors.

Fredella handed out copies of Meltzer’s flyer and invited the attendees to analyze some of the language. Meltzer’s decision to call herself a “professor” was “to feel you’re getting your money’s worth,” someone said. Of Meltzer’s ability to predict someone’s age, an older woman said, “You can guess, but you don’t have to guess right.” The group laughed.

Fredella explained that children typically acted as accomplices by sifting through purses when clients came through the doors. They wanted to find identification. The kids also might have translated their parents’ visions from the native Yiddish tongue into English, which helped produce a mysterious aura surrounding the psychic.

After the tour, the group walked to a study room above the gift shop and grabbed glasses of wine before settling down to hear Eddy Portnoy talk. A Forward contributing editor, Portnoy works at the Yivo Institute for Jewish Research as an academic adviser and has studied Jewish clairvoyants extensively.

He told stories of famous predictions. In one, Hochman told a woman her missing husband would turn up at Pitt and Grand at 10 p.m. on the night in question. She showed up and sure enough, there he was.

In another, a man named Naftali Imber, who uncannily resembled Portnoy, with a chiseled nose, long, flowing locks and a high hairline — someone in the audience unabashedly pointed this out to much laughter — thought the east and west United States would engage in a civil war. That vision turned out to false. At least so far.

Portnoy talked about fashion and what it meant to be a psychic. Sometimes, he said, men might don clothing from the Middle East, such as turbans or fez-style hats, to enhance their aura of mysticism.

“A persona is created when someone takes on this type of employment. The client wants something exotic,” said Portnoy. “They’re helping individuals function in a world that’s unfamiliar to them.”

As for my reading, when I opened up the chart Monte Farber emailed to me, I let out a snort. It was 18 pages of analysis with headings such as “Jupiter in strong sextile” and “Sun in weak conjunction with Mars.” In 18 pages, it seemed good odds that at least some results would prove accurate.

But I still felt that elated sensation, and I realized that was the important detail. The reading wasn’t significant for its ability to correctly guess my future or life’s particulars, but rather because it had tapped into my own consciousness. For every weakness Farber pointed out, I saw room for improvement and for every strength, an opportunity.

For the women who visited Meltzer or Hochman before me, it might not have impressed them that the clairvoyants knew their age or the amount of money in their pockets as much as whether they could lift them to a higher state of being and allow them to see life differently. And even if people like Larry Epstein talk about using psychics as a means to escape, it seems, at least to me, that they can be also be an approach to navigating reality.