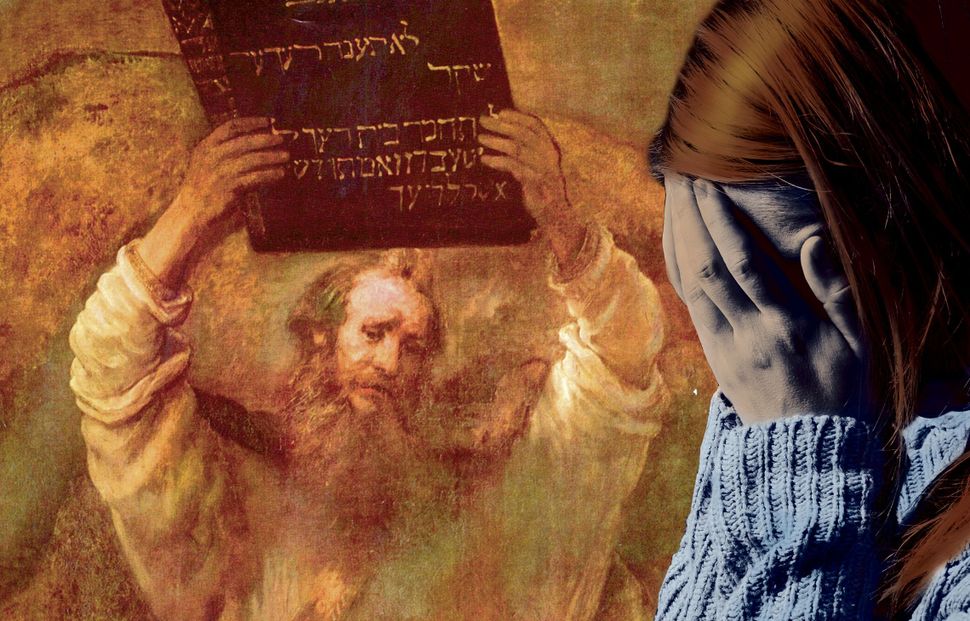 The first time I broke down, I was walking along the Thames in London with my friend David. It was early on in our five-week backpacking trip, and we started debating the authenticity of the Torah. I said that it didn’t matter to me whether God literally gave Moshe the tablets on Mount Sinai — the stories are true because we tell them and live by them. David was unimpressed. “It happened or it didn’t. There’s no in the middle,” he said.

I felt furious but simultaneously jealous of his certainty. And I started to cry. Right in the middle of a busy London street. Which was strange, because as a kid, I felt pretty confident in my Jewishness. We drove to synagogue on Friday and Saturday — which meant running around with my friends until it was time to collect those weird jelly candies they threw at bar mitzvahs. I went to day school and I was already writing Hebrew script.

My troubles began in the third grade, when we moved from Austin to an Orthodox neighborhood in Atlanta. The practices and teachings seemed a good fit for my spirituality-seeking parents. However, I’d gone from playing with the children of freethinking Austinites to navigating the cultural landscape of children raised on a combination of dogma and a good old Southern-seeming repression. I’d always been praised for speaking my mind. But now I felt too loud, too wild, too other.

It got worse. That year, I learned I wasn’t technically Jewish. My mother was raised Irish Catholic, and when I was six, we both had a Conservative conversion, which was not considered valid in our new black-hat community. Now I didn’t just feel other. I was other.

But I’m Jewish, I protested! My whole life I’d known I was Jewish. I’d known that my blood was the blood of Abraham, that my people had wandered in the desert for 40 years, that I’m alive because my great-grandfather escaped the Holocaust. Suddenly, I was being stripped of that identity.

Despite my indignation, at age nine, I agreed to go through an Orthodox conversion. “It’s just a formality,” my father said. “Like getting a driver’s license.” The morning of my conversion, my mother drove me to the mikveh. “I’m not going in naked,” I told her. “I’m sure they’ll have a big T-shirt for you,” she said. When we arrived, the head rabbi sat down with me to question whether I was sure I wanted to convert. “Maybe you want to wait until you’re bat mitzvahed to make such a huge decision,” he said. “I already am Jewish,” I protested. “This is just a formality.” He continued to tell me I wasn’t what I knew I was. He questioned and tried to dissuade me (as I now know is customary). I felt devastated, humiliated.

Finally, I was allowed to enter the mikveh. But there was no big T-shirt for me. I was expected to undress and immerse while three grown men watched me from behind a glass window, saying the necessary blessings. My mother drove home and picked up a big T-shirt for me. After the conversion, I was indisputably Jewish, and yet I felt more confused than ever about my identity. I felt my Judaism had been taken from me and perverted, twisted into something exclusionary and cruel.

I began to stray from the Orthodox path. In high school, I started using my cellphone on Shabbos. I stopped taking the existence of God as a given. In college, my father begged me to go to Rosh Hashanah services, to hear the shofar. Every year, I said I’d think about it, but I never did. For some reason, I just couldn’t. I felt allergic to Judaism. And perhaps weirdest of all, I started having minor breakdowns, like the one I had with David, when I tried to deal with any expression of religious certainty.

The second time it happened, we were spending Passover in Pittsburgh with friends. We usually spent the holiday with my extended family, but weren’t that year due to a Chekhovian patchwork of family issues. The men were at synagogue while the women hung out in the kitchen. A young woman, a recent ba’alah teshuvah, told me she wasn’t spending Passover with her own family because her parents’ kitchen wasn’t kosher. I hated her for having the option to be with her family and choosing not to.

At dinner, she asked, “Why did HaShem wait so long to free the Jews from slavery?” I rolled my eyes and said, “Well, God works in mysterious ways.” Unfazed, she said, “No, I think it’s because he loves to hear the prayers of the righteous.” My heart rate picked up, and I started to sweat. Her childlike delight enraged me. I wanted to scream in her face, pull her hair, anything to wake her up. Instead, I left the room and spent the night crying. And these breakdowns continued year after year.

Last summer, I was walking with my father in our neighborhood one evening, the air hot and sticky. I finally told him how much the conversion had upset me, how I felt un-Jewish, rejected. I know how important Judaism is to him, and how much this might disappoint him. But he told me I was the most Jewish person he knows. “How do you figure?” I asked. “Because the compass of your soul points towards the Jewish true north. You believe in justice, mercy, kindness, truth,” he said.

This Rosh Hashanah, I went to shul to hear the shofar. I still felt uncomfortable, and I didn’t stay long. But I stood in my discomfort. And I didn’t cry. I don’t know if I’ll ever feel I belong in a religious setting, if I’ll ever feel truly Jewish. Maybe one day, I’ll find my way back. But for now, I do know that I have the same unconditional love from my father as the children of Israel in the Torah have from theirs. And perhaps that’s good enough.

Arianna Skibell is a writer and journalist living in Harlem. In kindergarten, she received the Bright Ideas Award, and has been thinking ever since.