There are more than a few songs that pay homage to the Ashkenazi Jewish mother. They’re schmaltzy, but if you’ve half a brain and any measure of experience, you can taste the irony like the tang in Canter’s coleslaw.

Two of my favorites: “A Yiddishe mame, is there anything better in the world […] Oy vei how bitter when she’s gone,” and the more popular “My yiddishe mame, I need her more than ever now/ My yiddishe mame I long to kiss that wrinkled brow/ I long to hold her hands once more as in days gone by/ And ask her to forgive me for things I did that made her cry.”

These songs echo the most famous of Jewish chants about the virtuous yet difficult balaboosta, the “Eshet Chayil” from the book of Proverbs. “Who can find a woman of valor?” the song asks. As anyone who has given this this line serious though knows, the question soon crushes under its own weight. This is very much the sentiment of the second, fabulous season of Jill Soloway’s “Transparent”, finally available for streaming on Amazon.

If “Transparent” has been hailed as a groundbreaking show, it’s because of, well, its transparency. In documenting Mort Pfefferman’s (Jeffrey Tambor) transitional journey, his coming out as Maura, the show’s first season explored the trans-experience in a far-reaching, meaningful, credible and intimate way. This unveiling was even mirrored in the show’s production process – Soloway works with several trans consultants and instituted a . But transparency, in the first season, extended beyond this important angle. One of the most jarring moments involved unveiling the sacred ritual of halbashah – the final episode opened with the shrouding of a corpse in 10 pieces of linen and a sash in the form of the Hebrew letter shin by a burial society.

In its second season, “Transparent” brings this same level of openness to the question of the Jewish Mother, that much loved, much maligned and much martyred figure; the ultimate archetypal figure of haimish feels, sacrifice and guilt. Whereas the first season showed Maura’s coming out, the second shows her accepting motherhood through a storyline that connects four generations of mothers in and around the Pfefferman clan.

There’s the central ark of Maura’s “inherited trauma,” which takes place in flashbacks to 1933 Berlin and 1934 Los Angeles. In these scenes Maura’s grandmother Yetta (Michaela Watkins, in flashback) and her mother Rose (Emily Robinson, in flashback) prepare to leave Germany for the United States. We also get an origin story for Tanta “I’m-pretty-sure-she-died-in-the-Holocaust” Gittel’s (Hari Nef) ring.

Gittel (born Gershom), we find out, was living a Weimar version of Maura’s experience with the help of Magnus Hirschfeld (played here by Bradley Whitford). The flashback storyline ends with Rose giving birth to Maura.

And then there’s the traditional martyr, Maura’s ex-wife Shelly (Judith Light). You know her. She’s the one who greets her son’s reproaches about his, oh, I dunno, having been molested by the family babysitter, with a classic litany straight outta Lviv: “You think I was so terrible? I didn’t beat you. I kept you fed. You had a credit card […] other people throw babies in dumpsters […] You had it pretty good!”

(Seth Meyers called Light “the best Jewish mother I have ever seen on television.)

Shelly is also classically controlling, showing Maura unprecedented support in a bid to entrap her into resuming conjugal life with her (some of the season’s most wrenching, brilliant scenes). And, of course, she makes everything about her, including a miscarriage she claims to have accidentally brought on by invoking, inadvertently, the evil eye. 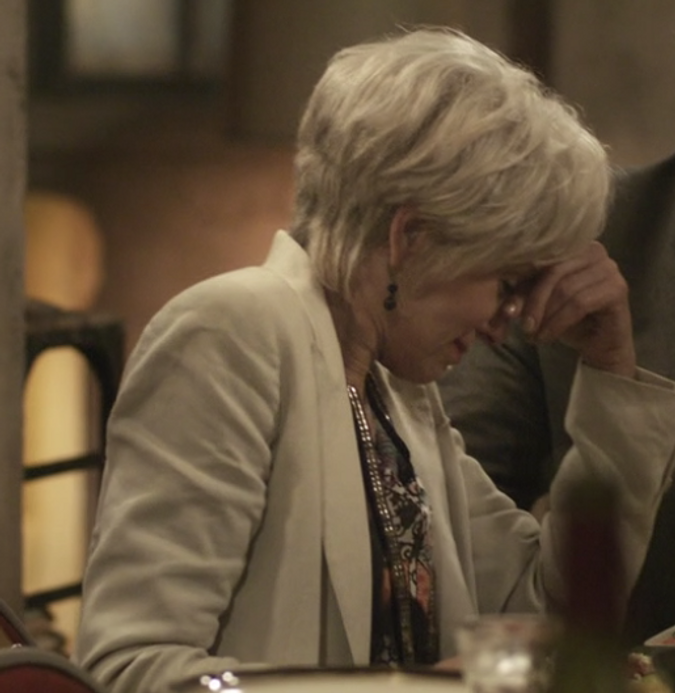 Other plot-lines include: Maura’s daughter Sarah (Amy Landecker) trying to come to terms with single-motherhood and having to become a mother to her own mothers, Maura and Shelly; son Josh’s (Jay Duplass) fiancé’s (Kathryn Hahn) pregnancy; and daughter Ali’s (Gabby Hoffmann) relationship with Professor Leslie Mackinaw (Cherry Jones), a possibly trans-exclusionary feminist gender studies professor who was unfairly discriminated against by Maura five lifetimes ago, which morphs into a complicated and uncomfortable sexual/mothering/mentoring relationship.

Though there is no lack of mothers, forms of motherhood and mother-related troubles in this season, the figure who’s most difficult to watch is Shelly. This is due in equal parts to both Judith Light’s devastating performance and the quality of the writing. Why is it that the Yiddishe mame, over and over again, is allowed to be depicted as such a selfish character, unable to be truly supportive of her children when they are having difficulties and or are unhappy.? Why is it that she takes everything to be her fault, to the point that she either crumbles into tears are brazenly denies her childrens’ or ex-spouse’s feelings?

These questions are not meant to reproach Soloway’s use of this trope. Much to the contrary, I think she’s doing something beautiful and brutal with this portrayal – by juxtaposing Shelly with other figures of Jewish motherhood, she’s widening the scope of this problem of motherhood, allowing this discussion of angst, love, tears and fear of disappointment to include the idea of a mother in all possible avatars and genders.

Between beautiful, deeply symbolic shots and sturm and angst drama that leaves you wrenching and rubbernecking, “Transparent”’s second season may not be as neatly written as the show’s near-flawless first season. But the questions it raises about the transparency at play in the most fraught of all relationships (Jewish or otherwise) reaches a level that no other show in recent memory has even dared approach.