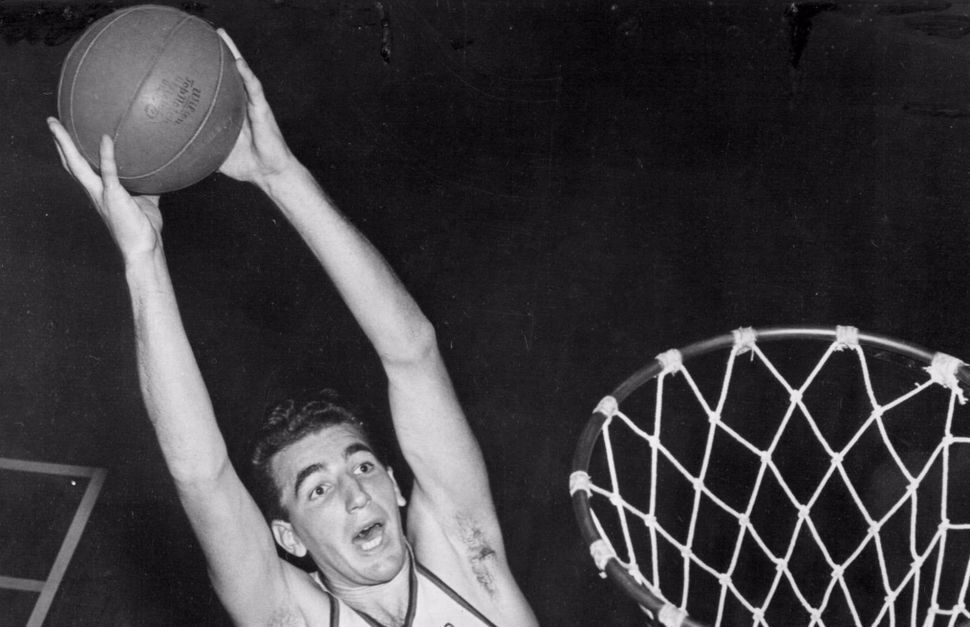 Yes, of course Dolph Schayes was a legendary pro basketball player—as most of the stories noted following his death last week at the age of 87, probably the greatest Jewish basketball player in history.

But although I was a sportswriter for more than 40 years with The New York Times, I met him only once. And that memory is not of him as a spectacular ballplayer — but as a typical Jewish father.

It was 1984 and my son Mark, still in high school, attended a summer program at Syracuse University. I was vaguely aware that Schayes had remained in Syracuse after his great pro career there with the Nationals. I had even met his basketball-star son, Danny, a few years earlier at the home of Danny’s agent, Bob Woolf of Boston. In fact, one night my daughter, Ellen, and some friends had gone out with Danny.

Well, my wife and I were having lunch in a small restaurant in Syracuse, and at the next table I spotted — instantly, for he was 6 foot 8 inches tall — Dolph and his wife. I went over and introduced myself and Dolph said, “What are you and your wife doing now?” We had no plans because our son was in school.

So he invited us to sit down. Before we were there even five minutes, Dolph started to talk about Danny, his 6-foot, 11-inch, 235-pound boy who was the center for the Denver Nuggets. Danny was one of the N.B.A.’s noted players — perhaps as much for his name as his talent. But Dolph was unhappy.

“The coach isn’t using him correctly,” moaned Dolph. “He doesn’t give Danny a chance to play.” The younger Schayes had averaged fewer than 18 minutes a game for Coach Doug Moe. And that made Danny’s daddy unhappy.

Like Dolph, Moe had been a star in New York City’s Public Schools Athletic League play, performing for Erasmus Hall High School (Schayes had starred for DeWitt Clinton in the Bronx during the war years, then went on to New York University). I remember Moe playing against my Thomas Jefferson High School in Madison Square Garden, and the girls from Erasmus screeching, “Dougie! Dougie!” But the next time I heard someone mention Moe, it was not with affection.

Here was Dolph Schayes, a member of the Hall of Fame, a former N.B.A. head-coach himself — and he was dissing a fellow-coach. Of course, it wasn’t just any coach. It was his son’s, and his son wasn’t getting a lot of playing time. He started only 15 games. Dolph shook his head as he spoke of Danny, and I thought: Whatever Dolph’s own career had been, whatever his accomplishments, whatever his legacy, at this moment he was still a father. And I could relate to that. Because just a few years earlier I had complained to Mark’s Little League coach that he wasn’t using Mark enough—me, who had written disparagingly about fathers and mothers at games who put pressure on their kids.

Well, after lunch Dolph said he’d like to show us around Syracuse. The next day we met, as agreed, on a walk along the Erie Canal. I saw him pacing back and forth, and when I got closer, he said, “I’ve been trying to think of what to show you.”

We walked along the Erie Canal for a while, and he gave us a little history. Then he said, “I’ve got a place you might be interested in. The truth is, there’s not much going on in Syracuse.”

And he took us to a Wegmans supermarket. That’s right, we toured a giant grocery store. I had never heard of Wegmans, which had a chain of stores in that part of New York State. And Dolph was part of Syracuse now. He had spent virtually all his 16-year playing career in Syracuse, where he won a championship. Now, he was also proud of his business acumen.

He explained that the owner of the Syracuse Nationals, a man named Danny Biasone, had advised Dolph to put his playoff earnings into real estate. “It seemed every year we made the playoffs, and every year I bought some apartment houses or invested in them.” When I met Dolph, he said he owned buildings with hundreds of apartments.

By then he had also coached the American team to victory in the Maccabiah Games, he would also be honored as one of the 50 greatest players in N. B.A. history in a 1996, 50th anniversary event, and his place was already secured as one of basketball’s most important figures.

And yet, when I think of Dolph Schayes, I don’t think of that two-handed set shot, or his rebounding, or his redefining the forward position. I think of our walk along the Erie Canal, or walking the aisles at Wegmans—but especially I think of how Dolph Schayes was having some regrets because his 6-foot, 11-inch, million-dollar-a-year son, wasn’t getting the playing time his daddy wanted for him.