A ‘Golden’ Trip Back to the World of Yiddish Theater 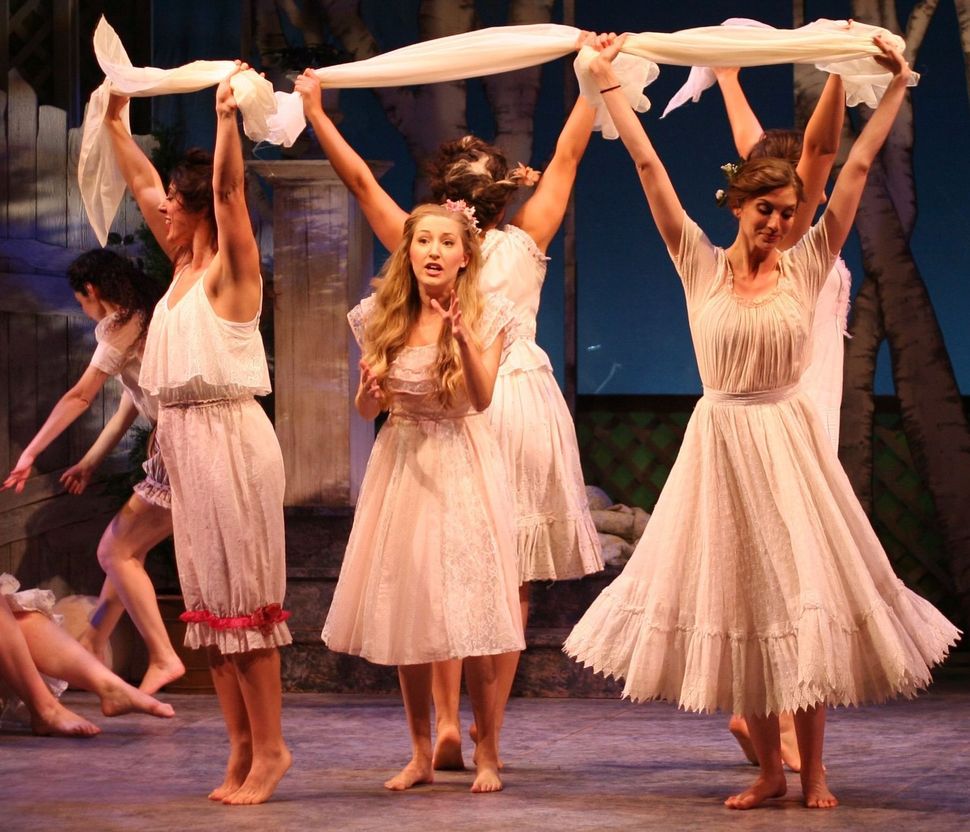 When Jacob Pavlovich Adler — a founding father of New York City’s Yiddish Theater District and one of its greatest stars — died in 1926, The New York Times estimated that between 100,000 and 500,000 mourners lined the streets for his funeral. The turnout was likely even greater than that, in the same year, for the funeral of silent film star Rudolph Valentino, whose films screened at hundreds of theaters across the United States and internationally.

It was in this environment, in which Yiddish theater was considered on par with Broadway in terms of both its quality and popularity, that “Di Goldene Kale,” or in English, “The Golden Bride,” premiered in 1923. On the evening it opened at the 2nd Avenue Theatre it was one of 14 Yiddish productions running in the city.

“The Golden Bride” is now getting its first staged revival in nearly 70 years from the National Yiddish Theatre —Folksbiene, at the Museum of Jewish Heritage — A Living Memorial to the Holocaust. Last performed in 1948, the operetta’s libretto and score were scattered between libraries and research institutions by the descendants of Joseph Rumshinsky and Frieda Freiman, the show’s composer and librettist, respectively. (Louis Gilrod wrote the lyrics.) Those scraps were reunited after musicologist Michael Ochs found a manuscript of the vocal score at Harvard’s Loeb Music Library in 1984. Over time he collected and restored the full script and score.

“Very rarely do you have that opportunity to work on a piece of artistic history,” said Bryna Wasserman, co-director of “The Golden Bride” and executive director of the Folksbiene. “It really gives you insight to how important Second Avenue was and how important Yiddish theater was to the development of Broadway.”

“The Golden Bride” tells the story of Goldele, a girl raised in a Russian shtetl. She receives an unexpected windfall from her father, who moved to America early in her life to make his fortune. Whisked away to America by her uncle and cousin, she decides to marry the suitor who can find her long-lost mother.

That story — a “celebration of immigration and celebration of the fairy tale of, yes, one can make it in America,” according to the production’s conductor and music director, Zalmen Mlotek, artistic director of the Folksbiene — provides the other great historical significance of “The Golden Bride.”

“The stories of immigration [were] so universal in New York, where a staggering amount of the population was born elsewhere or [were] first or second generation,” co-director Motl Didner said.

When “The Golden Bride” premiered, New York City was a new immigrant’s town, having absorbed waves of immigrants from various parts of Europe through the end of the 19th century and the beginning of the 20th. Today the immigrant experience is one to which many Jewish residents of Eastern European descent relate through their families, but fewer have gone through it themselves.

Many of the show’s actors come from immigrant Jewish backgrounds. They’ve found that performing the play allows them a new level of access to their grandparents’ and great-grandparents’ experiences.

“My great-grandparents only spoke Yiddish,” said Jillian Gottlieb, who plays Goldele’s foster sister, Khanele. “I felt a deep connection when I knew that.”

“I get the chills, truly,” said Bruce Rebold, who plays Khanele’s father, Pinchas. “I firmly believe that my grandparents and my father, who passed away young and spoke Yiddish as well, are seeing this from above and are smiling. There was one point when I was moved to tears about speaking this language that I remember my father speaking to his mother fluently, and here I am, in my 60s, being part of bringing this language back to life.”

While “The Golden Bride” is essentially optimistic, the passage of time has given it a bittersweet undertone. At the end of the first act, as Goldele bids farewell to the villagers she has known her entire life, she sings “Departing from you, oh, how hard it is for me. / I give you, I give you my word, / That I’ll bring you to the Golden Land.”

The villagers react to her promise with glee; she has extended the immigrant fairy tale to include each of them. Sure enough, in the second act we see a host of familiar faces with Goldele in America: Khanele; Pinchas and his wife, Toybe; Kalmen the matchmaker, and Misha, Yankl, Berke, and Motke, Goldele’s cohort of suitors. The progress of their assimilation is unmistakable; in one comic scene, Pinchas and Toybe revel in their new American clothes and try to speak a bit of English.

Watching them cavort in their new American circumstances, I found myself imagining what their former shtetl, so lively in the first act, must have looked like absent its citizens. Contemporary audiences may find it difficult to fully celebrate the miracle of immigration alongside the characters. We cannot avoid the fact that that miracle, which saved the lives of thousands of Jews, also contributed to the loss of much of the culture of Russian and Eastern European Jewry. We know that many shtetls like Goldele’s were abandoned or destroyed by the pogroms; we know that more still were lost during the tumultuous existence of the Soviet Union. We also know what the show’s original production team could not have anticipated: that the Holocaust would make nearly final the cultural loss that began when Jews left Russia and Eastern Europe for the United States.

As the program notes state, when “The Golden Bride” was written and first produced, “the United States was passing stringent laws that would effectively keep out further Jewish immigration from Eastern Europe.” Those laws would deny refuge to those attempting escape from the Holocaust. The show’s writers might have responded to those laws frantically, seeing them as closing the window through which the culture of the Old Country could be brought into the new. And thus, Goldele’s search for her mother — her lamenting desire to have her found and brought to the New World — becomes more than an issue of family ties; it becomes an issue of the desire to remember and retain the mother culture.

That desire also manifests, briefly, as a wish to maintain the option of return. Misha, Goldele’s childhood friend, expresses that interest close to the show’s finale. Singing of Russia, which had formed into the USSR only a year before “The Golden Bride” premiered, Misha proclaims “Fathers, mothers, and brothers / Send greetings to you from afar, / And hope that a joyful time / For Russia will come again. / They send their greetings to you and say / That soon the evil will be past / And across the world / The free song will be carried anew.”

Given that much of “The Golden Bride” revolves around the commitment to a new life in America, this interlude of hope for new life in Russia stands out. It was seen, perhaps, as another route by which to avoid the decline of the culture Goldele and the villagers she grew up with value so clearly. It is, of course, also ill-fated; the Russia in which Misha found such hope quickly declined into both authoritarianism and genocide.

“You see the joy they have when they realize that their heroine is going to America and going to assimilate into a new culture,” Mlotek said. The audience will see that joy hand in hand with pain.

“The Golden Bride” runs through January 3 at the Museum of Jewish Heritage — A Living Memorial to the Holocaust.

A ‘Golden’ Trip Back to the World of Yiddish Theater