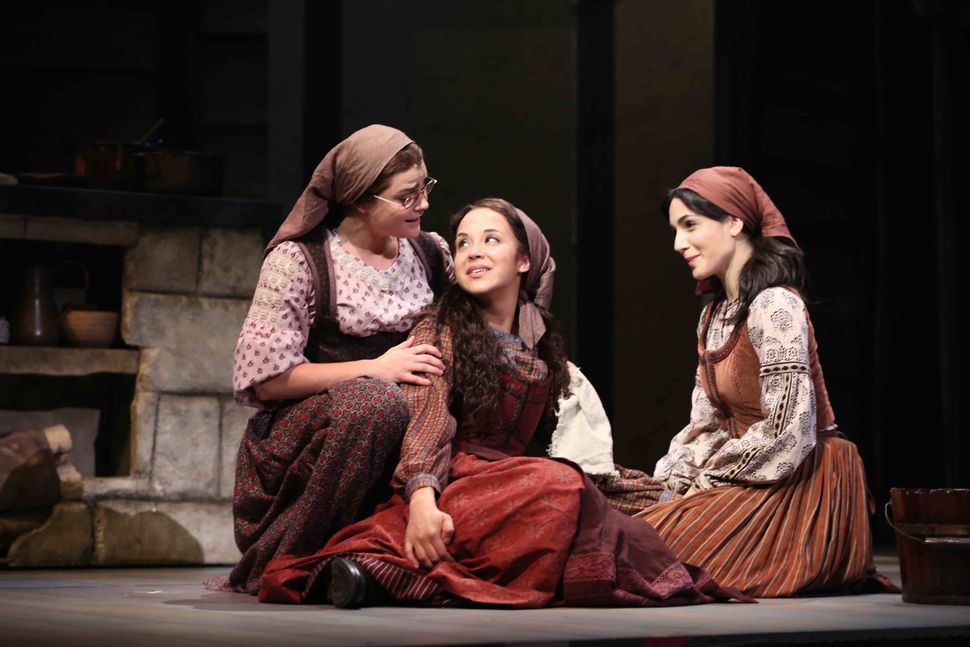 In “Changing Places,” a terrific academic novel by David Lodge, a professor and his colleagues play a literary parlor game called “Humiliation.” In the game, the players attempt to one-up each other in admissions of ignorance by confessing the most inexcusable examples of books they haven’t read. When Professor Howard Ringbaum admits he never read “Hamlet,” he wins “Humiliation” and promptly gets himself fired.

Therefore, it’s with a bit of trepidation that I confess that until the other night, I had never seen “Fiddler on the Roof.” Not on Broadway, not in a touring production, not in the version that was performed in college my senior year. I never even saw the movie. So, if it turns out that I’m never allowed to write for this publication again, you’ll know why.

One of the reasons I skipped “Fiddler” is because, when I was a kid, my parents seemed uninterested. My maternal grandmother had grown up in a town much like Anatevka, in the same general region where Sholem Aleichem was born, about a half-day’s drive away, in fact, from the town of Pereyaslav. Why would I want to see a musical about the place I came to America to escape, seemed to be her general attitude.

Besides, in the words of my mother, it was “not a happy story.”

The other reason is that, even without having seen it, I sensed that I already knew it by heart anyway. It was a staple of every other Bar Mitzvah and wedding I attended. I still remember cringing one time in Chicago’s near north suburbs when a Bar Mitzvah boy was called upon to serenade his guests with a song sung to the tune of “If I Were a Rich Man” — “This is my Bar Mitzvah/Die-dee-Die-dee-die-dee-duh-huh-die-dee-die-dee-die-dee-dum/I hope you like the bagels and the lox/We got ‘em fresh, they don’t come from a box/Deedle-deedle-deedle-dee.”

The musical seemed as if it would be “too nudge-y,” in the words of my mother.

Or, as Jackie Mason once said on a different topic, “too Jewish.”

The other night, though, I decided that I finally had to see the show for myself — after all, I’m a father, and taking a kid to “Fiddler” seemed like an easier introduction to Jewish education than Hebrew school. As it turns out, the new Broadway production directed by Bartlett Sher and starring Danny Burstein in the role of Tevye the Dairyman is totally delightful. But what struck me most about it is that, in some ways, it’s almost exactly the opposite of a Jewish musical.

Like so many classic Broadway shows, “Fiddler” makes a strong argument for the inevitability of assimilation and conversion, not to Christianity per se, but into the mainstream. Like Fraulein Maria leaving the nunnery for familial bliss in “A Sound of Music,” Maria and Tony abandoning their Sharks vs. Jets upbringing for love in “West Side Story” or isolated Japan ultimately embracing American imperialism in “Pacific Overtures,” one by one, Tevye’s daughters leave behind their Jewish shtetl existence in search of a more contemporary and western ideal.

A couple of lines from the 1957 musical “Candide” come to mind: “These days you have to be in the majority… I am so easily assimilated.”

In 1964, when “Fiddler” premiered on Broadway, the show may have conjured up painful memories for people of my grandparents’ generation, but at the same time, the message of inevitability was probably reassuring for those who had left the old world behind and were experiencing some sort of survivors’ guilt. In the beginning of the musical, abandoning the old ways is a matter of choice; by the end, in the face of an impending pogrom, it has become necessary for survival. As Chava tells her father Tevye, “the world is changing, Papa.”

More than fifty years later, the world that Anatevka represented is no longer changing; it has changed irrevocably. As the musical predicted, the old traditions — at least for the audience at the Broadway Theatre — are gone. In fact, if there is a new tradition, it is “Fiddler on the Roof” itself, which seemed so familiar to the audience that it had the aspect of scripture. A man in front of us in the rear mezzanine claimed to have seen the show eighteen times; the woman seated next to us mouthed all the words of Yenta the Matchmaker, a role she will be playing in an upcoming community theater production.

Issues that may have seemed unsettled when “Fiddler” premiered seem to have been more or less decided by now. When Tevye sings, “If I Were a Rich Man,” the song may be aspirational for him, but for the audience it serves as confirmation and approval — after all, there aren’t a lot of cheap seats in the house where we’ve purchased our tickets. In comparison to Tevye, we are all rich men and women now.

The result may give the audience the sensation of having traveled in a time machine; we are, in essence, the sequel to “Fiddler on the Roof”; we are what Tevye and Anatevka have become. While we watch him, he is imagining us. We have created our own world with its own traditions — a blend of the old world and new, and, if we wonder about whether the road our ancestors took was the right one, the musical absolves us by telling us that there was no other choice. We can confess and “Fiddler on the Roof” will forgive us.

I attended the show with my ten-year-old daughter who had never seen the show before either. She loved the music and the performances, loved seeing the world that her great-grandparents came from. The following morning, she blasted the soundtrack on Spotify until we told her to turn it down.

And then, in the early afternoon, we went out to buy a tree.