Don’t Mess (Too Much) With Tradition: Updated ‘Fiddler’ a Triumph 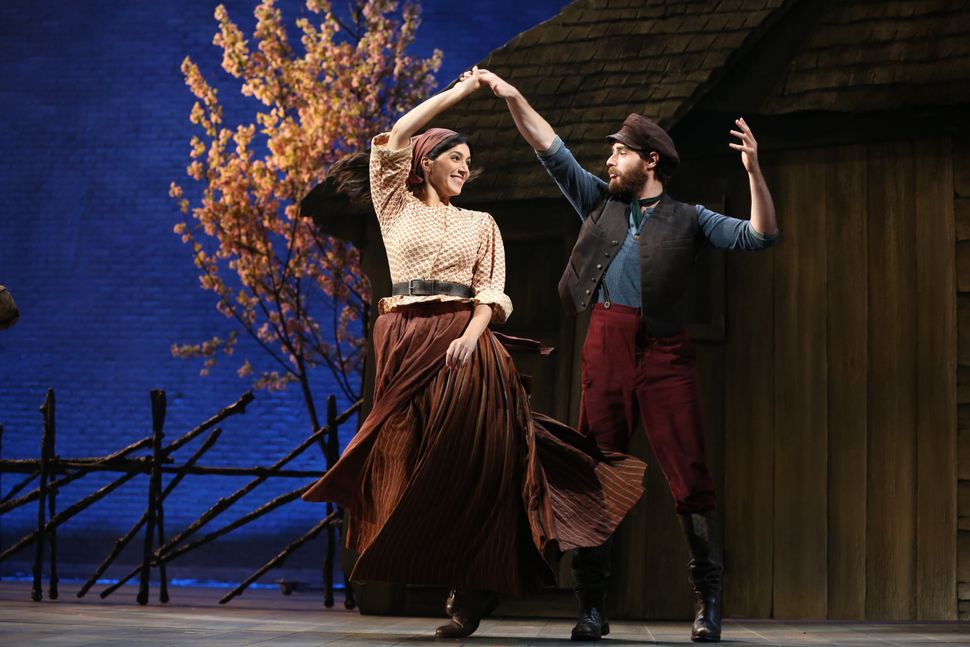 The thing about traditions is that in order to thrive they sometimes need to change — just enough, and in the right ways.

Even Tevye the milkman, musical theater’s great advocate for tradition, knows this. Oh, sure, he’ll raise a fuss when his traditional ways are questioned, but, on the other hand, he’ll come around soon enough. One daughter wants to marry the nebbish she’s always loved, not the wealthy alter kocker who’s been picked for her? Impossible! Unthinkable! But he allows it, because he wants her to be happy. Another daughter wants to run off with her beloved revolutionary, without even asking for permission? Unheard of! Absurd! But he allows it, because he knows it’s what she wants.

Director Bartlett Sher also knows that the best traditions are updated, a little. His new production of “Fiddler on the Roof,” which opened last night at the Broadway Theatre, is not a revolutionary staging. It’s just a quietly updated one. And — wonder of wonders — it’s a triumph.

Well, not really such a wonder. This has become what Bart Sher does. Starting with “South Pacific” at the Vivian Beaumont seven seasons ago and continuing with “The King and I” at the same spot last season, Sher specializes in revivals of classics that are respectful but modern, and gorgeous and lush. And if this “Fiddler” isn’t quite as decadent as the Rodgers and Hammerstein stagings — the shtetl ain’t Siam, and anyway who else has Lincoln Center Theater’s money? — it’s just as smartly reconsidered.

He’s also working with just as important a property. The original “Fiddler,” based on stories by Sholem Aleichem, with a book by Joseph Stein, music by Jerry Bock, and lyrics by Sheldon Harnick, opened on Broadway in 1964 and ran for more than 3000 performances. It was produced by Hal Prince and directed and choreographed by Jerome Robbins. The story of an Anatevka milkman and his changing world at the start of the 20th century, it has become not only an iconic piece of musical theater, with its beloved, beautiful, plaintive score, but also both a piece of Americana and a piece of Yiddishkeit. For better or for worse, it’s what many of us think of when we imagine the places our great-grandparents left behind. This is its fifth Broadway revival.

The last revival, in 2004, was too different, with a British director and a gentile Tevye. It was cold. (Traditions can only be bent so far, as Tevye’s daughter Chava, who marries a Russian and is disowned, can tell you.) For this production, Sher has cast Danny Burstein, who makes perhaps an ideal Tevye. He’s not a mugging Borscht Belter, like Zero Mostel, but he’s a subtle charmer. He’s very funny, when he needs to be, but he’s most of all human, a man in love with his daughters and trying to uphold his way of life.

If Burstein is the grounded center of this “Fiddler,” everything around him takes flight. There’s a 23-piece orchestra — a big, traditional sound being another hallmark of Sher’s revivals — and elegantly, simply suggestive set pieces that underscore the Aleichemian storybook nature of the play, without relying on the same old Chagall-styled tropes.

Sher’s biggest innovation might be the choreography; this is the first “Fiddler” that doesn’t rely solely on Robbins’s original dances. Instead, the Israeli choreographer Hofesh Shechter, in his first work for theater, his created new, explosive, sinewy dances that echo the classic Robbins moves but give them a new freshness and urgency. There is a new ecstasy to the big group numbers — hands in the air, hips thrusting, you know the drill — that points to the almost sexual nature of religious feeling, or at least underlines the similarity between the religious yearning of the traditional folks and the romantic longing of the younger ones.

The rest of the cast is as strong as Burstein, with a notably haughty and humorous Yenta the Matchmaker played by Alix Korey. Tevye’s three eldest daughters — Tzeitel, Hodel, and Chava, who one by one marry off through the show — are played by Alexandra Silber, Samantha Massell, and Melanie Moore, all three of whom sing so beautifully that you’ll spend most of “Matchmaker, Matchmaker,” arguing with yourself about whose voice is best. The one discordant note, oddly enough, is the usually excellent Jessica Hecht, who plays Golde, Tevye’s wife, as an unfunny shrew with an accent unmatched by anyone else in the show.

The mostly happy musical ends, of course, mournfully, with the Jews forced to flee Anatevka. The villagers, chin up, try to make the most of it, filled with plans for America, for Jerusalem. In the final number, they slowly march out — even more heartbreakingly, because we know so many of them will be murdered just decades later. Sher has staged the scene when the Jews learn they’re being evicted inside Tevye’s barn, the first time we’ve been there, a hulking set piece of black wooden bars. It looks like a concentration camp, and that sense of what the future holds for these people is made even more foreboding.

It also makes a fine setup for Sher’s other major innovation. He has added a framing device to this version of “Fiddler,” with Burstein, in modern dress, approaching the Anatevka train station at the start of the play, book in hand. He is, we are to believe, a younger Jew, maybe Tevye’s descendent; he is us. At the end, he pulls back on the modern clothes and joins Golde, and the kids, and the Jews of Anatevka in pulling their cart away from their home or else into the future. It’s a small but powerful, emotional moment — one that, depending on your politics, argues either that we’re all refugees or that Jews will always be persecuted.

Some very clever person from the UJA placed a big ad in the Playbill, asking for donations. Tradition.

Don’t Mess (Too Much) With Tradition: Updated ‘Fiddler’ a Triumph