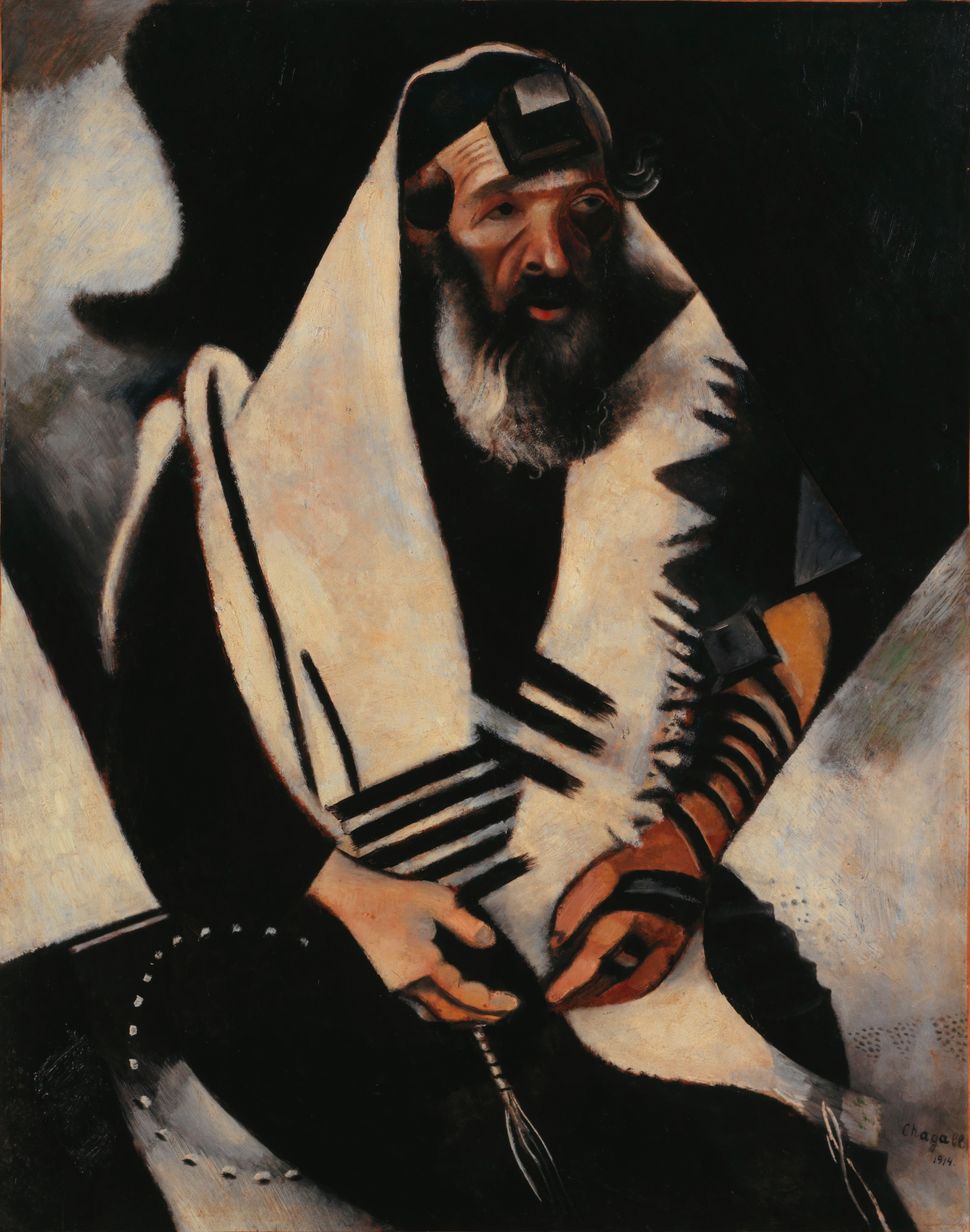 Marc Chagall's "Jew in Black and White." Image by Courtesy of Phillips Collection 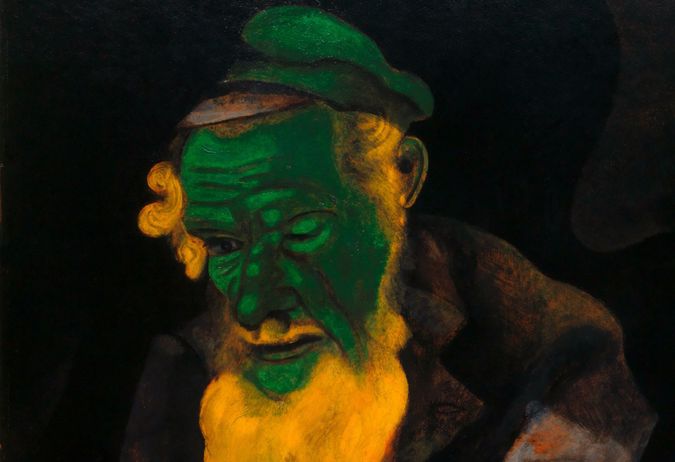 At Art Basel in Miami a few weeks ago, it rained a lot, and some critics scorned the commercial excess with extra sharpness. For Basel art in Washington on a recent morning, the sun lit the season’s last leaves and intimate galleries showed rarely seen paintings. A room devoted to Chaïm Soutine and Marc Chagall felt like a Jewish neighborhood, with three Chagall portraits that haven’t been seen in America for 40 years.

Time is short, so no more riddles about Basel: The city where Erasmus died, a chemist took the first LSD trip while riding his bicycle, and the Rhine makes a lazy, looping turn through a landscape of borders has sent more than 60 paintings to the Phillips Collection, in Washington, D.C. The show, “From Gauguin to Picasso: Masterworks from Switzerland, The Staechelin and Im Obersteg Collections” features some of the biggest names in art (including a 20-year-old Picasso’s portrait of “The Absinthe Drinker,” a lady who looks blue in every way), and that room for Chagall and Soutine is worth a lot of effort to see.

But the Swiss who warmed to work by some younger Russian-Jewish émigrés, among them Chagall and Soutine, was Im Obersteg. The show includes three Chagall portraits, two downcast beggars, a rabbi dressed for prayer, and a mask-like self-portrait never seen here before. The Soutines are four portraits and two still lifes, 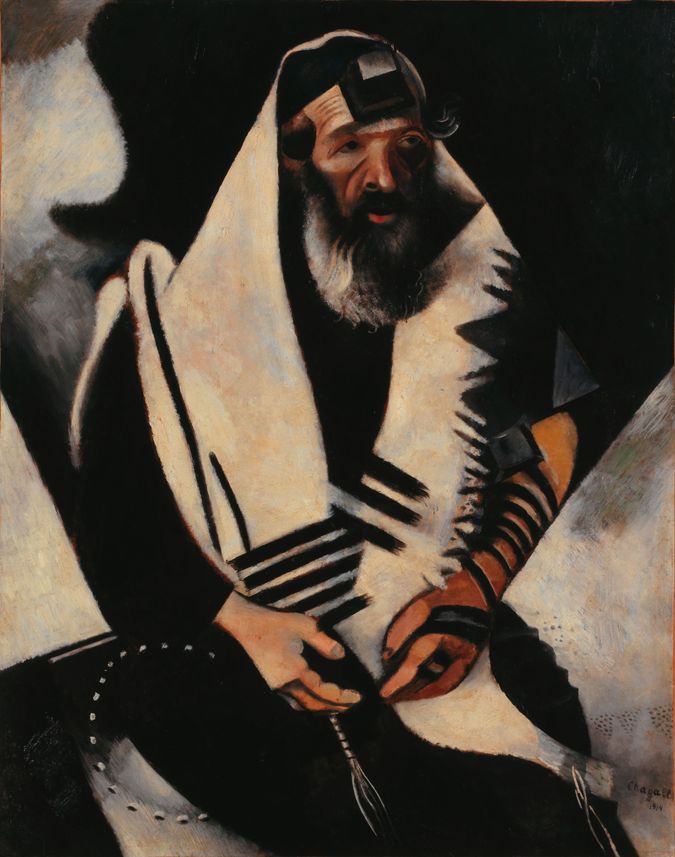 Image by Courtesy of Phillips Collection

Art historians call the band of artists who embraced Soutine and Chagall the School of Paris. Most were not Parisian. Almost all were Jewish. They included Amedeo Modigliani, the sculptor Jacques Lipchitz and the painter Jules Pascin, born Julius Mordecai Pincas. How fully this was a Jewish art world within Paris, underrecognized for its ethnicity, is getting a new look in a book called “Shocking Paris: Soutine, Chagall and the Outsiders of Montparnasse,” by Stanley Meisler.

Meisler, the former L.A. Times Paris correspondent, tours the marginal world of the group and asserts its centrality. Deborah Solomon wrote in The New York Times that the book “offers a fresh and moving account of the origins of modern art by shifting the perspective from Picasso and his merry band to a group of exiles who conversed in Yiddish.”

Meisler is a detail-addicted reporter following a hunch about history. He’s distantly related to Soutine, and writes that Soutine “the epitome of the impoverished, poorly educated shtetl boy,” endured scorching stomach ulcers and that his social awkwardness stood in contrast with Chagall’s instinct for “how to cultivate friends with influence.”

Meisler also studies the art of the School of Paris, and turns skeptical about some critics’ efforts to draw hints of Jewishness from Soutine’s work. The writer lives in Washington, went eagerly to the Phillips show, and was startled by what he saw.

“I hadn’t seen any of it before,” Meisler told me. “I thought the Soutines were particularly good, and the Chagalls I hadn’t seen before. They were unusual, very good.” In his book, he paints portraits of them: “No two Russian Jewish painters on Montparnasse were as different as Marc Chagall and Chaim Soutine,” adding that “Soutine did not engage with symbols and delve into the wealth of Jewish folklore in the Pale of Settlement. Chagall never painted portraits with distorted features.”

At the Phillips, however, he did see Chagall portraits that, if not distorted, are strongly subjective. There are no fantastic flying angel-Jews or rooftop fiddlers. All three, and the self-portrait, were painted in 1914, when the outbreak of World War I forced the artist to extend a visit to his hometown of Vitebsk, Russia (now Belarus). He painted people he knew. The model for “Jew in Green,” he said, was a local rabbi, whom he said he may have seen “as green,” because “a shadow fell on him from my heart.”

Chagall’s portraits blend the flat cutout feeling of folk art with Expressionist contours and Fauvist colors, while Soutine’s subjects look as though they’ve barely survived a fight with the reality in front of him. Both men insisted on painting what they felt instead of just what they saw, and Phillips Director Dorothy Kosinski, who co-curated the show with colleague Renée Maurer, gives works by these artists a rare chance to talk to each other.

Meisler focuses a lot on Soutine, and it makes sense because his arc was the one the School of Paris followed up and down through history. The upswing comes in 1922, when American collector Albert Barnes arrives in Paris for a “shopping spree,” enters a gallery, sees a painting by a painter he doesn’t know — of a boy pastry chef — and declares, “It’s a peach.” He buys it and about 50 other Soutines, gracing the shtetl boy with money and fame.

But the great luck for one gifted Jew lured demons. Soutine’s fame made anti-Semites in the Parisian art world aware of just who their neighbors really were. Those outsiders were redefining the world’s idea of French culture. A Parisian Jewish critic named Louis Vauxcelles — said to have invented the labels Cubism and Fauvism — called Soutine and other Jewish artists Barnes bought, “‘Slaves disguised as representatives of French art.’”

Meisler stalks evidence through attacks in newspapers and elsewhere that the Barnes windfall set off “a new gush of anti-Semitism for the Eastern European Jews of France.”

That gush faded in the 1920s, but resurged in the 1930s, smashing the School of Paris after France surrendered to Hitler. The lucky ones got out, but the Nazis murdered many of the artists, dealers, collectors and critics connected to the group.

Jacob Burckhardt pioneered the discipline of art history in Basel in the 19th century. In 1939, Staechelin and Im Obersteg took part in one of its most notorious chapters. A photograph in the Phillips catalogue shows the two men as members of an art-buying committee of the Kunstmuseum Basel, sitting beside the museum’s director at an art auction of masterpieces the Nazis smeared as “Degenerate Art.” Organized by the Galerie Fischer, in Lucerne, the sale drew buyers from Europe and America to a hotel. The works weren’t stolen from Jewish collectors, but they were peddled by the Nazis after they forced German museums to decommission them.

The Basel museum purchased about 20 pieces. Swiss curator Henriette Mentha, writing in the Phillips catalogue, reports that Im Obersteg bought none. In an essay for a groundbreaking “Degenerate Art” show at the Los Angeles County Museum of Art, curator Stephanie Barron tells how many in the art world boycotted the auction, but notes that it saved the works from probable destruction.

Letters in a glass case in the Soutine-Chagall room at the Phillips show how the warm relationship between Im Obersteg and Chagall was badly torn when Im Obersteg learned Chagall had painted multiples of the “Jew in Black and White.” Still, they corresponded before the painter fled the Nazis to New York. Chagall got papers to leave thanks to a Museum of Modern Art invitation to show his work. The legendary American refugee-rescuer Varian Fry spirited him out of France.

But Nazis destroyed the School of Paris and hounded Soutine. The 50-year-old artist evaded the Gestapo through the middle of 1943 with his last girlfriend, hid in a series of Paris apartments and then the country, where he painted despite “spasms of pain” from his worsening ulcers. The artist, in agony, was driven back to a Paris hospital where, on August 8, a surgeon was unable to save him, and he died the next morning. Picasso stood at the funeral, whose crowd was meager because “his Jewish artist friends were too frightened to show themselves in public,” Meisler writes.

Chagall lived to be 97 and “one of the most popular and beloved artists of the 20th century,” in Meisler’s words. He also writes with clarity that some critics charged the artist with shallow self-repetition, adding that he grew “avaricious, aloof and suspicious.” The retired reporter laments that the School of Paris doesn’t get much notice in America these days and that there’s been no major Soutine show since 1998.

Maybe the room at the Phillips will change that.