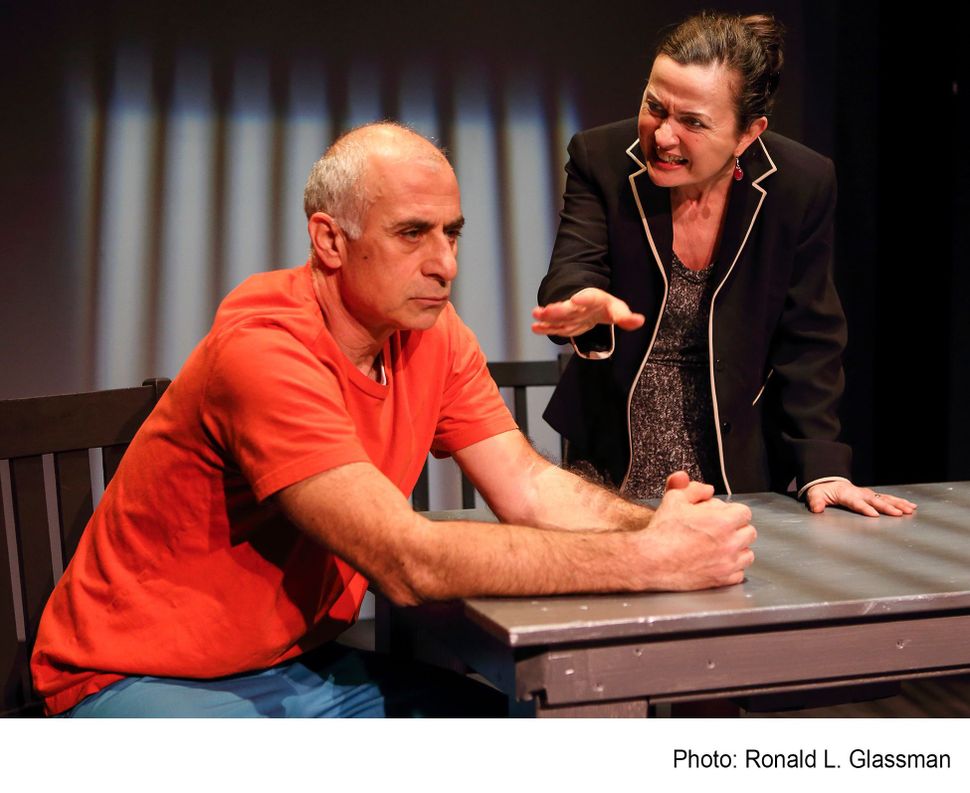 “The play has more resonance than ever,” he said. “There is a major distinction between an Islamic jihadist state and the valid aspirations of the Palestinians for their own state. No, I don’t think there’s a thin line between the two. There’s no line.”

“Land of Fire,” based on actual events, centers on the reconciliation of an Israeli woman with the terrorist who attacked her some 23 years earlier. Though she survived, others did not, including her close friend. Without fully understanding her own motivation, Yael (Dagmar Stansova) reaches out to Hassan (Mihran Shlougian), who has spent more than two decades in jail and claims to be a changed man. She in turn apologizes to him for the Israeli treatment of Palestinians.

Presented by Theater for the New City in association with New Yiddish Rep, “Land of Fire” is making its North American debut and is slated to bow in Madrid this spring. It premiered in Stockholm, moved on to London, and is currently enjoying an extended run in Buenos Aires in Diament’s home country of Argentina.

Mandelbaum knows that the subject of Diament’s drama may put some audiences’ collective teeth on edge, but it’s a topic he’s impassioned about and a work he’s wanted to do for years. It’s the first play the eight-year-old company is performing in English and marks a major departure for the troupe, whose mission is to keep Yiddish alive by adapting classics into Yiddish as well as producing well-known and obscure works originally written in Yiddish.

“I love the play because it’s about forgiveness and taking responsibility for what you’ve done,” Mandelbaum said. “And that’s what will have to happen between the Israelis and Palestinian to achieve peace. I’m convinced the majority want peace, though Israeli propaganda keeps saying there’s no one on the other side to talk to.”

Still, Mandelbaum puts most of the blame at Israel’s doorstep, asserting that the homeless and impoverished plight of the Palestinians, dating back to 1948, is the greatest moral and ethical issue that face Jews today. Indeed, he compares the Palestinian experience to his own as a refugee; he was born in Germany to Polish parents who were Holocaust survivors.

“My parents owned a home in Poland that was stolen from them and it still exists,” he said. “I won’t go visit. It’s too painful for me to see others occupying their home, and I have a life far away in New York. So, how much of a stretch is it for me to understand what Palestinians feel who may be living only 20 miles from their homes, which they no longer own?

“It is my responsibility as a human being and a Jew to deal with this subject,” Mandelbaum said. “I’ve been forced into it. [Benjamin] Netanyahu doesn’t say the ‘Israeli’ state. He says the ‘Jewish’ state. It’s also my responsibility as an artist to address it. Theater is about tikkun olam.”

Actress Dagmar Stansova says it’s the artist’s job to understand “the other,” a role she knows from first-hand experience. “I was born in Czechoslovakia, and early on, one teacher called me ‘the Jewess with the big eyes,’” she recalled. “When we lived in Israel, the kids threw rocks and called me ‘Communist!’ When we moved to Brooklyn in the ’70s, I was called ‘white girl.’ When I got to L.A., I was the ‘ethnic actress.’”

During an interview, Stansova also recalled an experience that paved the way for her to understand Yael’s need to forgive the terrorist. The actress was attacked by two gang members in Los Angeles who, screaming at the top of their lungs and with crowbars in hand, were trying to break into her car while she sat there terrified until a Good Samaritan couple pulled up in another car and the two thugs ran away. The muggers’ rage was palpable immediately, but in the aftermath, Stansova also felt their tremendous pain and was ultimately able to forgive them.

“Now I would like to have the chance to speak with them face-to-face,” she said. “I am not sure that Yael really forgives Hassan, or that she’s in a position to do so, but her reaching out to him, it’s the tiniest gesture of reconciliation and her way of saying ‘we’re two faces of the same problem.’”

“Land of Fire” is a polemical play and not for all tastes, especially for those theatergoers who do not buy into the notion that there is any parity between the plight and/or the history of the Israelis and Palestinians, though the play certainly argues that point.

The play’s creative team also believes the Holocaust has become the convenient excuse for all of Israel’s actions in the occupied territories. “Jews do not have a monopoly on suffering,” said Mandelbaum. “What is the difference between one mother who lost a child on one side and a mother who loses her child on another? Is one mother more entitled to say I suffered more because I was a victim of the Holocaust?”

“Suffering cannot be quantified,” said Diament. “There is nothing in world history that compares to the Holocaust. It was the greatest atrocity in an atrocious century. Still, to what extent does suffering prevent you from inflicting suffering on others? In the case of Israeli occupation, it hasn’t. Israeli presence in occupied territory is horrible.”

Diament, who lived in Israel for seven years — he was a soldier during the Six-Day War and served as a correspondent during the Yom Kippur War — said in the beginning he had no doubt that justice was on Israel’s side, though those sentiments changed in the wake of the Lebanese War.

It has been a painful journey for him, not least expressing his criticism in a dramatic work. He has attempted to voice all viewpoints, and in varying degrees, each character embodies an artistic and political conflict for him, most pointedly Hassan.

“By building the terrorist’s argument, I had to deal with unpleasant truths,” he said. “But you know the story about the Golem? We create the Golem with the idea that it will defend the Jews of Prague. To keep the Golem alive the word, ‘emet’ — truth — is written on its forehead.”

Veteran director Moshe Yassur may be the voice of reason in the din. Keenly aware that some theatergoers may view the play as an expression of ignorance or betrayal or self-hate (or all of the above), the Romanian-born Holocaust survivor, who served in the Israeli army, says that Israel is very strong, with the greatest army in the Middle East, and can afford to take the criticism without feelings of vulnerability to further assault.

“It’s also strong enough and rich enough to extend a hand to its neighbor to live on the earth and not kill each other and live under it,” he said. “I’d like audiences to leave the theater thinking, not feeling. There are far too many feelings on both sides. That’s why reconciliation can’t take place. Both sides feel wronged. It’s time to step back and think.”

Simi Horwitz is a frequent contributor to the Forward.