Can a Dry Country Like Israel Quench the World’s Thirst? 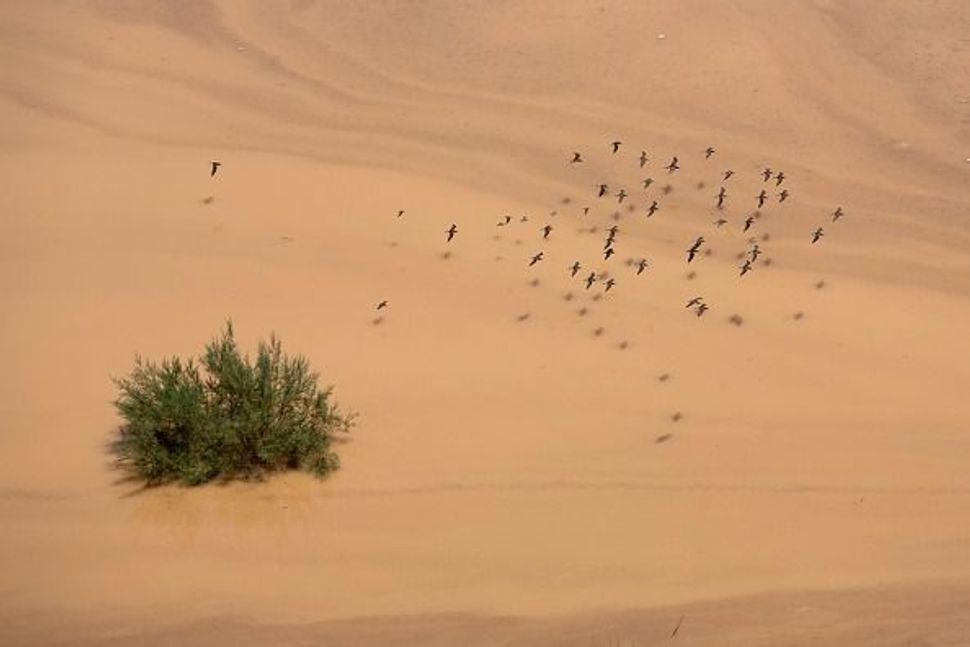 Water: the sign of salvation, the portal to purity, the source of simcha. It is an inescapable part of Jewish practice, a recurring motif throughout the religious life of a Jew. Jews beseech God daily to make the winds blow and bring the rainfall in its proper time, Jewish women immerse themselves monthly in cleansing ritual pools, the principal festivals are geared toward gratitude for the sustenance water provides. The original Judaism — that of the Bible — was constructed most immediately for an agrarian economy and therefore concentrated around water: The eyes of Israel were toward the heavens, and thus to Heaven. This point is easily forgotten after millennia of Jewish exile from the nation’s land. But the Jewish return to that land over the past century has restored a real-world meaning to these words and practices. Even in a developed economy (like modern Israel’s) and especially in an arid country (like Israel), water provision is still nothing short of wondrous.

It is with that wonder that Seth Siegel approaches the hydro-exploits of the State of Israel in “Let There Be Water.” Siegel is a lawyer by training, serial entrepreneur and PR guru by profession, and a foreign policy expert and activist in the Jewish community to boot. But when it comes to the subject of water, he has the advantage of being a layman. His wonder is ours. Betraying his amazement, in acknowledging his family he thanks them for putting up with the unending flow of stories about water to which he subjected them; any reader of his book will empathize with him.

Siegel devotes an entire delightful chapter to reflecting on the centrality of water in Judaism and how this was reformulated in modern times by classical Zionist literature and Israeli songs, culture and even national stamps. Not only is water celebrated in Israeli society, but its preservation is also portrayed as heroic: Schoolchildren are taught from the youngest age of the need to save every last drop. The need for individuals to jealously monitor their water usage pervades the Israeli psyche, but it is hardly the extent of Israelis’ efforts to achieve water independence in their desert country. Instead, Israel pursues an “all of the above” strategy, variegated elements of which Siegel addresses in chapter after chapter.

Israel diversifies the sources of its water: Natural water is pumped from the Sea of Galilee and aquifers; rainwater is captured and reused; rain clouds are seeded; sewage is treated; deep wells are dug to retrieve brackish water (salty freshwater); and seawater is desalinated. Siegel attends in detail to several of these developments, particularly the pumping of natural water and the remarkable story of Israel’s National Water Carrier, a system once considered implausible but that is, in fact, hugely successful: It transfers water from the north to the dry south of the country, enabling Israel to become the only country where the desert has receded, He also describes how Israel is a world leader in the treatment of sewage and desalination, on both of which Israeli agriculture relies.

Israel also tries to limit water usage: Drip irrigation (invented in Israel) is widely employed; seeds are developed that can thrive in saltier water, and other water-efficient crops are grown; landscaping parks and homes with freshwater is discouraged; and, above all, real pricing of water is imposed. Real pricing of water is, Siegel notes, unusual. But in Israel it is part of an impressive economic balance in which water is, on the one hand, owned by the state (as soon as rainfall hits the ground, it belongs to the government), but, on the other hand, sold at a price reflecting the actual cost of drawing or manufacturing it. Therefore, whereas in most countries, water is heavily subsidized and is therefore cheaper, in Israel the higher cost means more efficient (i.e., lower) usage by industry and the public.

Finally, Israel minimizes water waste: Appliances are hyperefficient (any visitor to Israel will notice, for example, that the toilets are all dual-flush toilets, which Israel was the first country to mandate); advanced technology is used to detect leaks in water infrastructure quickly; financial incentives are offered for water-saving technologies; and Israel’s water industry is overseen by localized technocrats with reliable income (revenue from water sales) that is dedicated solely to improving water provision.

“Let There Be Water” is a book about water— water! — and in this respect, it is remarkable for its readability. One might have thought that this would be an intimidatingly technical or even boring book; on the contrary, it is an easy and engrossing read, a series of stories about Israel’s relationship to water in the past and present. Especially enjoyable among these stories are those about individual pioneers in the Israeli water industry, such as Simcha Blass. He’s the man who developed Israel’s National Water Carrier, which originated in the 1930s as a “fantasy plan” to convince the British, who then ruled the area, that the land could sustain more Jewish immigration. As if conceptualizing and designing Israel’s most impressive infrastructure project (one that cost more per capita than the construction of the Panama Canal) weren’t enough, after he retired, Blass invented drip irrigation, revolutionizing world agriculture. Siegel is right to suggest that if the world were a fairer place, Simcha Blass’s name would be more widely known.

But “Let There Be Water” is also, principally, a book about Israel. In this respect, it is refreshing that Siegel avoids too great a focus Israel’s conflicts, to which so many other titles attend. He does include some discussion of this, however, and it is illuminating. Whereas it is often lamented that the main parcel of land the United Nations deigned to award Israel in its 1947 Partition Plan was the barren Negev desert, Siegel shows how there was resistance even to giving that. It was the vision of David Ben-Gurion, who wanted to make the desert bloom, and the Zionist leadership’s determination to create facts on the ground in the night following Yom Kippur 1946 (a thrilling story) that secured the Negev for the Jews. Siegel also discusses coordination among Israel, Jordan and the Palestinian Authority over water. Unfortunately, the Palestinian Authority is increasingly treating water as a relative sum game with Israel, opting to make trouble even if it causes harm to its own people as long as it might cause greater harm to the Israelis. Siegel also briefly mentions historic efforts by Arab states to deprive Israel of water. These efforts came to nothing, but they were significant because they represented the reasonable Arab belief that water is the key to life and therefore to Israel’s future, but also the Arabs’ unreasonable desire to arrest that future.

The book’s subtitle, “Israel’s Solution for a Water-Starved World,” regrettably introduces an apocalyptic undertone, which seems unnecessary given that Israel’s hydro accomplishments in themselves equal its military, technological and sociological triumphs. But perhaps that undertone is an unavoidable necessity in marketing a volume on a topic that consumers might not generally consider especially urgent. And it’s not just urgent, but also widely relevant: Siegel shows how California and much of the western United States — places that have suffered from water shortages — could and do learn from Israel. As well they should: Only about a billion people have constant access to high-quality water, but whereas most of them live in humid areas such as North America and Europe, Israelis, thanks to enviable ingenuity and tenaciousness, have it in the desert.

Jonathan Neumann is a freelance journalist who writes on politics and religion.

Can a Dry Country Like Israel Quench the World’s Thirst?