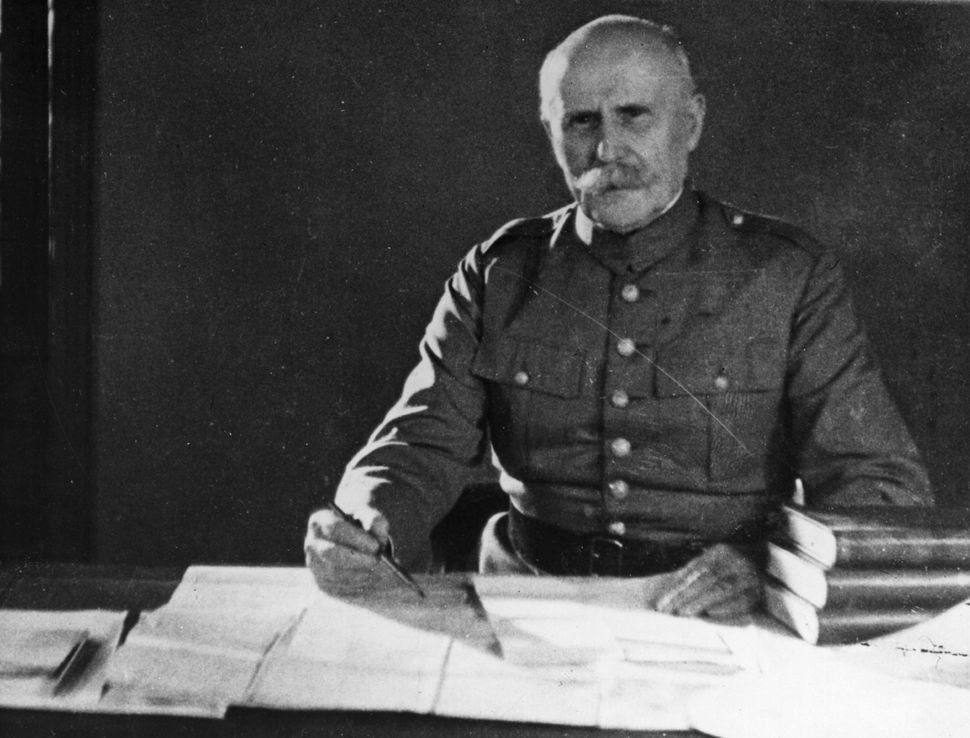 The French Jewish author Henri Raczymow, born in 1948, has written books combining a fascination with family, literature, and history. From “Heinz,” about his uncle who was murdered at Majdanek concentration camp, to “Swan’s Way,” about Marcel Proust’s character Charles Swann, Raczymow offers personal insights into expressions of Judaism. His latest book, “Emmanuel Berl’s Melancholy” reflects on the French Jewish essayist Berl (1892–1976) who wrote Marshal Philippe Pétain’s speeches in 1940. Pétain used them to rally support for the collaborationist Vichy France government during the Nazi Occupation. Recently, “The Forward’s” Benjamin Ivry spoke to Raczymow about Berl’s complex legacy.

Benjamin Ivry: Emmanuel Berl wrote some of the most resonant phrases uttered by Marshal Pétain, including “But soil does not lie” and “I hate the lies that have harmed [the French people] so much.” So Berl’s literary talent is one reason these notorious speeches are still remembered?

Henri Raczymow: Yes, [Berl’s] literary talent was unquestionable and he was a great journalist. He knew everyone in the Vichy government, all the politicians, and above all was a pacifist because of his experience fighting for one year in the trenches in the Marne during the First World War. He emerged with the feeling that there should never be another war, like many of his generation, and he remained a pacifist until the following war. The Nazi danger did not make him change his mind.

In his book of conversations (1976) with the novelist Patrick Modiano — later a Nobel Prize-winner — Berl admitted he had never hesitated about writing speeches for Pétain, adding: “Since then, I’ve been blamed to the point that I ask myself if there is some problem.” Berl really saw no problem?

I think Berl was being insincere when he said that. He was lying to himself. He knew very well that there was a problem because of what happened between 1940 and 1944. He meant to say in June 1940, he was for the Armistice and peace, ending the fighting. Because he was Jewish, by the end of July 1940, he started to see that he couldn’t stay [in Vichy with the collaborationist government] because it could be dangerous. He left and went into hiding.

Berl told Modiano that in high school, when other students yelled “Down with Jews!,” he would “answer with a punch and we would walk away, arm in arm.” Was this his way of befriending anti-Semites?

That’s right. It’s a complex question, revealing what French Jews were like before the war, and Berl himself. Having anti-Semitic friends was no problem for him. Many Jews were like that. Anti-Semitism [in France] from 1910 until the Second World War was widespread, banal, and commonplace, so in speaking to Modiano, Berl minimized the importance of anti-Semitism as if to say it wasn’t all that serious.

When the French Jewish journalist Jean-Paul Enthoven wrote of Berl’s “affinity for vanishing,” was he referring to the writer’s vanished identity as an assimilated Jew?

No, it isn’t exactly that. Berl disappeared as an individual, He felt self-hatred, but that doesn’t necessarily mean hatred of himself as a Jew. He never denied he was Jewish, but did not like himself as a person, because of his mother, his past, and other factors. Berl had no drive to be a great professor or linguist because he did not want to fulfil his mother’s expectations.

What separated Berl’s collaboration with the Vichy regime from the collaboration of Maurice Sachs, another French Jewish writer about whom you have written?

That’s an interesting, rather complex, question. Both belonged to a Parisian Jewish milieu, were more or less of the same age, but very different. Sachs was a dandy, always needing money and requiring luxury at any price. He spent his life seeking comfort and luxury and so as a totally amoral opportunist, he worked for the Gestapo. Berl came from a wealthy family with a private income, so had no need to compromise himself.

In France today there seems to be a fascination with Jews who did unfortunate things during the war either to survive or out of iniquity, such as the French Jewish iron supplier Joseph Joanovici, who supplied Nazi Germany and the French Resistance, and recently became the hero of a series of six illustrated books. Why this sudden interest?

First of all, it must be said that these Jews are very much in the minority. There are two reasons: the Vichy period is a relatively recent obsession for the French, only since the 1980s. Also, perhaps because the French think that not everything is black or white, there are grey areas. In Vichy, there were not only collaborators and resistants. There was a marginal group of people who changed from one side to the other. There was a range of wartime attitudes, even among Jews, and different strategies. Some Jews hid, while others became involved in the armed resistance. Berl was special. In the village where he was hidden in the Corrèze region [of south-western France] he was a friend of Vichy collaborators and also of Resistance members.

Berl claimed to be offended by the anti-Semitism in André Gide’s “Journals,” yet he was friends with vastly more anti-Semitic writers such as Pierre Drieu La Rochelle, Paul Morand, and Jean Giraudoux. Was Berl simply oblivious?

The reasons are complex. As an anti-Semite, Gide is nothing at all compared to Drieu, completely kosher so to speak. Drieu was a swine. The enigma is that Drieu published a novel “Gilles” in 1938 and Berl read it, seeing his own depiction as the Jewish character Preuss. In Berl’s place, I would have been upset [at such a portrayal], but Berl continued to see him. The same for Morand, who wrote frightfully despising things about Berl, but Berl saw nothing amiss. Did he want to see nothing or did he consider it of little importance? For me, the explanation is psychological. Berl was one of those people who need to be loved at all cost. When you want to be loved at all cost, you are ready to put up with anything.

In 1956, Berl wrote, “Since Hitler, I find all anti-Semitism intolerable. But Drieu’s was particularly unacceptable.” What did he mean?

Before Hitler, many people thought that some forms of anti-Semitism were tolerable. There is the phrase of [French Catholic author] Georges Bernanos that Hitler had “dishonored antisemitism,” as if before the war, antisemitism was something honourable and Hitler was the one who spoiled it.

**After the Six Day War, Berl wrote “Nasser As He Is Praised” (1968) to react to criticisms from General de Gaulle and others about Israeli aggressiveness. Berl states that it is possible to be anti-Semitic without being anti-Zionist, but not the contrary in a world where only governments can protect people. **
When I read this book, personally I was rather happy to see that Berl had written it. This exactly what the majority of French Jews believed during and after the Six Day War. Namely, that Nasser wanted to destroy Israel and a second Holocaust was threatened, so Israel had a complete right to defend itself. From this point of view, Berl seemed quite correct. [The French political scientist] Raymond Aron, who otherwise was not at all like Berl, thought the same.

You mention Berl’s visit to Marcel Proust, when his host threw slippers at his head. What went wrong?

They disagreed about love. Berl had a traditional romantic view of love and friendship and Proust did not believe in love. Proust believed love was an illness, like catching a virus from which you suffer until one day you are cured. That is the Proustian conception of love. Berl believed the exact opposite. Even for friendship, Berl and Proust both had lots of friends, but while Berl retained his friends, Proust could quarrel with them. If someone told Proust that he wrote badly, he could not accept that, whereas Berl would remain friends with the person.