The Jew as Not-So-Other at Yiddish New York 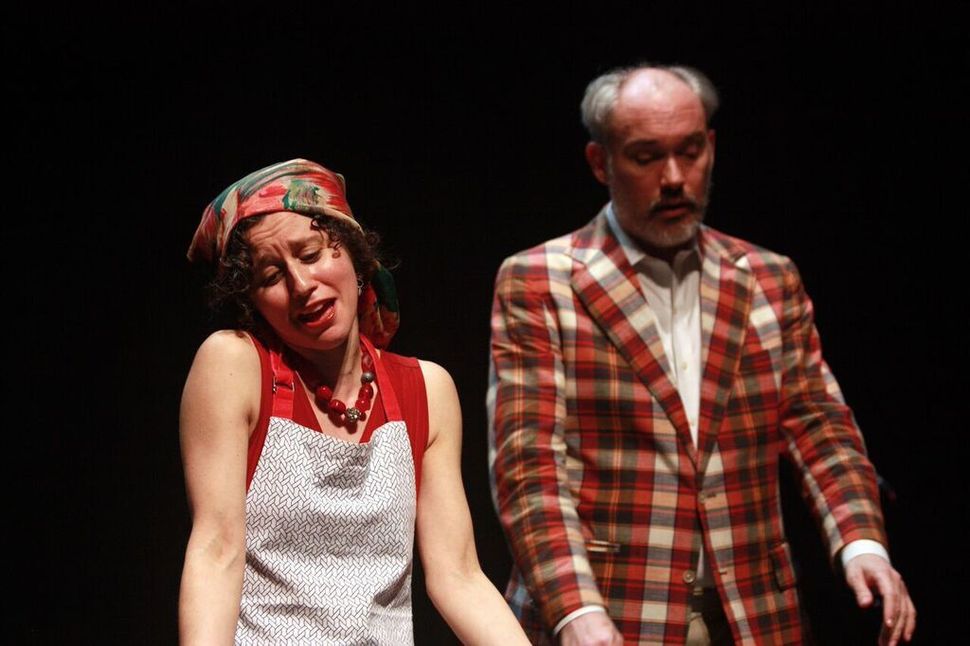 “The Jew as Other” is a theme running throughout the programming of this weekend’s Yiddish New York festival, a first-time event intended to perpetuate the decades-old annual Christmas-week gathering in the Catskills of Yiddish newbies, wannabes, and experts that was KlezKamp, which had its final incarnation last December.

But “The Jews as Other” is fertile territory for art, theater, music, and humor, and so even if it wasn’t quite intended as such, it keeps popping up in Yiddish New York events. It is the actual title (with an additional “the,” as in “The Jew as the Other”) of the festival’s juried art exhibition, which opened Wednesday at the Abrazo Interno Gallery at the Clemente Cultural and Educational Center, 107 Suffolk Street, and runs through Wednesday, December 30, and is most definitely worth a visit to see how a panoply of painters, illustrators, photographers, sculptors, and a video artist variously approach their assignment.

The theme is consciously or otherwise embedded in much of the weekend’s daytime programming, consisting of lectures, workshops, classes, films, and walking tours taking place in an around the 14th Street Y. You can’t get away from it in programs such as “The Hasidic World,” a three-part lecture series exploring Hasidic life and music in the modern world; in a four-part program on Yiddish theater in which a half-dozen theater professionals focus on the foundational aspects of creating and performing Yiddish theater in a contemporary, predominantly non-Yiddish speaking world; and even in a Nature Walk through the Lower East Side, conducted in Yiddish by Itzik Gottesman, of the University of Texas at Austin.

On Friday night at the Y, theatergoers were treated to a contemporary version of an old-fashioned evening of Yiddish vaudeville, which mixed skits, schtick, gymnastics, song, dance, storytelling, comedy, or, as emcee Shane Baker described it, “a little song, a little dance, a little seltzer down your pants.” And yes, all three took place. A Yiddish actor (a star of the New Yiddish Rep’s Yiddish version of Samuel Beckett’s “Waiting for Godot”), monologist, magician, song and dance man, by day Baker is director of the Congress for Jewish Culture. By night he is everywhere Yiddish is taking place — I saw him last year in Toronto performing his one-man show, “The Big Bupkis,” a guide to the great tradition of Yiddish vaudeville, which has been a huge influence on both the Broadway musical and the TV sitcom. Chances are he knows more Yiddish than you and me put together. All this, from a Kansas City, Mo., native who grew up as an altar boy at St. Andrew’s Episcopal Church.

In other words, the very incarnation of “the Jew as other.”

Baker was aided and abetted in this evening of Yiddish cabaret by, among others, singer-actress Miryem-Khaye Siegel and New York Times bestselling author, Michael Wex (“Born to Kvetch”), who delivered an original Yiddish country & western song, just one of many results of having been raised as one of the only Jews with forelocks within a thousand-mile range of Lethbridge, Alberta, Canada, where, he told us in a Beat poet-style monologue about his upbringing, he was “scattin’ my daily page of Talmud to ‘A Night in Tunisia’,” a reference to the Dizzy Gillespie bebop jazz composition made famous by Charlie “Bird” Parker. Again, the very definition of “the Jew as other.”

Even in this most Jewish city of New York, at Christmastime we are made to feel as “the other,” consigned as we are to hiding in the darkness of movie theaters and eating Chinese. This time around, however, we are being given the opportunity to explore that otherness with kinsmen at Yiddish New York, which could prove to be yet another small step toward recovering and perpetuating our linguistic and socio-cultural identity.

We still may be “other,” but at least we’ll know a little more about what that means, and how we can use that otherness to construct a more informed and perhaps creative identity.

Seth Rogovoy frequently writes about Yiddish arts and culture for the Forward.

The Jew as Not-So-Other at Yiddish New York