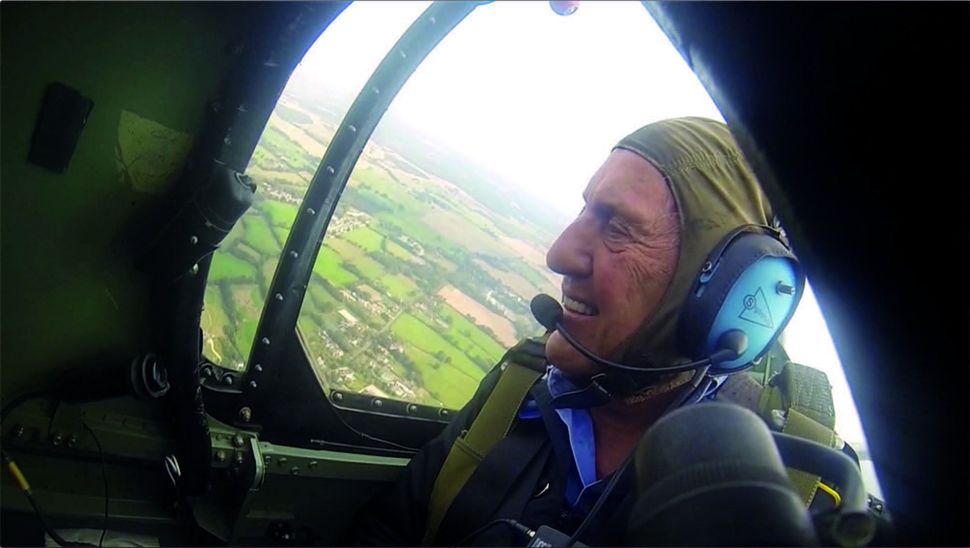 Image by Courtesy of Frederick Forsyth

The latest book from Frederick Forsyth — author of bestselling espionage thrillers like “The Day of The Jackal,” “The Odessa File,” and “The Dogs of War” — is a bit of a departure for the 77-year-old author.

“The Outsider” is a memoir, and it turns out that Forsyth has led a life every bit as eventful as those of his fictional characters. Forsyth counts among his previous jobs RAF pilot, journalist, foreign correspondent, novelist, and occasional spy.

Forsyth was raised in Kent, on the southeast corner of England close enough to occupied France that he was briefly evacuated in 1940 to safety, away from what many feared was an imminent German invasion.

His father ran a fur shop. “Back then, before PC, every woman wanted a fur coat,” he told the Forward. “Even small towns had fur shops. The fur trade was dominated from the East End of London, the Jewish area, where the great fur traders from Leipzig who’d fled Hitler, had set up businesses.

“My father needed fur coats to put in his window to sell. He made contact with all these fur shops. He couldn’t afford to buy the coats outright. So they let him take five or six [on consignment] and return those he didn’t sell. They were very kind to him and to me and a boy. I remember them with the [payis] down the side of their faces and their black hats. They were very nice people.”

What made an even greater impact on Forsyth’s dad, also named Frederick, was a film he saw towards the end of the war.

“The news of the Holocaust was just coming out,” Forsyth recalled. “He was called to London and had to sit in a studio and watch these ugly pictures out of Bergen-Belsen. He just had a soft spot in his heart for Jews because of the way they treated him and the way they were treated.”

As Forsyth was to learn later, that feeling towards Jews was not universal in British society, particularly in some of the upper levels of the civil service.

Meanwhile, it was the senior Frederick’s military service that set his son’s career course. An officer, he had business at a nearby air base and took his five-year-old along. While he worked, he turned the care of young Forsyth over to some pilots, who playfully placed him in the cockpit of a Spitfire, after which Forsyth became determined to become a pilot.

Eventually, Forsyth gained entry into the RAF flight school and, at age 19, became the service’s youngest pilot ever. But by then, post war austerity limited his options. When it became clear that becoming a fighter pilot was not one of them, he decided to become a foreign correspondent.

That career started with a three year internship at a local newspaper followed by a job with the Reuters news agency in London. Not long after he began, though, the deputy chief of the Paris bureau was taken ill. Because of his faultless French (he’d also mastered German, Russian and Spanish), he was assigned there.

It was May, 1962, and Charles DeGaulle was targeted for death by dissident elements of the military — known as OAS — upset that he’d promised to free Algeria. Forsyth’s job was to cover the French President’s every move, which soon convinced him that security was so tight that the only way anyone could get to DeGaulle was a highly trained sniper. And if that sounds at all familiar, it is the seed for what later became “The Day of The Jackal.”

Forsyth regularly mined his journalism experience for his fiction. In Africa, his coverage of the Nigerian Civil War for the BBC served as the basis for “The Dogs of War”; his time in Berlin inspired “The Odessa File.”

A major problem Forsyth encountered in Africa was, he says, that the British Foreign Office had it all wrong. What he saw on the ground was 180 degrees different from what the Foreign Office was touting in England: that the war was going to be a brief two-week affair. Instead it took several years to conclude and resulted in a famine in Biafra that killed over a million people.

Forsyth was never a fan of the Foreign Office, convinced it was filled with incompetents and anti-Semites.The latter, he said “was a tradition and goes back to St. John Philby, advisor to Ibn Saud and of course [T.E.] Lawrence and the Arab uprising.”

Forsyth refers to the period around World War I when the Brits encouraged Arabs to rebel against the Ottoman Empire and Philby hoped to install Saud as leader of one Arab nation that covered most of the Middle East.

“I think a lot of those mandarins — meaning senior civil servants — appreciated the attitude of deference from the [Arab] lower classes, who bowed to sheiks and muftis. Those fancies appreciated that.

“Jews tended to answer back and that wasn’t at all an attitude liked inside the foreign office. We were the British after all. We installed Saud and then King Abdullah. Meanwhile Jews like Chaim Weizmann and David Ben-Gurion were in New York making trouble with the newly founded U.N. And that didn’t receive the approval of these snobs.”

“But there was an unawareness of what was going to happen. The thinking was this was going to be wine and roses all the way. The young Israelis I met then had no idea of the complexities of governing another race. We British had that experience.”

On the trip he met a number of prominent Israelis and got to spend time with Ben-Gurion, who “was one of the greatest men I ever met.”

“What struck me about him was that you’d think a man who’d fought that hard and that long against Palestinians would dislike them. But he didn’t. He and the members of his pre-Sabra generation didn’t have the hostility a lot if young Israelis have today.”

On his last night in Israel, at a Tel Aviv bar, he met a group of Israelis, including Yael Dyan, daughter of war hero Moshe. “They didn’t appear to be anti-British. They said ‘you were bastards, but at least you were polite bastards.’ Their real animus was actually for their own fanatics.”

Throughout the evening, someone eyed Forsyth from a corner of the bar and eventually pulled him aside: “I have a confession to make.” He told Forsyth he was the man who drove the bombs into the King David hotel in 1946 that killed close to 100 people and injured many more.

“What he was really keen to tell me is that he made a phone call that warned a junior British officer of the bomb, but he thought it a hoax and poo-pooed him.” Since then, the subject of whether or not a warning had been issued has been the subject of some controversy.

“I asked why not tell them” — pointing to the Israelis he’d been drinking with. “‘They’d probably kill me.’ he said. Why tell me? ‘Because you’re British and a Gentile.’”

Forsyth never understood the connection, but there it was. He left Israel the next morning and returned to Africa.

Forsyth’s novels have gone on to cover such varied topics as the international cocaine trade (“The Cobra”), mercenary soldiers in Africa (“The Dogs of War”) and nuclear terrorism (“The Fourth Protocol”). If there is a leitmotif to his life it is “curiosity,” Forsyth says.

“I must have been born with it. If it see a lock box, I have to open it. It’s gotten me into scrapes and sometimes gotten me out of them. I just have to find out what the (heck) is going on.”