Rediscovering the Author Who Was Dismissed as a Stalinist Harpy 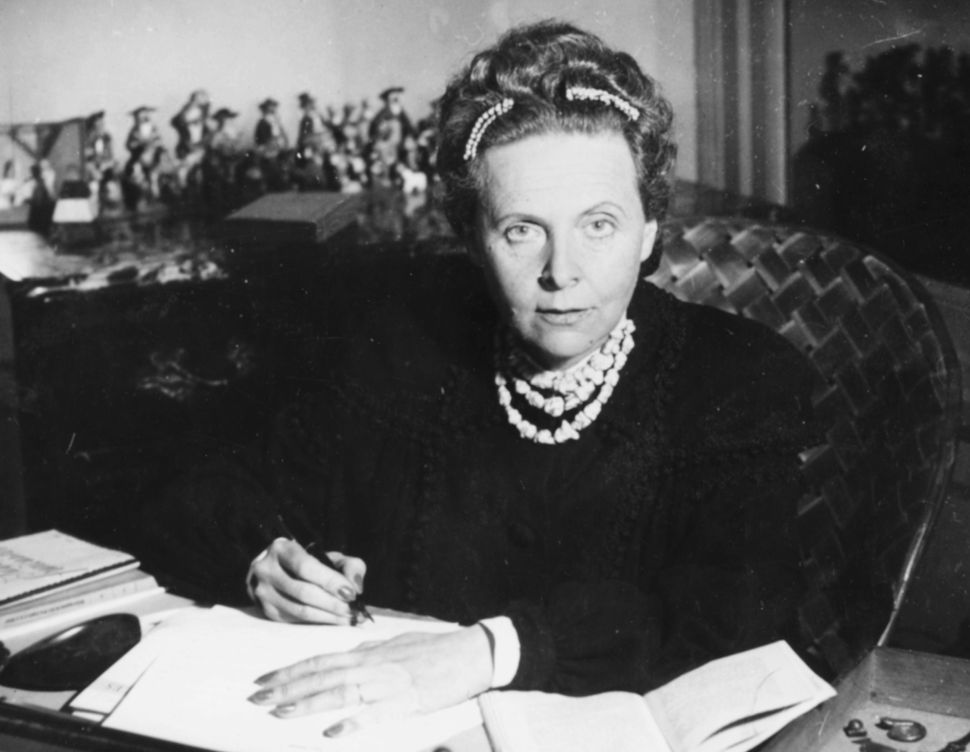 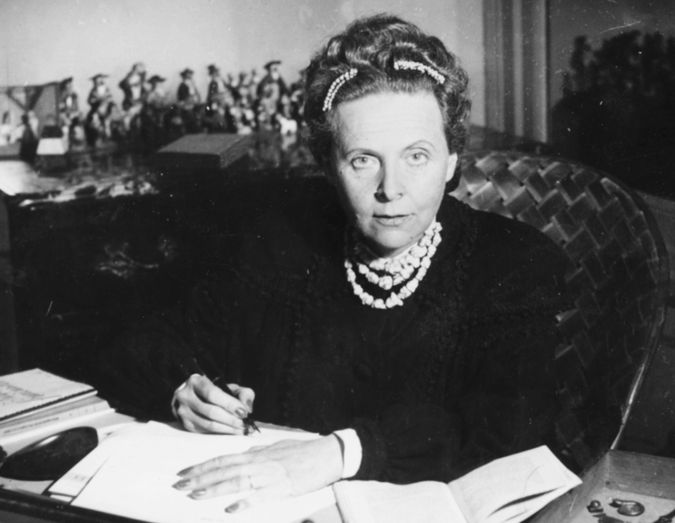 The French author Elsa Triolet (1896–1970), born Elsa Kagan to a Russian Jewish family, has been decried by some critics as a Stalinist harpy. This year, “Le Figaro Magazine” faulted Triolet’s “steely egotism and and equally unerring political blindness.” Triolet and her husband the poet Louis Aragon were devotees — sometimes partially critical ones — of the Communist Party. A recent biography of Aragon from Les éditions Gallimard is a fresh, even-handed look at the couple. Its author, Philippe Forest, a professor of literature at the University of Nantes, recently spoke with The Forward’s Benjamin Ivry about revising the image of the famed French literary couple.

Benjamin Ivry: In her book on Elsa Triolet, Huguette Bouchardeau states that the idealized romantic mythology created by Aragon in his poems inspired by Elsa was a “negation of her humanity.”

Philippe Forest: I wouldn’t go that far, but Elsa Triolet did suffer a lot from the myth that Aragon built around her, psychologically and also in the way her works were received. Today almost no one considers her an important writer.

Bengt Jangfeldt, in his biography of the poet Vladimir Mayakovsky, whom Elsa was close to, wrote that she insisted on leaving Russia after the Revolution, since she came from a wealthy family and did not enjoy hardships in post-Revolutionary life.

From the reports we have, Elsa Triolet was reticent and even hostile about Communism at the start of her life. In the 1920s, she told a friend that she considered the Bolshevik Revolution to be a total catastrophe. That would explain her leaving. She also had trouble accepting the relationship that began between Mayakovsky her sister Lilya Brik, as she was also in love with him.

In Aragon’s novel “Riders on a Double-Decker Bus” (1942), Georges Meyer, a sympathetic Jewish mathematics teacher is the reverse of anti-Semitic caricatures of the time. Before meeting Elsa, Aragon was in love with Denise Lévy, an Alsatian Jewish woman, and spent time with the critic Jean-Richard Bloch. Why this pronounced sympathy for Jews?

I have no idea, but one should ask instead why this antipathy for Jews among most other French writers of his era? Aragon was completely opposed to all forms of anti-Semitism which separated him greatly from other writers of the same epoch.

Still, Aragon was faithful to the French Communist Party despite the anti-Semitism of some of its members. Why so?

This is a complex question, but Aragon became aware of the anti-Semitism of certain French Communists and also anti-Semitism in the Soviet Union after the Second World War and tried as much as possible to fight against it. But he deceived himself a lot. On this question and many others he never wanted to be in direct conflict with the French Communist Party or the Soviet Union.

During the war, Elsa Triolet and Aragon behaved with exemplary courage, risking death to work in the Resistance and publish anti-Nazi texts. Did the fact that they survived, rather than becoming martyrs, lessen their prestige in later years?

What damaged [Triolet] after the war was that she became a woman of power. The authority which she and Aragon wielded in the French Communist literary world created lots of bad feelings. Had she or Aragon been killed during the war, surely attitudes towards them would have differed greatly.

In her writings during the Occupation, Elsa Triolet was likely the first to emphasize the role of women Resistance fighters. Was she a feminist?

Yes, but Aragon too was a feminist in his own way. To his credit, starting in the 1920s in the sometimes macho atmosphere of the Surrealists, he advocated male and female equality. They were both forerunners of feminism, well before Simone de Beauvoir. Elsa could not standing living in Aragon’s shadow, and rightly so, being seen just as his wife or companion, yet even today that is largely how she is considered.

In 1944, a Gestapo chief wrote to Nazi commander in Marseilles, ordering the immediate arrest of the “Jew Elsa Kagan AKA Triolet, mistress of a certain Aragon, also Jewish.” Did the Nazis really believe that Aragon was Jewish?

This document shows that the Nazi police were not that well informed. A mystery surrounded the origins of Aragon, and his father was unknown for a long time, but now we can say he was not Jewish, either by his father or mother.

In 1938, Aragon wrote an article headlined: “Anti-Semitic is not French,” and during wartime was the first French writer to mention Auschwitz in a 1943 poem, “Musée Grévin.” Yet in another 1930s poem, “Red Front,” he also wrote, “When my beloved wife gives me a child, the first word I will teach him is ‘Stalin.’”

It’s a bit of a mystery, but I think Aragon voluntarily deceived himself about the true nature of Stalin and the Soviet regime. Being an anti-Fascist meant closing his eyes to Stalinist purges, another example of how people can lie to themselves. I insist on the lucidity of Aragon about the extermination of the Jews at a time when most French writers would not deal with the subject. [“Musée Grévin”] alone saves a bit of honor for French literature. Not just this poem, but also his articles for clandestine journals, conveying information about the existence of the gas chambers.

Why did Aragon, in the same “Red Front,” write “Shoot Léon Blum, shoot the trained bears of social democracy,” calling for violence against the French Jewish Prime Minister of France?

You have to look at when that was written. At the time, the Communists were powerful and distant from the Socialists who were seen as the enemy, collaborating with the Fascists. [Aragon] was expressing the opinion of his party. But his point of view changed quickly, and he soon embraced the approach of getting closer to the Socialists.

Your book refers to Aragon as an “exemplary Stalinist.” Was Elsa Triolet one too?

No, Elsa Triolet finally adopted the political beliefs of her husband, but was the first of the couple to become aware of Stalin’s crimes. She was likely the one who belatedly in the 60s and 70s impelled Aragon to develop a critique of the Stalinist system, so she was certainly the least Stalinist of the two. Many bad legends developed about her. Lots of people believe she manipulated Aragon to make him convert to Communism, but we know that is completely false. Many people think that her books were only appreciated by the French Communist Party, so she is seen as a manipulative woman and bad writer. She was a noteworthy writer, but much of what she produced was conventional and of her time. She also wrote fine books, especially at the end of her life, and it’s a shame they are neglected along with the others.

Author of a 2010 memoir, on Elsa Triolet, Pierre Daix recounted how in 1952, when Stalin was preparing anti-Semitic purges, Triolet returned from a trip to the USSR and told him about the Soviet leaders: “They are Nazis.” She was banned from a Soviet-backed peace conference in Vienna as a “cosmopolitan,” to which Daix asked if that was because she had emigrated to the West. Her reply: “Because I am Jewish, Pierre!”

It was curious that Aragon and Elsa kept secret the anti-Semitism that they saw in the Soviet Union in 1952-53, a time when people in Hungary were executed because they were Jewish. When Stalin died in 1953, Aragon wrote an article full of extraordinary praise for him. They knew, but said nothing. Only in ‘68 Aragon would adopt a much more critical position towards the Soviet Union, because the French Communist Party became more independent from Moscow.

Attending the Nuremberg Trials as a journalist, Triolet expressed as much loathing for the “arrogance” of American occupying forces as she did for the “hypocrisy” of Nazi war criminals.

It is even more astonishing because Elsa and Aragon went to the USA in 1939 to join a conference of writers against Fascism, and in many long articles Elsa described her wonderment at America. But that was the time when people thought that Stalin and Roosevelt would join forces against Hitler. Immediately after the Second World War, Aragon adopted an exaggerated anti-American point of view.

In 1957, Elsa Triolet finally did express some criticism of Stalinism in her novel, “The Monument.”

When you read a book like “The Monument,” which is probably Triolet’s best novel, it cannot be seen as a frank and direct critique of Communism. It remains rather measured in its criticism.

You mention that after his wife’s death, Aragon created some of his finest works. So he did not in fact require her physical presence as a Muse?

I think that even the books written after Elsa’s death were in a way destined for her and dedicated to her. The presence of Elsa is very sensible in [Aragon’s] last works.

After Triolet died, Aragon pursued gay relationships. Did this damage their legend as an exemplary heterosexual couple?

The revelation of Aragon’s homosexuality surely damaged the legend of the love he had constructed. During the last years of his life, many people cast doubt on his life and work out of homophobia. My book did not try to explain the life of Aragon at all costs, since all of our lives are obscure to ourselves and everyone else. I think it is enough to respect the mystery of his life.

Rediscovering the Author Who Was Dismissed as a Stalinist Harpy