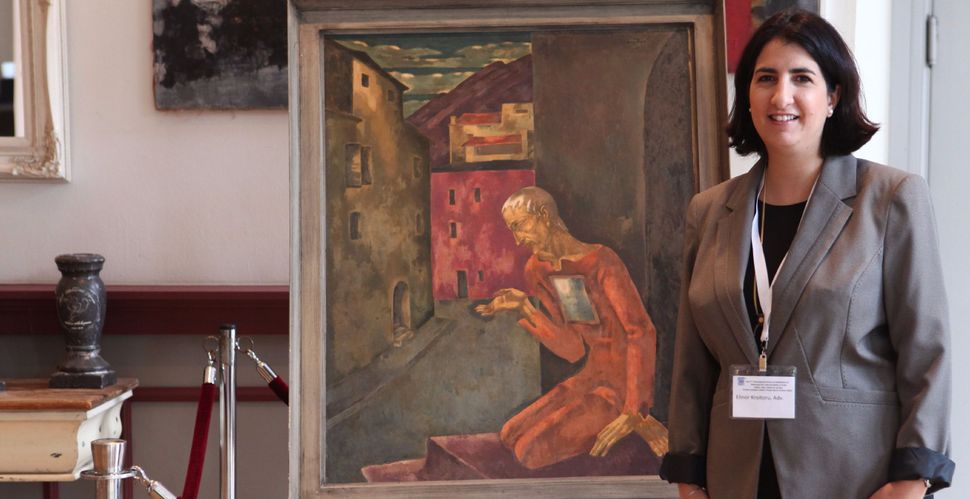 Yagna Yass-Alston, a Polish doctoral student, was on a fellowship in Israel last year when she visited the Museum of Art Ein Harod in the Jezreel Valley. She wanted to look at two paintings there for her dissertation research on Jewish art collectors in Krakow.

Looking into the museum’s inventory files, a reference to a different painting caught her eye. It was “The Beggar” by Eugene Zak, a Polish and French-trained Jewish artist from Belarus active in the early 20th century. The painting was of a man kneeling on the street; on its back in the upper right-hand corner were the initials MA-B. MA is the official designation for items confiscated during the Mobile Aktion, a widespread Nazi undertaking to remove private belongings from Jewish homes in Paris. B is for Bilder, the German word for “picture.”

Yass-Alston realized that she had just stumbled across a painting stolen by the Nazis — in Israel.

Because of her familiarity with a database for Nazi-looted art, Yass-Alston was able to learn more about the painting online immediately. Taken from a Jewish home in Paris, in 1944 it was packed with hundreds of other works of art onto a train bound for Nikolsburg, in Southern Moravia. Members of the French Resistance intercepted the train and sent it back to Paris. After the liberation of the city, it was sold, probably at a wholesale price, to a dealer or a collector.

Mordechai Narkiss, a curator in pre-state Palestine, acquired the painting on one of his many trips to Europe to bring Jewish art to the Holy Land. In 1954 he gave it to the Museum of Art Ein Harod, where it has remained until today.

Since Yass-Alston’s discovery, researchers at Hashava, an Israeli Holocaust restitution organization, have been looking deeper into the painting’s provenance in order to get it back to the family that lost it. They know the name of the original owner, but have declined to release it publicly until they can find his heirs. Its estimated value is $55,000.

The discovery of the Zak painting might bring justice for one family robbed in the Holocaust, but it also has broader implications for Israel. Hashava had long contended that Israeli museums hold Nazi-looted artwork in their collections. The Zak painting is further proof of this claim, and helps buttress Hashava’s argument that Israeli museums should open their collections to identify works with questionable origins and eventually return the artwork to the rightful owners.

It’s impossible to know just how many cultural items the Nazis stole in their plunder of Europe, though it was probably in the millions. By one estimate, some 650,000 paintings, or about 20% of Europe’s great artworks, were looted. Nazis deemed Modernist art “degenerate,” and stripped it from galleries and museums. In 1937, Joseph Goebbels, the Reich minister of Public Enlightenment and Propaganda, decided “to make some money from this garbage” by creating the “Degenerate Art” exhibition in Munich. The show, which drew millions, was meant to underscore the “necessity of a radical solution to the Jewish question,” according to a Ministry of Education and Science pamphlet. The cultural plunder continued throughout the war, as Nazis raided the homes of Jews, emptying them of private belongings. Other Jews sold their artwork under duress in order to flee Europe.

After the war, the Soviet Union reaped the spoils and transferred a huge number of items, including artwork, books and Judaica, to Moscow. The Allied countries decided to divide another portion of the loot by country of origin and send it back to those governments. Jewish groups protested this move.

“The Jewish world said, ‘Wait a minute, we are not going to accept the idea that the governments that oppressed us will receive these items and distribute them,” said Wesley Fisher, director of research at the Conference on Jewish Material Claims Against Germany. “We want these given directly to the Jewish people.”

According to Fisher, the American occupation army agreed to turn over to the Jewish Restitution Successor Organization items that clearly belonged to Jews. That group was tasked with identifying the original owners, but the sheer number of items made the project overwhelmingly difficult. There wasn’t much urgency, either. With the Jewish world more focused on helping survivors than on researching the origins of stolen art, many items were simply labeled heirless. About 40% of these so-called heirless items — numbering in the tens of thousands — were shipped to Israel.

The JRSO project wasn’t the only way that Nazi-looted items came into Israel. Collectors like Narkiss and Gershon Scholem made repeated trips to Europe to collect Jewish work and bring it back to the Holy Land. Then there were pieces donated by people eager to save Jewish culture by contributing to the fledgling Jewish state.

In recent decades, the United States and European countries have taken on the project of restituting Nazi-looted art, especially given the discovery of new troves of such artwork. In 2011, German police found more than 1,400 pieces of art in the Munich home of Cornelius Gurlitt, son of a German art collector who worked for the Nazis. A government-led task force has been charged with researching the provenance of the art in order to get it back to its original owners. Meanwhile, the movies “The Monuments Men” and “Woman in Gold” have stirred up public interest in the issue.

But in Israel there is a decided lack of momentum to research the provenance of stolen cultural items now in the country. There is no governmental budget for such a project, and Israel’s big museums claim that they can’t begin the process without the resources, said Elinor Kroitoru, a lawyer with Hashava. This is in spite of the fact that Israel is one of 44 nations to endorse the 1998 Washington Conference Principles of Nazi-Confiscated Art to prioritize locating and returning looted cultural items. Now, Hashava is seeking to advance legislation that would provide for such funding. Reached by the Forward, the Tel Aviv Museum of Art said that it does not believe it has looted items in its collection since it never accepted JRSO items, but that it lacks the resources to do a proper inventory. Requests for comment from the Israel Museum in Jerusalem were not returned.

The government and museums’ lax attitude might be explained, Fisher said, by the sense that looted items are already at home in the Jewish state, so, “Why bother?”

“From the standpoint of the family whose artwork it was, this doesn’t make sense,” he said. “If the artwork by Zak were at a French or German museum there would be hell to pay.”

Kroitoru cited one instance in which the Israel Museum returned a piece of looted art, but that was because the heir came forward to claim it, not because the museum took pains to find the heir. This was in 1997, when a Jewish couple from New York City donated a painting by the Danish-French impressionist Camille Pissarro to the American Friends of the Israel Museum. A British woman, Gerta Silberberg, learned of the painting from the publicity surrounding the donation, and claimed that it had belonged to her father-in-law, the prolific collector Max Silberberg. She had the paperwork to prove that she was the heir, and the museum restituted it to her. She let the museum keep it on display until her death in 2014 when an heir sold it at Sotheby’s for more than $28 million.

Some believe that Israel has a heightened moral responsibility to restitute the stolen works in its midst. That was the message at a recent conference on the topic at Tel Aviv University, hosted by Hashava.

“Everywhere in Israel you can find paintings that were looted by the Nazis and arrived in Israel in many different ways,” Kroitoru said at a panel discussion. “That is why it is so important for us to have a root canal, so to speak, for this problem.”

Bizarrely, one of the Israel Museum’s attempts to raise the issue publicly actually made it more difficult for Israeli heirs to get their art back. The French government asked to lend the Israel Museum an exhibit of looted artwork from the Nazi era in 2008 with the express intention of showing it to the Israeli public — with its relatively high number of Holocaust survivors and their heirs — in order to restitute the art. But France would not go through with the exhibition, called “Looking for Owners,” unless Israel guaranteed that no heirs could actually claim pieces of the show in an Israeli court. France wanted the heirs to make the claims in its own legal system. Because of this stipulation, the Knesset passed an anti-seizure law for museum exhibits. This law is now applied to almost every major exhibit that comes to Israeli museums.

The Israel Museum is now hosting “Twilight Over Berlin,” an exhibit of early 20th-century German artwork, to mark 50 years of German-Israeli relations. Hashava tried to block the exhibit on the grounds that it contains looted art, but the anti-seizure law specifies that only heirs with a claim to the artwork can appeal the decision to display it in Israel.

According to the law, the provenance of the paintings must be placed on the Ministry of Justice’s website. But Anne Webber, founder and co-chair of the Commission for Looted Art in Europe and a panelist at the conference, pointed out that a potential claimant must know that the law and the website exist, and he or she must read Hebrew. This doesn’t make it easy for heirs to come forward; in fact, none ever has.

At the conference, European experts on looted art were vocal in their bewilderment about Israel’s lack of policies and funding to rectify the Nazi era cultural crimes.

“One would expect Israel of all countries to be the leading defender of victims of the Nazi regime,” Webber said.