A Secret at the Paris Opera 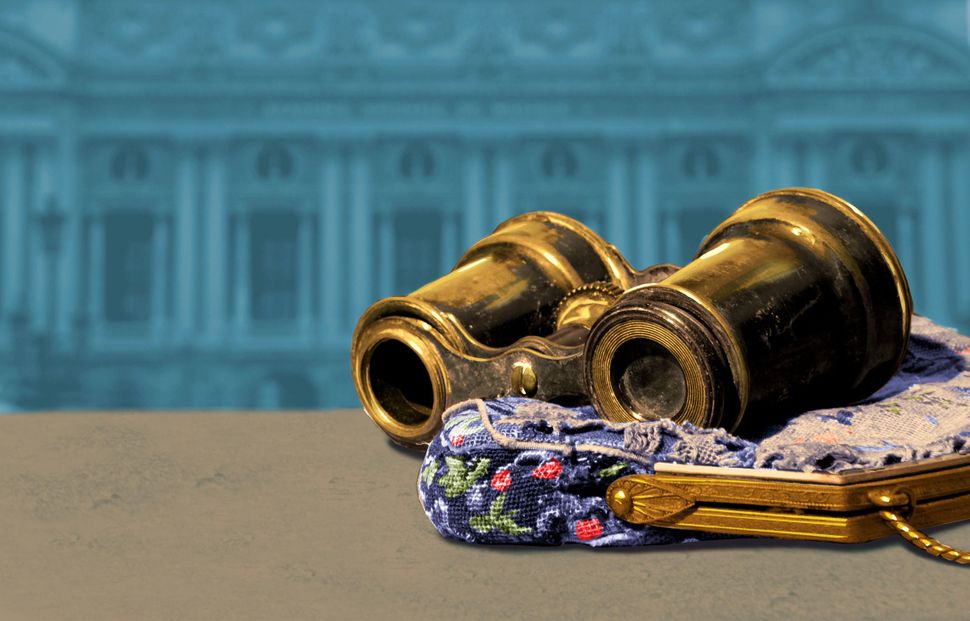 June 1964. Three college men. In those days there were no such things as dudes or guys, only men. Three undergraduates, all in Europe for the first time. After a marvelous week in London, I met up with two friends in Paris.

We had already spent more than a week there, doing the city. A day at Versailles. An evening at the Folies Bergere, where we had standing room tickets and watched scantily clad showgirls striking mildly risqué poses that at the time passed for daring. Went to Pigalle and left it as innocent as when we arrived. But now, here we were, finishing dinner in some small restaurant. Someone asked, “What are we gonna do tonight?” Someone else piped up, “Let’s go to the opera!” None of us knew anything about opera, beyond what we had been exposed to in our required Music Humanities course. But so what? It was Paris, so off we went, all three wearing grungy jeans and (me) a smelly sweater I had lived in for a week.

When we arrived, we joined a long line. My French was passable; I had been speaking it for a week and not a single Parisian had laughed at me. I asked if this was the line for standing room, at which a man ahead of us snarled, “What do you think this is, the Folies Bergere? There’s no such thing as standing room here.” At that very moment, a young woman wearing glasses walked up to us and announced that she had four free tickets to give away for the performance of “Norma” that evening, with Maria Callas in the title role. Would we like them?

Twenty-year-old sophisticate that I was, I looked her in the eye and said, “Il n’y a pas de libre dans la vie!”—Nothing in life is free! Whereupon, she responded that, indeed, they were for free, sent round by Madame Callas for her fans. We knew nothing about opera, but we knew Maria Callas was one of the century’s greatest opera stars. Free tickets courtesy of the great Callas! The man who had snarled a moment or two before looked livid. Later we supposed that Madame Callas’s assistant had picked us because grungy young foreigners who turn up at the opera must be fans of the great Callas.

Of course we would gratefully accept three of the tickets! The short elderly lady with the pinched face standing in front of us quickly turned around and volunteered to take the fourth. And so the four of us together marched up the grand staircase of the Paris Opera, not believing our great good fortune. “On ose dans la vie,” she breathed to herself as we ascended: One takes chances in life. And when we were ushered to our seats, we were stunned to discover that we had… Box Seats! Courtesy of CALLAS herself!

My two friends went into one box, the elderly lady and I into the adjoining one. Inside, she and I occupied the two rearmost chairs. Of the four other people in the box, the couple who sat in the front seats by the railing immediately caught my attention. She was blonde, with a perfectly-styled bouffant hair-do. She was exceptionally beautiful, but in a delicate sort of way, like a soft-pink rose petal. He was striking, too, though for odd reasons. He wore a steel-blue tuxedo—and he also had a bouffant. He sat sideways in his chair in order to look at her. He did so with what he must have thought was obvious adoration, though in reality he was making googly eyes and all the while simperingly smiling and whispering to her. She smiled back charmingly, angelically, at whatever he was saying.

I turned to the elderly woman, and asked her what was with his hair. Were there many men in Paris like this? She thought quietly for a moment before answering, “Yes, it is a certain style that some have… .”

During intermission, the elderly lady and I began to converse. She asked me where I was going on my trip. After Paris to Nice, then to Florence and Rome, and from Rome to Israel for the summer. I would tour the entire country, work on a kibbutz, and meet relatives whom I had heard about all my life.

I asked whether she had lived in Paris all her life. No: she had been born in Russia. Her family had fled to Paris shortly after the Revolution. I knew that many Russians who left the country in the wake of the Bolshevik victory had gone to Paris. But who was she? She offered no more, and I did not ask questions; I did not want to be the overly-forward American.

The opera went on, and on, and on. Truth to tell, I did not understand the music. I could not appreciate Callas: not her voice, not her acting ability, not the force of her personality. I was more interested in the cast of characters in my box than the ones on the stage. I thought about them throughout the opera. Was the beautiful young woman an heiress? Was he one of those proverbial French lovers? Was he genuinely in love with her, edging his way toward a proposal of marriage? Or was he a fortune hunter angling to snare his prey? And who was the small elderly, dignified woman next to me? Was her family so deeply devoted to Russian Orthodoxy that they chose exile when the Communists clamped down on the church? Had they been revolutionaries but of the wrong stripe: Mensheviks who lost to the Bolsheviks? All this tumbled through my mind as the great Callas sang.

At the opera’s end, the elderly lady and I began to bid each other goodbye. She wished me well on my trip and said she hoped I would have exciting adventures. And then she leaned-in toward me, as if to divulge a confidence. She softly whispered one word—and only one word: Adonai.

The Hebrew name of God.

Her secret revealed, she leaned away from me and straightened up. She turned away silently. And disappeared into the night.

Eli Faber is the author of “Jews, Slaves and the Slave Trade: Setting the Record Straight.”

A Secret at the Paris Opera