A Baker, A Challah and a Gun: A Tel Aviv Story 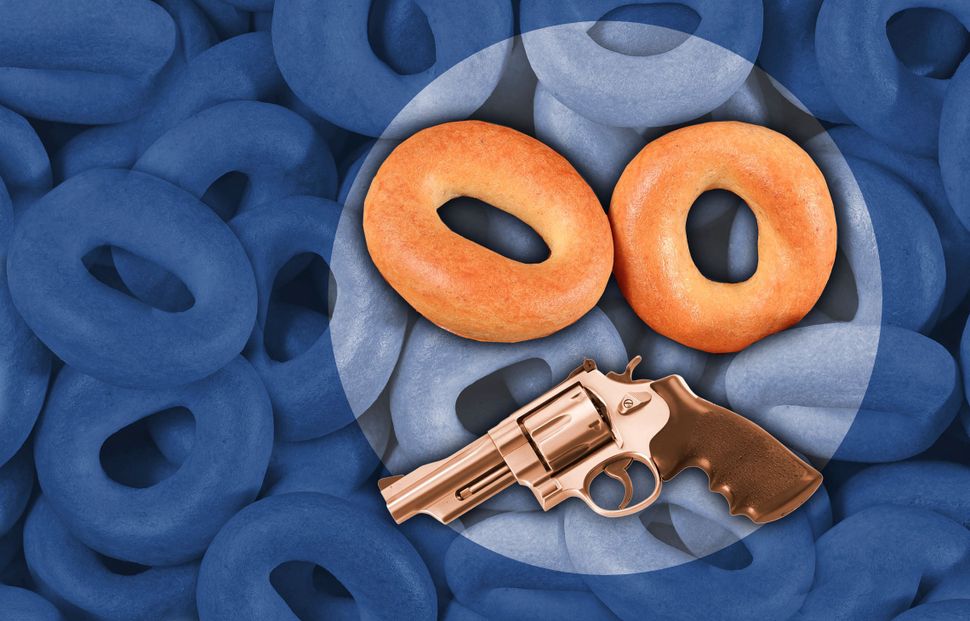 I can’t get my aggression right. It’s the register. The pitch is all wrong on the streets of Tel Aviv. Let me give you an example. I was at the shuk a few weeks back. The shuk is an outdoor market, but it is to your urban organic farmers market — the one that pops up each Saturday, featuring raw honey and heirloom tomatoes — what hairy chicken is to kale. Vendors at the shuk will hawk, in addition to fruit and vegetables, cheap clothes, generic batteries, raw fish and tourist knick-knacks. The shuk is dirty and chaotic.

It was a crowded Friday morning, only a few precious hours before commerce would shut down for the Sabbath. At other points in the week it might be possible to stroll through the shuk, sample bites and take note of things like the fact that, unlike at the Grand Bazaar in Istanbul (an experience you enjoyed, but a place where you’re not sure it’s safe to go back to just now — you’re not saying it’s not, you just don’t know), the prices at the shuk are fixed.

On Friday mornings the shuk is all business. You better come knowing what you want. Don’t even think of getting up to the stall and doing your, “So, what’s good?” Or worse, parsing the freshness, as in: “Do you make your pitas daily? Ahh, you do, very good. Okay, I’ll have the ones that were made today.” And this is definitely not the time to start inquiring about allergens or gluten — there are no nut-free bakeries here.

I was at a baked-goods stall and I had money ready in hand. I knew what I wanted. There was a mob. People were pushing, yelling, fighting among themselves. Naturally, no line or white ticket number system. Service appeared to be awarded by natural selection.

At one point, the mob caught wind from a man up front that, allegedly, the challahs were sold out. After that, not one even-keeled person remained: everyone had anger coursing through his or her veins.

I didn’t need a challah, so I started out only baseline angry. That day, my baseline anger was a compound of being overdressed for the weather and feeling hot, anticipating a looming Sabbath dinner with acquaintances whom I had run into on the street, had nothing to say to and, to compensate for the awkwardness, accepted their dinner invitation, and feeling regret over the numerous doughnuts I had eaten over the past few days. I was angry at standing in the crowd, too, but mildly so, because I thought I was making slow but steady progress toward the front.

But each time I thought I would be the next customer, somebody managed to jump in front of me. And then someone behind the person who jumped in front of me would yell at that person for jumping in front of them.

What would you do? You would intuit that you need to be more assertive, but you’d also immediately cross off the option of yelling in Hebrew. Visceral anger cannot be expressed well in stilted, accented Hebrew. You’ve heard Americans try it in taxis, but it’s not becoming.

When you realize it’s got to be English, you would cross off yelling back a direct translation of what they’ve been yelling in Hebrew. Things like: “What the hell are you doing? Are you blind? Your eyesight is a waste. You are crazy, sick… you belong in the hospital… ” just seem beside the point. What do they have to do with the price of tea in China? The point is, it’s unfair to cut the line, and just plain rude.

So you would decide to be simple and direct.

And that’s exactly what I did.

I declared, clearly and loudly, “Sir, I was here before you.”

The guy who jumped in front of me turned to me in silence. The baker-man behind the counter looked up at me, paused and then took out a gun from under his T-shirt, placed it on the counter with the grip facing me and said, dryly: “Shoot him. Go ahead, shoot him.”

What? Was the baker suggesting I had overreacted? Was he kidding me? My firm but polite assertion of my position is what crossed the line here?

I had no idea what to make of it. It was as if all the pushing, cursing (not just swear words, actual curses) that to me registered about a 9 on the combative scale were to the locals simply their “outside voice.” And in that ensemble, my firm but polite declaration was a strident discord. Overly formal, too direct, colorless — and above all, taking the whole thing way too seriously. The baker was — ironically — using his gun to lighten me up, simmer me down. And it was funny, although it probably wouldn’t be in the United States these days. Count that as another culture gap.

So I laughed. The baker laughed, too, as did the customer behind me. And then the baker immediately took my order.

I seem to have Israeli humor down. I’m still working on the right rage. In the meantime, I avoid the shuk on Fridays.

Shelley J. Klein lives in the Greenpoint section of Brooklyn. She is spending this year in Tel Aviv.

A Baker, A Challah and a Gun: A Tel Aviv Story