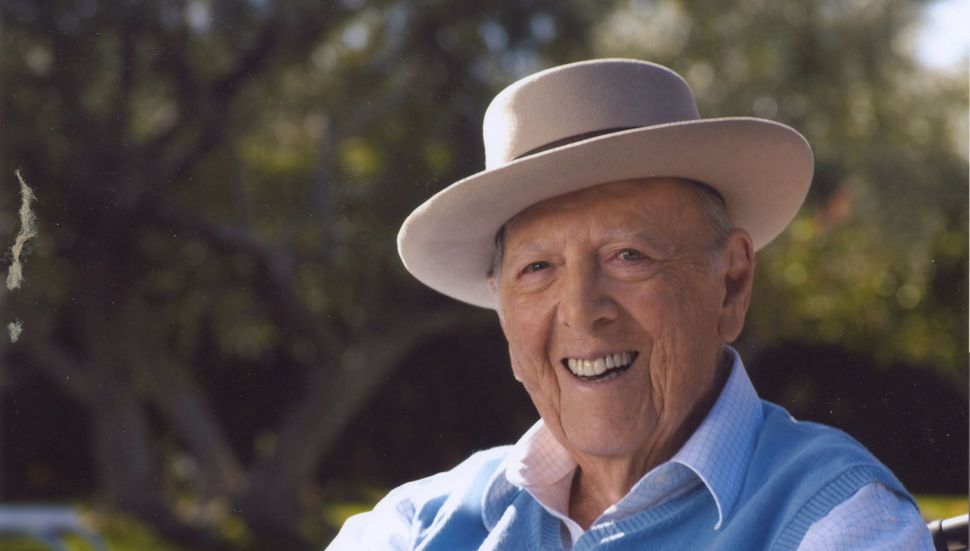 Editors note: One of the most celebrated authors of the 20th century, Herman Wouk — author of “Marjorie Morningstar,” “The Caine Mutiny Court Martial” and “The Lawgiver” — shows no sign of relenting from his astoundingly prolific output. In this excerpt from “Sailor and Fiddler: Reflections of a 100-Year-Old Author,” Wouk, who will turn 101 in May, explains how encountering historian Raul Hilberg helped to shape some of his most famous novels.

Scrawling at “Youngblood Hawke” on a favorite breezy spot looking north to the Atlantic and south to the Caribbean (when I looked, which was seldom) I was absorbed in the fortunes of my composite hero, who had come alive on the first page, drawling, “Mah one vass,” pulling from his shabby jacket a leather case of dollar cigars and lighting one with assumed calm, as he faced an editor over his huge untidy first novel on the desk. Star Pines was my best place to write, ever. The pages had piled up, I had a book-length script in hand, yet I felt the story was just getting started; and I was driving ahead with gusto when my wife came and handed me a magazine open to a book review, saying, “You’re going to write about Europe.”

An arresting remark! She knew the main task far ahead was to be centered on Admiral Halsey’s fiasco at Leyte — working title, “The Gulf” — expanded in scope and depth to epitomize the folly of industrialized war. The reviewer was British historian Hugh Trevor-Roper, author of “The Last Days of Hitler,” a notable success, and he was extravagantly praising “The Destruction of the European Jews” by one Raul Hilberg. Sarah did not explain herself. She seldom did. Perhaps she thought I was bound to touch on the European side of the war, and should read this account of what happened to the Jews. Not a bad notion, at that; I sent for the book. When it arrived, the volume at first glance was not in­viting: obscure publisher, cheap binding, a thick book printed in two columns to a page, a nuisance to read.

“The Destruction of the European Jews” changed my main task once and for all. It is a mighty twentieth-century masterpiece. It will never be a book for the many, it is too long, heavy, and dark; but the light it sheds on the human condition ensures its survival among the thoughtful few. When I finished it I wrote to the author, asking if I might visit him at the Univer­sity of Vermont, where he was an assistant professor. After this visit, because of what I learned from Hilberg, I was able many years later to write “The Winds of War” and “War and Remembrance.” Those novels might not exist otherwise.

Raul Hilberg was a reticent man, dour and difficult to know. He nevertheless responded to my approach with chill brilliance, possibly because he believed that I grasped his work. In a day of long walks on the uni­versity grounds, I described my “main task.” Writing it was no longer possible, I told him, unless I could make the substance of his book part of my story; but of that I despaired, because it happened on the other side of the planet, in another war. He listened in silence to my long anxious harangue. When I stopped talking, he did not respond for a while. Then he said, “You’ve got to go to Germany.”

It was a shocker. I said I had resolved never to set foot in Germany while I lived.

He opened up about his own work. It had originated in his master’s thesis on the Jews under the Nazis. His mentor, a Columbia social science profes­sor, like him a Jewish refugee from Nazi Europe, had written a well-regarded book on National Socialism; and he warned Hilberg against expanding his thesis on the Jewish fate to a published book. The subject was shunned and repellent, he said, and could only damage his academic career. In any case, as it stood the material needed a structure. This mentor had drummed “structure” into Hilberg, who resolved to go ahead with the book, structuring it on the Germans, the perpetrators of the massacre, not on the victims. That was the key decision.

Hilberg and I talked back and forth about how to structure a novel encompassing two different wars in two hemispheres. Of course, there was no solving the problem in a ramble around the university. I brought two things away with me for the main task: I had to go to Germany, and I had to find a structure.

Hilberg was dead right, of course, about Germany. The movie nightmare land of heel-clicking uniformed sadists and comic bumbling boobs bore no resem­blance whatever to the Germany that Sarah and I encountered, a lovely country much like France or England, the people not unlike Americans. “The Caine Mutiny” (Die Caine war ihr Schicksal) had made me fa­mous there. I visited an eminent “good German” pol­itician, Franz Josef Strauss, at his home overlooking the Rhine River, then at flood. My first words to him were “What happened?” His genial cordiality gave way to a drawn grave look. He gestured out of the window at the roaring Rhine, and sadly shrugged.

My publisher, a merry little gentleman named Wolfgang Kruger, and his starchy wife treated Sarah and me with the awed respect due a great writer, and for a little light fun took us to the Reeperbahn, the red-light district of Hamburg, where respectable folk like themselves watched comely strippers undress and gyrate. A friendly journalist took us in tow, a tall blue-eyed blond-haired fellow, Aryan to his long straight nose. For two days he brought us here and there wherever we asked, including a mass grave and a crematorium, anxiously trying all the time to assure us that “it” was absolutely over. Indeed, on the whole it seemed to be. His last plea, shouted to us as we were boarding our plane to go home, was “You can’t indict a whole people.” The Eichmann trial was imminent; the Mossad had nabbed him in Argentina. At that time, “holocaust”—with a small “h”—still meant a burnt sacrifice or a widespread destructive fire. All these im­pressions are quite fragmentary and out-of-date, to be sure, but the visit did give me a much-needed glimpse of real live Germans.

Writing about Raul Hilberg has irresistibly brought to mind Dan Gallery, the first admiral I ever encoun­tered man-to-man. In 1951, when “The Caine Mutiny” first came out, the reaction in the Navy was, in a word, “Harumph!” A fan letter I got from one Rear Admiral Daniel Gallery—“best novel I’ve ever read about the modern Navy”—was a reassuring jolt, marking him a maverick. So he proved. He asked that we meet, and it turned out that he wanted something. He had sold some short stories to The Saturday Evening Post and needed a literary agent. I suggested my own agent, and so began a friendship fully as crucial to my war novels as encountering Hilberg and his book, if not more so; though Gallery’s importance took shape only when we returned to the mainland.

Time in the tropics just slides by. Elsewhere leaves fall, sweaters come out or fold away, foods and drinks vary with the seasons, and it can snow. On Star Pines, none of that went. One needed a calendar if time mattered. For our boys it was always summertime. I was driving head-down through an endless book. My enigmatic wife grilled lunches on one or another almost deserted beach, with ice-cold martinis from vacuum jars; she most enjoyed our night forays to Katie’s, a bar where Katie, a fat lesbian piano player with a mischievous eye, played old Broadway scores to all hours. We chartered sailboats and with luck saw whales. At an exhausted halt in Hawke’s complicated downfall, I switched to a funny novel about Meltzer, which languished after a few pages. I caught my breath and lurched to the end of the endless novel. We had been on St. Thomas for five years.

Copyright © 2015 by Herman Wouk. From SAILOR AND FIDDLER: Reflections of a 100-Year-Old Author by Herman Wouk to be published by Simon & Schuster, Inc. Printed by permission.